TURBO REVVED UP TO MAKE HISTORY 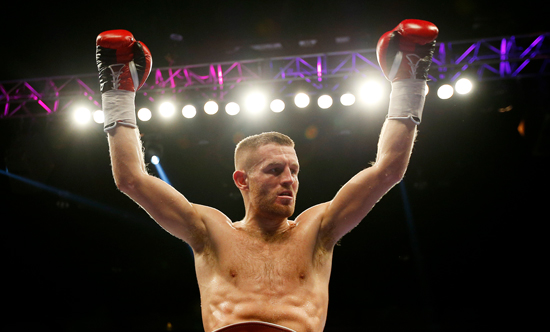 A LITTLE PIECE of English boxing history will be made on Saturday night in Manchester should Terry Flanagan overcome Maurice Hooker and make the WBO world super lightweight title his own.

Terry, the first Englishman to win a world title at lightweight, would become the first to do so at the weight above if he deals with a tough and tricky customer in Hooker.

Of course, the unassuming Terry won’t make a big song and dance about becoming a two-weight world champion, but he will gain the further respect from those in the boxing world for remaining unbeaten at the real business end of the sport.

As much as we believe our man will prevail and claim the spoils, this fight is anything but a foregone conclusion and Terry is up against a very, very confident fighter who really does fancy the job.

So does Terry though and I actually back him more in fights when he thinks he is up against it. It just seems to get the best out of him and I am obviously hoping this is the case at the Manchester Arena.

The formbook suggests it will be a close run thing, with both fighters being undefeated and ranked at one and two by the WBO, so it is the best fighting the best as far as the governing body is concerned.

It was a calculated and, I believe, correct move by Terry to sacrifice his world lightweight title and take his chances at super lightweight. Giving up a world title is not an easy thing to do and we have seen many instances where being champion has kept boxers in a division when they are past their best beforedate.

Sticking around for too long at a weight comes with consequences and often results in injuries affecting preparations or the whole time being consumed by boiling down to the limit at the expenseof honing skills or tactics.

Terry himself was hampered with a tendon problem and the weight could have been a factor in that. He has done the wise thing in moving up and hopefully he will reap the benefits.

It was a big decision at the time because it cost him the Jorge Linares fight that we had more or less made, but now he has the opportunity to win another world title and big fights like that will come around again.

While Flanagan-Hooker has the biggest prize riding on it and I suspect it will be fight of the night, it probably won’t be the one that grabs the headlines in the morning papers or online media.

They will doubtless be reserved for the return of Tyson Fury to the ring after some 30 months of inactivity.

The issues Tyson has overcome are well documented and the most important thing is that he is in a good place at the moment and seems very happy with his lot. He appears at ease with himself and it is great to see him in such a positive frame of mind.

Tyson is the lineal heavyweight champion of the world – the man who beat the man – but the focus at this point in time is shaking the ring rust out of his system and his opportunity to begin this process comesagainst the 23-1 Sefer Seferi.

The Albanian went the distance with the WBA regular champion Manuel Charr in his only defeat as a professional, so hopefully there is the prospect of getting some much-needed rounds into Tyson.

Seferi’s record suggests he is durable and the fact he is coming up from cruiserweight should make him more of an elusive target because the object of this exercise of not for Tyson to simply bash someone out in a matter ofseconds.

His first couple of fights are all about getting back in the game and we made that very clear right from the beginning. Hopefully Seferi can give him the workout to get him back on track towards full fighting fitness.

I am delighted that a big crowd will be in the arena to witness the second coming of Tyson and we will keep building on this as he gathers momentum and enters into bigger and bigger fights.

While Tyson takes his first step back towards former glories, he is joined on the card by a young heavyweight taking a big step of his own.

Nathan Gorman, at the age of just 21, takes on Dublin’s Big Sexy Sean Turner, who recently went the distance with the highly-touted Croatian Filip Hrgovic and holds a record of 12-2.

It is an ideal test for Nathan and the chance for him to demonstrate to everyone that he is a real force to be reckoned with in the heavyweight division.

With the likes of Zelfa Barrett, Lyndon Arthur, Jordan Thompson, Jack Massey and Sam Maxwell also in action, along and highly entertaining night of boxing is in prospecton Saturday.