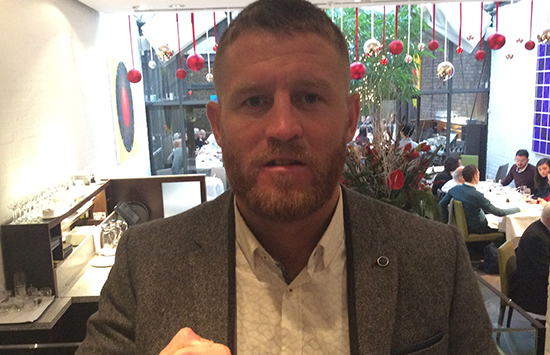 The year of 2018 will signal the bid of Terry Flanagan to become a two-weight world champion, with the former WBO lightweight king set for a tilt at the vacant WBO super lightweight crown against the unbeaten American Maurice Hooker in the coming months. In his first exclusive Fighter Diary, Turbo talks moving up and the benefits of carrying a few extra pounds…

MY DAYS IN recent months have consisted of ticking over really, staying in the gym and waiting on a date.

I’ve spoken with Frank and he is close to doing a deal for me to fight Maurice Hooker for the vacant WBO super lightweight world title and hopefully we can get the fight over here.

It has been a frustrating time waiting to make my next move, with certain fights having fallen through. Then we got offered the chance to step up and become a two-weight world champion, so obviously I was always going to jump at the chance.

I have been looking to step up for about a year now and, as soon as Terence Crawford vacated, I saw the chance to become a two-weight champion.

Other champions saying they would fight me at lightweight never turned out to be any more than talk. People still go on about the Crolla fight, but that never materialised and, personally, I don’t think they ever wanted it.

With me moving up they are all probably happy now.

I got tired of talking about it all in the end and now I can just say they are too small for me and not at my weight.

I will be a stronger fighter at 140lbs and I think it has shown since the Derry Mathews fight that I have not reproduced the spark that I showed in beating Diego Magdaleno.

The new poundage will get more out of me. Before the last few weeks were just about making weight and I wasn’t getting anything out of myself in the gym.

I will be able to spar a bit heavier now and when I am in the gym I am probably at my best at around 10st 7lbs. Getting down to spar at 10st 2lbs takes that little bit more out of you.

Hopefully I will be a better fighter at the new weight and it will prove to be a good decision.

I don’t actually believe I have missed out on fights against the other lightweight champions because I think they will move up themselves soon enough anyway.

I will have a title already and if people like Mikey Garcia and Jorge Linares want a shot I will be there waiting.

Even though Christmas is looming, I am in the gym waiting for my title shot to be signed. I have seen bits of Hooker and Steve (trainer, Maylett) thinks I beat him and is confident.

Steve is not daft and is a clever judge. I won’t give anything away tactics-wise, but we know how to beat him.

It will be a good fight and, unlike against Petr Petrov in April, he will get me out of first gear.

I need a little bit of fear and I think that is just the way I am. In camp I leave no stone unturned and work as hard as anyone.

I can imagine the feeling of losing when you shouldn’t. I saw James DeGale the other week when he could have won the fight easily by stringing two or three rounds together and stopped him. He couldn’t do that and you could see he was devastated at the end.

I don’t want that feeling.