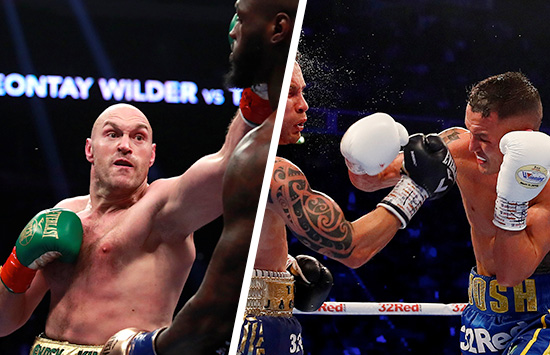 Without throwing a single punch in his direction, Tyson Fury has managed to put Anthony Joshua’s nose out of joint.

His bravura performance against Deontay Wilder has seen Fury gazump AJ in terms of public popularity.

Fan-friendly Fury is now unquestionably the People’s Champ. Like his Queensberry stablemate, the other Josh (Warrington), he is in strong contention for Fight – and Fighter – of the Year.

Frank Warren’s warriors not only have become Britain’s favourite boxers but are the top draw attractions in the fight game here.

Fury’s ring renaissance in Los Angeles and his personal rehabilitation has won the hearts of the fans and acclaim of the media while Warrington has emerged from being the most understated fighter in the land with his brilliant IBF featherweight title win against Lee Selby and subsequent defence against former two-weight champion Carl Frampton.

Significantly Warrington and Fury are rated numbers three and four respectively in the current Boxing News assessment of World Fighters of the Year; behind only Oleksandr Usyk and Vasyl Lomachenko and ahead of guess who? Anthony Joshua, who was booed when introduced at the O2 last month after he refused to name his next opponent.

The fans obviously want it to be Fury. Could it happen? Tyson thinks not. “I’m sorry to disappoint the sports fans, but Joshua, even with two hammers in each hand, could never beat Tyson Fury and they know that,” he says. “They’re not silly.

“And it’s a business as well. So they’re not going to take the fight, simple as that.

“They may say they’ll take the fight and talk about it and then fight somebody else, like they keep doing.

“That fight ain’t gonna happen. So I’m not holding my breath at all.”

Well, we’ll see, My prediction for 2019 is that Fury will win a return contest with Wilder – who remains WBC heavyweight champion despite

that hugely dodgy draw – and still be fresh enough at 32 to prise away Joshua’s three belts within the following 12 months.

As for Leeds dynamo Warrington (I was one of the few who predicted he would not only win the IBF featherweight title from Selby and successfully defend it against Frampton) it is also onwards and upwards in 2019.

The unbeaten 28-year-old looks set for a unification bout against one of the division’s other belt holders: WBO champion Oscar Valdez, WBA champion Leo Santa Cruz or WBC champion Gary Russell Jr. I believe he could out-hustle any or all of them because this perpetual underdog can really bite.

LAST WEEK WE recounted how ex-champion boxer Mark Prince, OBE, must have relived the nightmare of his teenage footballer son’s stabbing 13 years ago with the similarly fatal wounding of a 51-year-old father on a suburban train.

Within a couple of days we learned that knife crime also took the life of Jayden Moodie, a 14-year-old who was hoping to become a boxer. He had just been given his first pair of gloves and was about to join a club.

Boxing has proved it can change lives, and sometimes save them, though sadly it never had the chance to do so in Jayden’s case.

As Frank Warren has pointed out, perhaps if those responsible for the attack had themselves got involved in sport they may not have ended up increasing London’s horrific knife crime statistics. And Jayden would still be alive.