Tyson Fury is not as daft as some people think. Come what may, when he wakes up in Dusseldorf on Sunday morning he’ll be well over £2 million richer. And he could be the new heavyweight champion of the world. But I wouldn’t bet on it. 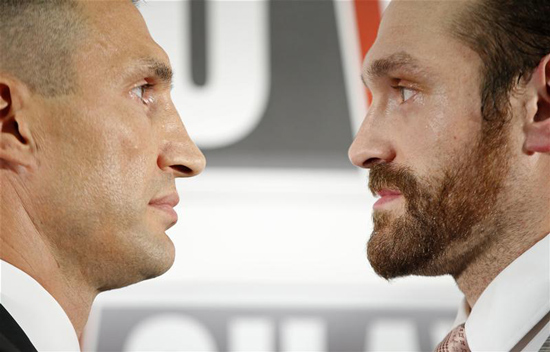 Well I might – but it would have to be very small bet. Any substantial wager must be on Wladimir Klitschko pounding out another remorseless victory over the lippy giant Gypsy King who now admits if he doesn’t win the title he be left with egg on his face. And a smattering of the red stuff, too, I shouldn’t wonder.

Of course there is no such thing as a racing certainty. Nor a boxing one. When two big men collide anything can happen. Remember February 10, 1990.

If Fury wins tomorrow night it surely will be the most seismic upset in heavyweight boxing since 42-1 underdog James ‘Buster’ Douglas left the other Tyson – the seemingly indestructible Iron Mike – scrabbling around the floor of the Tokyo Dome on his knees like a drunk looking for a discarded cigarette butt on a bar room floor.

Make no mistake, while at 27, and 6ft 9in Fury may be younger, bigger and unbeaten in 24 contests, he is up against it in Germany. If the fight was here I’d have given him a better chance.

I think a lot of what Fury says and does is for effect, although it can be worrying at times, not least when he lets his toilet mouth run away with it. Sometimes he appears to be not quite the ticket, going well beyond the realms of pre-fight hype.

A lot of it will hinge on his questionable temperament. Over the past few weeks Fury has been ranting and raving, true to form, but I’ve noticed that as the fight approaches he’s become much quieter and seems more respectful of Klitschko. Maybe he is beginning to realise the enormity of his task.

Klitschko has won all sorts of battles before the fight starts, principally in getting the fight on in Germany where, although he is Ukrainian, he is regarded as one of their own.

I found it interesting that when we were negotiating to get the fight over here, Klitschko and his people put up all sorts of obstacles, including wanting to bring their own doctor to supervise the medical procedures. I found that interesting. Why would he insist on that?

Fury’s best win unquestionably was his second fight with Dereck Chisora, but that may be as good as it gets. Against Wlad’s big brother Vitali, Chisora had shown how to frustrate a Klitschko by taking the fight to him. Neither of them like being pressed.

Fury has an advantage in size on mobility and he does have an excellent jab, plus the ability to switch hit. So I don’t write him off altogether. However, being realistic, Fury hasn’t got the greatest chin in the world, though he does get up after being hit. But safety first Klitschko can be a truly damaging puncher and he knows how to systematically wear down opponents and rough them up.

Fury will struggle to get a points decision in Germany and I don’t feel he has sufficient power, even for such a huge man, to knock-out Klitschko. I think if he is still there around the eighth it will be with the realisation he is in a different league.

You wouldn’t call Klitschko charismatic but you would call him classy, and in the end it is his professionalism, plus his superb physical condition which are likely to be the decisive factors.

As the Ukrainian says, experience can’t be bought in a shop.

Klitschko may be nudging 40 but he is a well preserved specimen of a fighter who, like Floyd Mayweather jnr, never strays out if shape and rarely puts a fist wrong defensively.

However, as has been said many times in boxing, the legs can go in one fight and Fury’s main hope has to be that age will suddenly catch up with the multi-belted champion.

Will this be the moment when it happens with Klitschko? Personally I don’t think so.

True, there were some signs that he was beginning to show his age in his last fight in New York against Bryant Jennings but a couple of bouts prior to that he had dealt with typical efficiency his former fellow Olympic champion, the Russian Alexander Povetkin: a man few would expect Fury to beat.

Fury, among other things, is obviously someone possessing intense religious zeal. But does he have a prayer against the most enduring heavyweight champion since Joe Louis?

Let’s hope he doesn’t end up on his knees.

No easy touch for DeGale 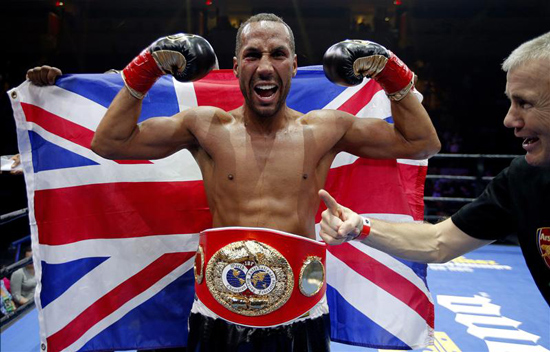 Also tomorrow night, another Brit will be involved in a world title fight when James DeGale makes a first defence of his IBF super-middleweight title against Lucian Bute in Quebec. I happen to think this is a tougher job for DeGale than it may seem.

I know Bute has had a poor performances at the top level against Jean Pascal and of course, Carl Froch who blitzed him out in five rounds, but this is in Canada fighting in front of his home fans and I thought there were moments when DeGale won the title against Andre Dirrell that he looked vulnerable.

If Dirrell had shown a bit more ambition the result could have been different. Believe me, this is no foregone conclusion.

Can Canelo tame the Triple G-Force?

It may have lacked the epic intensity of some of the previous fights involving both men, but I am sure BoxNation viewers will agree that last weekend’s encounter between Saul ‘Canelo’ Alvarez and Miguel Cotto in Las Vegas was absorbing and extremely watchable, not least as the result poses what currently is boxing’s most intriguing question.

Does Alvarez have the guile to take on and beat the beast from the East, Gennady Golovkin? There is no doubt he has the gumption.

“Give me the gloves, I’ll fight him now, he declared in the Mandalay Bay ring seconds after his hand was raised as the clear winner and new holder of the WBC middleweight belt that game old warhorse Cotto had sacrificed even before the bell over a financial dispute with the governing body. Spoken like a true Mexican! 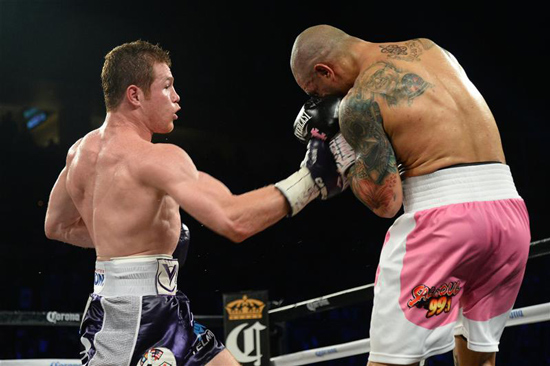 Alvarez has two weeks before the he needs to commit finally to a decision but it seems his mind is already made up. He’ll take on Triple G, the world’s outstanding pound-for-pounder who has won his last 21 bouts by ko.

I thought Alvarez fought very well against Cotto. He was very calm, put his punches together intelligently, commanded the centre of the ring and waited for Cotto to come to him. His counter-punching was eye-catching – quite literally – and he’s a heavy hitter.

Cotto has been a great champion, but it was a classic case of a good big ‘un beating a good little ‘un and the advantage always seemed to be with the much younger man.

At 25 Alvarez is only going to get better, but whether he is yet good enough to beat the great Golovkin, well, I have my doubts. Alvarez might be the linear champion – for all that is worth – but Golovkin has more belts and, more importantly, the power to break down the extraordinarily solid Mexican.

Both can box and bang but the Kazakh seems to have the more devastating weaponry in his armoury.

Oscar De La Hoya has announced that Canelo’s next two fights would take place in May and September of next year. ‘Cinco de Mayo’, a celebration held on May 5 to commemorate the Mexican army’s victory over French forces at the Battle of Puebla in 1892 seems an ideal date if they can come to terms with Golovkin, who surely will be up for it. It would be massive in Mexico – or indeed anywhere.

It is a match-up both Andy Lee and Billy-Joe Saunders, who contest the WBO title in Manchester on December 19, will be scrutinising very carefully, because that’s what good fighters do with potential opponents.

Either would step up to the plate to meet the winner, though, as I’ve said before, if it’s Billy-Joe, as I hope and anticipate, I’d like to see him get a couple more big scalps under his belt first.

In a week when the Government decides sport was important enough to award it an extra £29 million in Exchequer funding, it seems the BBC take a sharply different view.

They are cutting £35million from their TV rights budget, but in their infinite wisdom have still managed to scrape together a few bob to cover what we are told is “the computer games world championship league of legends.” It will be shown over four days on BBC Three.

Hurrah! Can’t wait for that one. No doubt parents will be delighted that their kids will be stuck indoors watching this nonsense instead of being encouraged to go outside and play proper sport –which the Beeb hardly seem to bother about these days.

Instead they are offering the X-Box Factor. What a joke!

What is going on there? Like many I am tired of asking, for example, why the Beeb continues to ignore a sport like boxing with its burgeoning interest and success at both amateur and professional level.

There are now ten British world boxing champions but you can be certain none of them will come within sniffing distance of this year’s Sports Personality award because they have had little or no exposure on BBC screens.
Time someone at the top of BBC’s ivory tower got their ears boxed, don’t you think?

Tomorrow: Read Hubbard’s Cupboard on the re-making of Haye.