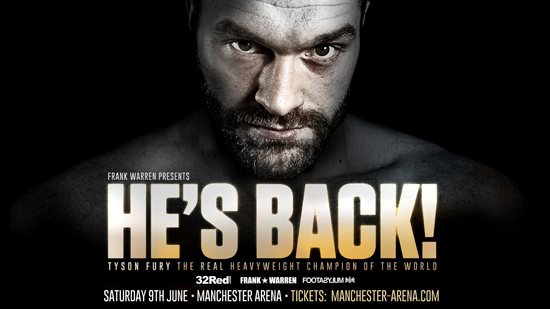 The former undefeated linear, WBA Super, WBO, IBO and Ring Magazine Heavyweight Champion of the World will make his highly-anticipated comeback at the Manchester Arena on Saturday 9th June.

Fury shocked the sporting World in November 2015 when he sensationally dethroned long-reigning Heavyweight icon Wladimir Klitschko in one of boxing’s biggest ever upsets in recent years at the Esprit Arena in Dusseldorf, Germany.

The self-proclaimed ‘Gypsy King’, 25-0 (18 KO’s), has been back in full training working towards his long-awaited comeback fight and is determined to prove that he is still the man in the Heavyweight division by reclaiming all of the belts that rightfully belong to him.

“The King has returned,” said Fury. “I’m back to reclaim what is rightfully mine. This is going to be an interesting journey. There’s a lot of fascinating challenges out there for me and I’m looking forward to getting started. I can’t wait to get in the ring and put on a display for all of my fans.

“I’m the fittest that I’ve ever been. My timing and my reflexes are better than they’ve ever been. I’m coming into the prime of my career and I’m more confident than I’ve ever been. All of my focus is on my return at the Manchester Arena on June 9th.

“All of the current Heavyweight Champions out there are very vulnerable and very beatable.”

“The Heavyweight division should now be put on notice because the lineal Champion will be back on June 9th and will be looking to pick back up where he left off,” said Warren.

“I am thrilled that Tyson has entrusted us with the responsibility of recharging his career and to steer him back to where he once emphatically belonged.

“Were it not for his exploits in Dusseldorf on November 28th, 2015, the now thriving and fascinating Heavyweight scene might have remained stagnant, but Tyson’s comprehensive schooling of the long-standing Champion Wladimir Klitschko opened all sorts of doors from which others have ultimately benefitted.

“Now Tyson is back, in fantastic shape and full of beans, ready to take the first step on the road back towards World domination once again.

“I am certain the boxing public – who he never lost the affection of – will get behind him in force and support his journey – starting at the Manchester Arena on June 9th.”

Tickets for Fury’s long-awaited comeback fight are available to purchase now via the Manchester Arena on www.manchester-arena.com and tel: 0844 847 8000