TYSON HAPPY TO WALK ON THE WILDER SIDE

TYSON FURY HAD absolutely no hesitation in agreeing to do what the great fighters do. That is to readily accept the challenge of taking on the best out there in the biggest fight there to be made.

Jumping back in at the deep end against the unbeaten WBC heavyweight champion Deontay Wilder just two fights into his comeback after some two and a half years out of the ring speaks volumes for the man and the competitor inside of him.

It is a big leap of faith and quality, make no mistake, but Tyson’s mindset has altered since he was first planning his return. He hasn’t been the most active fighter over the years anyway and he probably needs the motivation of a fight that will capture the imagination of the public.

The public, I am sure, will be right behind him in his bid to add the WBC belt to his collection and begin a second reign as heavyweight champion of the world.

It is just a pity that some people in the business find the need to cast doubt on the validity of his intentions, which is to do what the great fighters of yesteryear used to do on a regular basis.

The best heavyweights used to fight the best, over and over again in some cases and the fight fans would accept nothing less from these true lords of the ring.

Perhaps the thinking behind the attempt to muddy the waters of Tyson’s tilt at the current top dog of the division is to deflect attention away from the fact that it is a fight their man Anthony Joshua wanted no part of, despite all the typical bluster insisting otherwise.

Barry Hearn pretty much gave the game away last week when he confessed that his preference would be to wait for two more years before Joshua takes a walk on the Wilder side.

By then Wilder would be nudging 35 and the Team Joshua coffers would be swollen by the proceeds of another six or so safer options. If the objective is to simply protect the investment, then so be it and it is up to them, but Tyson is stepping up now and should be given enormous credit for doing so.

I don’t understand the thinking though because top fighters don’t want to do that and they should want to fight the best of their generation.

Whatever you think of Tyson, you cannot take away from him that he travelled to Germany to take on Wladimir Klitschko when he was in his pomp and now he is going over to the States to fight Wilder.

That is what the best fighters – win or lose – do.

There is a precedent of such a blatant protecting of a financial asset because Hearn did the same thing with Chris Eubank. You might recall the ‘world tour’ when they were going to travel the globe taking on the best and ended up fighting in South Africa, Wales, Scotland and England.

Sky cancelled it and pulled the plug because the quality of opposition was of such low level. In fact, despite him taking part in some memorable domestic clashes, Eubank was continually steered away from the top Americans and didn’t fight the likes of Michael Nunn, James Toney or Mike McCallum.

It wasn’t until he came to me that he was put back in proper fights against my guys and he lost all of them against Steve Collins, Joe Calzaghe and Carl Thompson.

Joshua, as an Olympic gold medallist and world championship runner up, has done what he’s had to do since turning pro and picked up his world titles that were relinquished by Tyson against non-elite opposition and a Klitschko that had seen far better days and subsequently retired.

He has not fought anyone like the calibre of Wilder – a real live one. That is what Tyson is happy to do and that is the difference.

Going in with Wilder might well be bad for the family business, but the fans will see right through it eventually and will not stand for it. I don’t doubt there will be a bumper crowd at Wembley for his defence against Alexander Povetkin, but we have been spared the usual trumpeting of a ten-minute sell-out.

It could be the fans who were at Joshua’s last fight and saw Povetkin up close against David Price were not overly impressed and haven’t felt the urge to rush out and snap up the tickets.

They know what they saw and they haven’t been taken in by it.

The bottom line is with the Wembley show coming up is that it doesn’t come close to the pedigree that will be brought into the ring by Tyson and Wilder, which is a proper fight and the sort the fans want to see.

If the criteria is to just continue milking the cash cow against lesser opponents then, true enough, it is a great business model, but people won’t stand for it for much longer and will think twice before keep stumping up their hard earned. 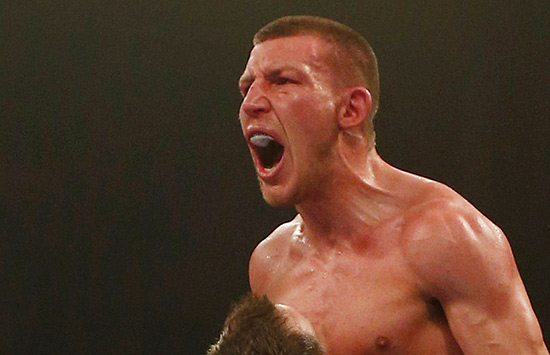 IT WILL BE good to see Liam Williams return to the ring on Friday, getting back in the groove with his new trainer Dominic Ingle.

His fight in Cardiff will provide a useful sharpener before we get him back in a big fight against JJ Metcalf later in the year in what should be a real cracker of a contest.

It is a fight that we will apply to have eliminator status attached to and a world title shot will quickly beckon for the winner.