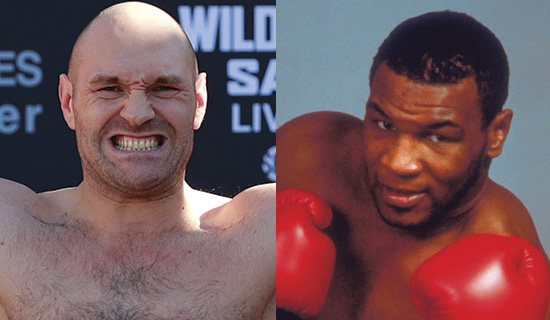 I am a bit of an insomniac – well, rather more than a bit – and counting sheep does not count me out.

So as a long-standing fight fan I have started turning over in my mind dream clashes between boxing’s greats that might have been.

No doubt many of you have done the same thing: Would Muhammad Ali have beaten Mike Tyson, or Joe Louis; how about Sugar Ray Robinson versus Sugar Ray Leonard? Or Joe Frazier against Rocky Marciano (some bloody war that).

There are scores and scores of them. Would either or both the sweet Sugars, Robinson and Leonard, overcome mouthy Floyd Mayweather? Another mental match-up I would love to have witnessed is he fabulous ‘Hammerin’ Hank’ Henry Armstrong or Roberto Duran or Manny Paquiao pitted against the new brightest star in world boxing, Vasily Lomachenko. Or how about Canelo Alvarez or Gennady Golovkin against Carlos Monzon?

I have always maintained that Ali would have out-psyched and out-fought Tyson, though many disagree. Iron Mike would have become so frustrated and then enraged by Ali’s antics and taunting that he’d lose his rag and probably munch on Ali’s ear as he did Evander Holyfield’s.

There was that ‘dream fight’ between Ali and Marciano when both stepped into the during The Greatest’s exile to square up and exchange choreographed blows for the computer. Did Ali win? The computer said No. It declared Marciano the victor by 13 round ko.

I would disagree with that outcome. And actually, so did Marciano himself.

I talked with him about that computer video when he was here just before his death in August 1969 in a plane crash. He was a guest of the Boxing Writers’ Club at a London lunch and he admitted quite emphatically that he would never have beaten Ali had it been a real deal. “He was too big, too fast and too smart for me,” he said. ”I could never have pinned him on the ropes long enough to land my Suzy Q” (his lethal right hand bonecrusher that helped despatch some 43 of his 49 opponents during in his record unbeaten reign).

Recently however one make-believe fight I have been repeatedly turning over in my mind is a truly intriguing one: Tyson versus Tyson.

How would Tyson Fury have handled his namesake, the baddest man of the planet after whom, of course, he was named by his father, British heavyweight title contender Gypsy John 30 years ago.

I am in two minds. The brute force of the young Mike Tyson who quickly and savagely crushed the likes of Michael Spinks, Trevor Berbick and Larry Holmes surely would have done the same to a similarly young and and relatively raw Tyson F.

But had Fury deployed the same intelligent hit and hop it technique he did to sensationally relieve Wladimir Klitschko of his long-held world heavyweight titles, or the valour and astuteness he showed to draw with (and beat on my card) Deontay Wilder after rising from the dead, might it have been a different matter?

Maybe. Certainly had the new Fury faced the older Tyson who succumbed to Lennox Lewis and Danny Williams he would have stopped him as they did. Tactically it would have been a really fascinating fight when both were at their peak but in that situation I must give the edge to Iron Mike by a late stoppage.

Mike Tyson, who once said he would be dead by 40, is now 52 and likely to be at ringside when Fury faces Tom Schwarz at the Thomas and Mack Center in Las Vegas on June 15.

The 24-year-old German boasts an unbeaten record of 24-0 with 16 KOs but has never fought anyone of Fury’s calibre and has only ever boxed outside of his home country twice before.

It is unlikely that Schwartz will bother him as much as Mike Tyson would have done but he might give him a half-decent scrap and Fury is always entertaining. The fight will be televised live BT after the exclusive screening of Josh Warrington’s IBF world featherweight title defence against Kid Galahad on Frank Warren’s blockbuster Leeds show.

Mke Tyson is no longer allowed to visit the UK following a change in immigration laws in 2012 which now forbids anyone sentenced to more than four years in jail to enter the country. Tyson received a six years sentence in 1992 for rape, but served only three.

These days he is a much reformed character and nicer person, rather like his British namesake.

Tyson versus Tyson remains a in-your-dreams fight but one which keeps flickering through my mind as I try to nod off at night is a future collision between Fury and Anthony Joshua.

All being well it should happen next year. Please don’t let that be a pipedream too.