Tyson’s a pussycat compared to the fury of Iron Mike

The Sports Journalists Association, of which I am a member, have withdrawn their invitation to the new world heavyweight champion Tyson Fury to attend their annual awards annual awards on December 17 and one presumes any votes already cast for him to be their Sportsman of the Year will be discounted.

A spokesman for the SJA said: “We are aware of threats made by Tyson Fury against one of our members, and therefore feel that it would be incompatible with the nature of our event, or the interests of our members, our other guests and our sponsors, for us to continue to extend a welcome to Tyson Fury to our awards next week.”

I think they are wrong, bang out of order in climbing aboard the anti-Fury bandwagon and I am surprised that some of my colleagues should take such a prissy stance.

The threat in question was a warning from Fury that one of his mates would sort out and ‘jump on the head’ of Mail on Sunday sports columnist Oliver Holt who reported the extreme views which have caused so much controversy since Fury spooked and dethroned Wladimir Klitschko.

Fury claims these were made in jest, and I suspect he’s right, though in the circumstances I feel fortunate that he only told me to ‘eff-off’ when I once remonstrated him for the foul language he was using before an audience which included women and children.

He says he has only ever read one book – the Bible. How he can equate such obnoxious views with the Holy Scriptures, even his oft-quoted Leviticus 20:13, is beyond comprehension.

Meantime he remains in the running for the BBC Sports Personality award though his 4-1 odds have lengthened and his hopes of winning are surely, as Muhammad Ali used to say, slim to none.

Although you never know. It is possible some might be perverse enough to vote for him in an age when such behaviour might be perceived as sheer laddishness. There is an element of the populace that likes that sort of thing.

But to bar him from an awards ceremony is nonsense. Not for a moment do I agree with a word of Fury’s inane utterances but I respect his right to air them and make himself look an idiot in doing so.

Except when he makes statements as he did this week telling dissenters to ‘suck my balls’ and calling on those who signed a petition demanding he is banned from SPOTY’ a bunch of w******’.

Had any footballer made such crass remarks in public the FA would throw the book at them. Similarly I expect the Board of Control to extract a further hefty fine from him when he is up before them for again bringing the sport into disrepute. Not that this will deter him.

But what’s in a name?

Compared to his illustrious namesake Mike Tyson, the man his father so so admired that he named his son after him, Tyson Fury is a pussycat.

Whatever Fury has said and done is violence of of the tongue. While he has indulged in rabid ear-bashing he hasn’t actually tried to gnaw off an opponent’s shell-like, as Tyson did Evander Holyfield’s.

Or bite into an opponents thigh as Michael Gerard Tyson did when rolling around the floor with Lennox Lewis before they fought – when he also threatened to devour his kids. 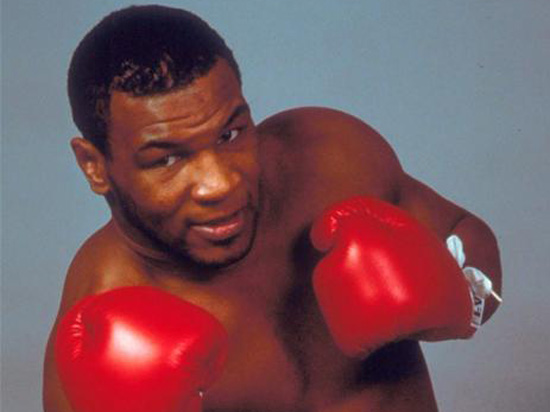 Tyson has been convicted of rape and assault, and has claimed he even used a false penis to dupe the drugs testers when he fought Lou Savarese in Glasgow.

Here are just a few examples from the other Tyson’s dark persona.

“Lennox Lewis, I’m coming for you man. My style is impetuous. My defense is impregnable, and I’m just ferocious. I want your heart. I want to eat his children. Praise be to Allah!

“My main objective is to be professional but to kill him.”

“You’re sweet. I’m going to make sure you kiss me good with those big lips. I’m gonna make you my girlfriend.”

“I paid a worker at New York’s zoo to re-open it just for me and Robin (Givens, his first wife). When we got to the gorilla cage there was 1 big Silverback gorilla there just bullying all the other gorillas. They were so powerful but their eyes were like an innocent infant. I offered the attendant $10,000 to open the cage and let smash that silverback’s snotbox! He declined.”

“I try to catch [other boxers] on the tip of the nose, because I try to push the bone into the brain.”

“I wish one of you guys (reporters) had kids so I could kick them in the f****** head or something, or stomp on their testicles so you can feel my pain. Cos that’s the pain I have waking up everyday.”

And here is what he said to a reporter in the crowd who made a comment to him that he did not like:

“White boy, faggot, you can’t touch me you’re not man enough, I eat your ass all alive, you bitch, can’t anybody in here f*** with this, this is the ultimate. F*** you, you hoe! Come say it to my face, you bitch. Come on you bitch, you’re a scared coward, you’re not man enough to f*ck with me, you can’t last two minutes in my world bitch. Look you scared now, you hoe. Scared like a little cracker bitch. Scared of the real man! I’ll f*** you till you love me.”

Nice, eh? So much for the furore over Fury. It makes him seem like Mary Poppins.

What the two Tysons have in common, apart from being avid and knowledgeable students of boxing history, is that both are admitted schizophrenics, nice as pie one moment, charming, friendly and funny, then giving a passable impersonations of being a raving nutter the next, dragging their language from the cesspit.

Fury has acknowledged that his is a mood-swinging, Jekyll and Hyde personality but believe me Iron Mike was infinitely more intimidating, frighteningly so, an animal in the ring and out.

I seriously doubt that Fury would have lasted more than a round had he fought the Tyson who became the world’s youngest-ever ever heavyweight champion.

Interestingly, in a somewhat anodyne ITV interview with Sir Trevor McDonald at his Las Vegas home this week Tyson, now 49, seemed a man at ease with himself, saying he now only wants the quiet life as a doting family man.

Perhaps this might be Fury in a decade or so.

But at the moment, stripped of his IBF title and with the police, the Board of Control and the media on his back, his life is anything but quiet.

Whatever we may think of him we are in for a lot more sound from Fury.

He says most of it tongue-in-cheek.

Maybe. But he’d be better off keeping that tongue between his teeth, and firmly bitten.