So the big man was as good as his word. He did what he said he would, he talked the talk then walked the walk.

Tyson Fury’s stunning acquisition of Wladimir Klitschko’s heavyweight crowns seems to have ‘shook up the world’ just as another underdog, Muhammad Ali, did when he upset all the odds to dethrone the so-called unbeatable ogre that was Sonny Liston half a century ago.

Now the new Gypsy King of the Ring promises he will be the most charismatic heavyweight champion since Ali himself. I don’t doubt it – but will he ever approach anything like Ali’s universal popularity, or even that at home of another former British world heavyweight champion, Frank Bruno?

That is up to Tyson himself.

Perhaps he should take a leaf out of the book of another fellow Brit who won a world championship at the weekend – Andy Murray, who led GB to an historic triumph in tennis’s Davis Cup.

On the face of it the only similarity between them is that both achieved their respective successes on foreign soil – Tyson in Dusseldorf and Andy in Ghent – and are expectant fathers. But there is one common denominator in that both love boxing.

However there was a time when we never took to Murray -at least, south of the border. He was simply that charmless, surly Scot. A perennial Nearly Man. Then he won Olympic gold and Wimbledon, lightened up and showed he had a much warmer and more endearing side to his persona, even a sense of humour.

Fury can be become one too – if he wishes. He just has to mind his Ps and Qs. He can be quite an amusing guy and there’s a decency under that ultra-brash facade.

He well beat Klitschko, who was never at the races. Now his next battle is to really win over the British public, apart from immediate family and friends from the Romany community.

He has never had a massive home following, perhaps because of his Jekyll and Hyde-type personality and often outlandish opinions expressed loudly and sometimes with unacceptable profanity.

Yet he can be Mr Nice Guy when the mood takes him and now he has genuine status in the fight game he must portray himself more as a champion, a clean-living deeply religious family man who spurns the celebrity lifestyle, and less as a clown.

Lennox Lewis is among those who believe he must modify his behaviour to gain total acceptance.”Now he’s champion he has to behave himself a little bit more because there are a lot of kids and people looking up to him,” he said.

No-one is asking him to totally change the way he is – not that he would anyway. But what he must do is curb some of more outrageous behaviour that invoked the opprobrium of the media and the punitive wrath of the Board of Control.

Let’s be honest, this was far from the greatest-ever heavyweight title fight. It was scrappy, untidy and more miss than hit. But in the circumstances Fury fought intelligently and ironically the only damage he suffered was a blistered big toe – just as David Haye did against Wladimir. But he didn’t need to complain about it!

I always felt that someone who could switch stances and jab as efficiently as Fury would beat Klitschko but I talked myself out of tipping him as I never thought he would get a decision in Germany, where judges have been notoriously ungenerous to visiting fighters. But he did, and good luck to him. At least its shows the game is straight.

He is in the big-money league now, of course. It looks likely there will be a return with Klitschko, but I’d be wary of any talk about it being at Wembley next summer as my understanding is that the return clause stipulates that any rematch has to be in Germany; though of course money always has the last word in boxing.

But at least he’ll get the thick end of the purse this time. By then, clueless Klitschko, whose creaking legs could only transport him further into negativity, will have passed his 40th birthday and unless he can construct a more positive Plan B to counter Fury’s unpredictability the probability is that he will lose to him again, perhaps even more comprehensively.

Not one critic had forecast such a sensational Fury victory, though several pros did. One who got it spot was his his fellow Traveller Billy Joe Saunders, who I hope and anticipate, will become Britain’s 12th world champion when challenges Andy Lee for the WBO middleweight belt in Manchester on 19 December

“I’m fully backing Tyson,” he had declared. “I know what heart this boy’s got He definitely won’t s*** himself like most of the others. He’s no average fighter. He’s as fast as a middleweight and Klitschko can’t handle speed. 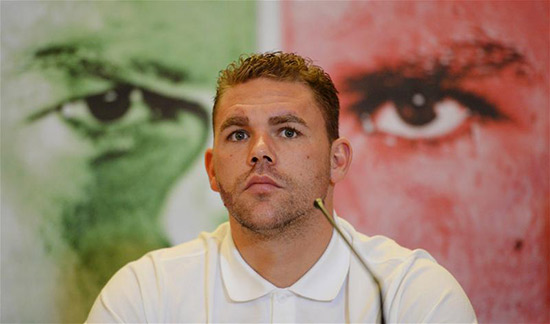 Tyson will make it a proper fight. He’ll arrive with heart and gloves and give it a real go.

“People will be surprised how comfortably Tyson beats him. He might jump, on him in round one and catch him cold but I think he’ll dance around him all night.

“Klitschko is pretty stiff and Tyson’s the fastest heavyweight around. I think Tyson will do it if he boxes clever. Anyone as daft and fast as him can get under anyone’s skin.”

I may have helped in some small measure when Tyson was boxing for me by warning him and his astute trainer and uncle Peter Fury- he did a fabulous job by the way – of some of the sly ‘gamesmanship’ that with which the Klitschko camp can get up to sneak a psychological advantage.

They like to present this statesmanlike, dignified image but actually pull all sorts of strokes to try and unsettle opponents. It was typical that they should slip a thick underlay of foam padding under the canvas in the hope of slowing Tyson down. It was the opposite of watering the pitch before a football match.

Luckily Tyson’s people were primed to spot this sort of thing as they did with the wrapping of Klitschko’s hands before any Fury representative was present.

The fact that the ring ruse and hand wrapping was rumbled probably got more to Klitschko as much as the punches thrown by Fury.

Fortunately Tyson stood his ground and pointed out that with that spongy underlay it would be like walking on a beach. Instead he has ended up walking on air.