UMAR SADIQ – ‘I TOOK THE LEAP’ 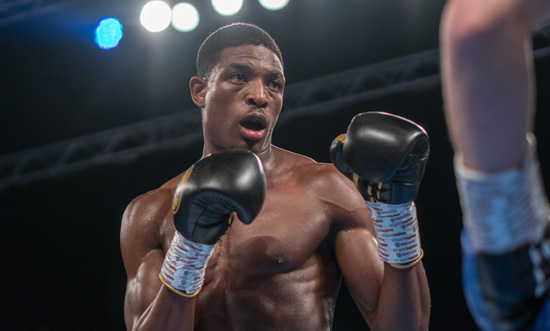 Ilford boxer Umar Sadiq will be stepping into the ring at The SSE Arena, Wembley on April 27th for fight number six of his professional career- but he could easily have stuck with counting numbers on a computer screen instead of lacing up the gloves if he hadn’t made a necessary sacrifice.

A short time ago, Umar’s full-time job was working as an accountant after graduating in accountancy at London Metropolitan University.

“It was the first time I had an office job and I kept it for a year and a half which I’m quite proud of actually!” joked Sadiq when speaking to TalkSPORT.

He continued; “But, I love boxing so much that I decided to pack in the day job to focus on doing what I really love, and now I live a blessed life doing what I love day by day.”

The decision to sacrifice financial security for chasing a dream would be a leap too far for many, and Umar admitted there were obstacles which needed to be overcome.

“I had a lot of people around me including my mum and she told me “You’re mad! How you going to survive and make money?!”– and I actually didn’t know! I just felt it in my gut that this is what I wanted to do.

“When everyone around you is doubting you, including family, and more importantly, people whose opinion you respect, you start questioning yourself.

“But if you want to do it enough and are brave enough, then ultimately at some point you will go ahead and do it. I see myself as a doer and I just thought ‘I’m just going to do it!’”

Umar goes into his six-round contest on April 27th coming off a stoppage victory against durable journeyman, Jevgenijs Andrejevs in early March.

The second-round demolition job on his Latvian opponent came after taking a first loss in his pro career against Fulham-fighter, Zak Chelli – who is also on the bill at The SSE Arena, Wembley.

Now back to winning ways, Sadiq will continue on his path towards what he set out to achieve in the sport and hopefully inspire other people in the same shoes as his own in the process.

“I’d like to be an example to others who wish to take the leap and tell them ‘look, I took the leap and I’ve done well, so maybe you can to.’”