WILLIAMS AND PATTERSON MEET FACE-TO-FACE FOR THE FIRST TIME 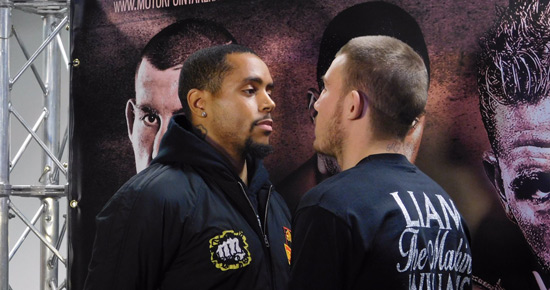 Undefeated British Super-Welterweight Champion Liam Williams (15-0-1, 10 KOs) came face-to-face with unbeaten challenger Ahmet Patterson (17-0, 13 KOs) for the first time at today’s press conference in Cardiff ahead of their mouth-watering clash at the Motorpoint Arena next Saturday, live and exclusive on BoxNation.

Williams currently sits at number three in the WBO World rankings, with Patterson ranked slightly lower in 14th place. The winner of next week’s showdown could potentially move into the mandatory position for Canelo’s WBO crown. Mexico’s Alvarez may choose to vacate his title in the pursuit of another at a different weight – should he do so, Williams or Patterson may find themselves fighting for the vacated crown in the not too distant future. A match-up with fellow Frank Warren stable mate Liam Smith could also be on the cards for the winner of Williams v Patterson.

Clydach Vale powerhouse Williams is enjoying an unforgettable 2016 after picking up the prestigious Boxing Writers’ Best Young Boxer of the Year award and defeating bitter rival Gary Corcoran on a memorable night back in July. Known by many as simply ‘The Machine’, Williams knows if he overcomes his latest challenger a World title shot could be just around the corner.

“Ahmet has got everything to be honest,” said Williams. “He can go back and forward really well, he’s a good puncher and a good mover. I’m expecting a very tough fight but I have prepared very well for Ahmet and will come in at 100% next Saturday.

“I rate Ahmet very highly, he’s a very good boxer but just like him, I am very confident and expect to win. It’s been a great year for me and I want to sign off with another memorable win in Cardiff. There’s going to be a lot of excited Welshmen in the arena and they’ll be in full voice.

“I was disappointed with my last performance against Gary Corcoran but I ticked boxes. There are more positives to take from it. It means a lot to me to be fighting at a venue that saw some memorable fights with Joe Calzaghe and Enzo Maccarinelli, it’s a special place.

“I have a high ranking with the WBO and there are some potentially huge fights coming up in 2017 for me. I have a job to do next week and I’m fully focused on that.”

Dulwich dancer Ahmet Patterson promised to outbox Williams in the Dragons’ den next Saturday. The Martin Bowers prodigy completely outclassed Ryan Aston last time out at York Hall back in January to pick up the IBF International belt and is confident of securing his second title of the year in the famous Lonsdale belt.

“This is a platform to set things up for massive future fights and opportunities. Liam is a British champion and I have a lot of respect for him. He’s got himself into a strong position and it will be an interesting fight next Saturday. I respect him as a fighter but this is business and I believe in my abilities.

“I don’t really believe in the game plan thing. A true champion adapts to what’s in front of him and I’ll be prepared for whatever Liam comes at me with. I don’t feel under any pressure fighting in Wales. It’s a ring, it doesn’t matter what happens outside of it. I feed off it.”