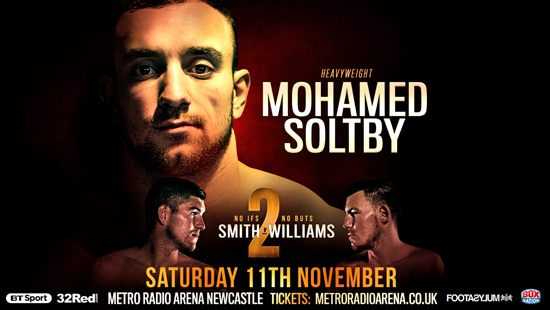 Soltby (13-0, 8 KOs) will fight over eight rounds in his second contest in the UK after he demolished Hungarian Ferenc Zsalek in one round at the Bowlers Exhibition Centre in Manchester earlier this year.

Trained by the legendary former WBO Lightweight World Champion Artur Grigorian, Soltby is hoping to fire himself into Heavyweight title contention with another explosive performance in Newcastle.

“I see a lot of fighters in the UK who are making waves in the heavyweight division,” said Soltby. “I know I have what it takes to beat them. I would love to fight the winner of Gorman v Webb, and have one eye on Agit Yabayel, who fights has-been Chisora for the European title.

“Adameck, Wach and Helenius are fights I want in 2018 and I can’t wait to show the UK public what I am made of in Newcastle on 11th November. I’m in a hurry to get a belt around my waist and a World ranking, I know I can mix it with the best in the division.”

Explosive Super-Middleweight Mark Heffron (Oldham, 16-0) another of Ricky Hatton’s excellent young stable of fighters, will also be in action on the card; undefeated Jeff Saunders (11-0) of Sedgefield takes on undefeated Liverpudlian Steven Lewis (14-0)