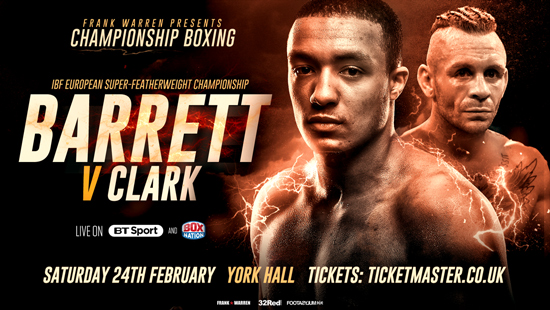 After barely putting a boot wrong during a 19 fight apprenticeship in the northern halls, Manchester sensation Zelfa Barrett – arguably the nation’s brightest prospect at any weight – intends to dispense some capital punishment upon Dundee hard case Ronnie Clark when he makes his London debut at the York Hall this Saturday.

‘I’m excited, man. A lot of southern fans have been messaging me, saying they can’t wait to see me,’ says the 24 year old who has won 19 straight with a dozen – often spectacular – stoppages.

‘Other than to sign with Frank (Warren, his Hall of Fame promoter) and attend the last James DeGale fight, I’ve not really spent time in London but this isn’t no game, no sightseeing trip. I’m on a mission.

‘I intend to put on a show, highlight that boxings not just about fighting, it’s an art; hitting and not being hit. It’s very hard to do and only the very best fighters consistently manage it.’

While the super slick yet potent 5ft 7in ‘Brown Flash’ has barely had his hair ruffled between the ropes, he copped hellacious flack on the social media outlets last year when his trainer, mentor and uncle Pat Barrett – a disturbingly dangerous former British and European light-welter champion – withdrew Zelfa from a sanctioned British title eliminator with Sam Bowen – citing his undergraduate ring education remained unfinished.

Such shackles have since been shed and the time has come for Barrett to be unleashed upon all comers in the talent dense 130lb division.

‘In 2018 I’m looking to win and defend the titles but there’s still no rush. We’re definitely here for the long run, not the short stay,’ clarifies ‘Zelly’ who has been masterfully managed by Steve Wood.

‘Let the others do the sledging. I prefer listening. I do my talking in the ring. Your Sam Bowens and Lyon Woodstocks are good, durable fighters but I believe I beat them.

‘Everyone can be fit and strong but, at top level, skills pay the bills and that’s where I excel. There’ll obviously have their opinions but I believe I’ve got the gift. Rather than call out names, I just say I’ll fight anyone who has the titles.’

In an end of year BoxNation poll, six of the dozen experts canvassed nominated the Harpurhey hotshot as the nation’s brightest starlet. However, the ‘Flash’ insists hard work supersedes innate talent as the key ingredient behind his rise to prominence.

‘What motivates me is the thought of getting beat,’ confides Barrett who has been known to train on Christmas Day!

‘I gain confidence knowing that I’m training, improving, when others aren’t. Defeat always felt horrible in the amateurs whereas winning is a feeling you can’t buy. I get a buzz when I see the things I work on it training, pay off on fight night.

‘I intend to be the next ‘big thing’ to come out the city. I’m doing this for all the people of Manchester. I still get up at 5am to run and I think people appreciate my realness. You can’t lie in boxing.

‘Already there’s no other fighter like me in the city and very few in the whole country. I’m mastering that US style….don’t blink or I’ll knock you out!

‘‘Uncle Pat’ genuinely wants what’s best for me. If he can coach me to achieve more than he did, be better than him, he’d be very proud.

Barrett’s burgeoning rep will certainly soar further if he can make short shift of the obscenely intense Clark, a battle hardened former British title challenger who takes great pride in getting into opponent’s faces and ruffling a few feathers. Zelfa welcomes the challenge.

‘I know I don’t look a rough, rugged guy. I’ve usually got a smile on my face and I’d rather showcase my skills but if it comes to the nitty gritty, I know I can fight,’  he warns.

‘I’m coming to light up London! I intend to show the cockneys I can deal with whatever challenges are put in front of me, then treat them to another spectacular knockout….add to the Barrett family highlight reel!’

Knockout artist Daniel ‘Dynamite’ Dubois (6-0, 6 KO’s) fights at the historical East London venue for the first time in his professional career as he defends his Southern Area Heavyweight belt against Queensborough’s DL Jones (8-0-1);

A very limited number of remaining tickets are available to purchase on the door.