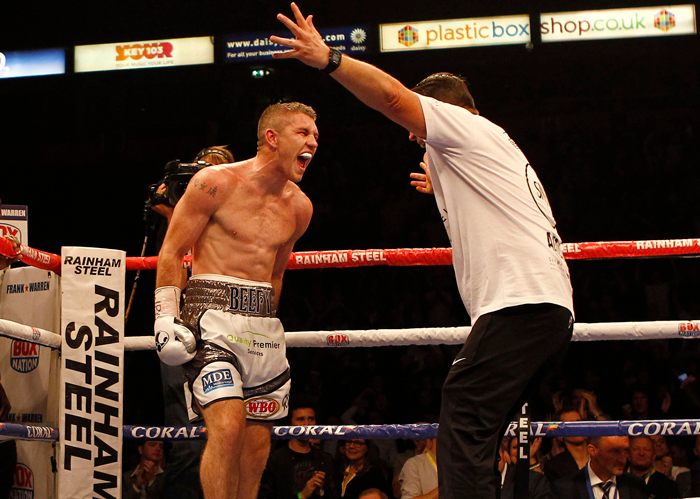 THE PROSPECT OF becoming a two-time world champion is looming for our own Liam Smith when he steps into the ring at the Hard Rock Hotel and Casino in Las Vegas in the early hours of Sunday morning.

Of course, frustratingly, Liam could have already held the distinction had illness not prevented him fulfilling a challenge to Sadam Ali back in May. Ali pressed on with the scheduled date and ended up coming unstuck against the new kid on the block, Jaime Munguia, a 21-year-old Mexican with a record that suggests he carries a bit of clout.

So Liam now faces the new champion and the bookies appear to strongly favour Munguia, whose professional career record reads 29-0 with 25 via KO.

Liam might be up against it but, even at the age of 29, you would describe him as a real campaigner. He is someone who has been there, done it, been a world champion and knows what it is all about.

Liam is really up for it and it is one of those fights that you believe will be a thrilling watch for the fans.

But if Liam is up against it, then so is Munguia, who hasn’t been in with anyone close to the calibre of Beefy. Ali made a name for himself by beating Miguel Cotto, but he is not a natural light-middle and was overwhelmed by Munguia in May.

Liam certainly is a natural at the weight and, as he showed against Liam Williams in their first fight, he has got it in him to overcome genuine adversity and find a way to win.

From reading reports, Munguia seems to think he will be able to take Liam out early. As far as I’m concerned, that is a good thing because if he is looking for an early night it means he is coming to fight and throw punches, which means he will leave himself open.

This is where Liam’s experience and knowhow will come into play.

It is a fight I am looking forward to and I recommend you setting your alarms for 3am on Sunday morning to view the action live and exclusive on BT Sport 1.

I WOULD LIKE to take this opportunity to send my personal condolences to the family and friends of the former chief executive of Sky, Sam Chisholm, who passed away last week at the age of 78.

The sometimes formidable New Zealander was a trailblazer in this country in the field of subscription television and it was his foresight and vision that prepared the ground for Sky being in the healthy position it is today.

At the time of his appointment in 1990, make no mistake, Sky were desperately struggling to keep afloat and were losing £2m a week due to poor investments in programming.

Sam was ahead of his time and identified the huge growth potential in sport, particularly football, and Sky proceeded to outbid ITV for the rights to live matches from the newly formed Premier League.

The rest, as they say, is history.

My own association with Sam came about when I left ITV to link up with Sky in what was the biggest deal in boxing at the time – something like £25m, which was huge money back then.

Together we set about changing the whole landscape of boxing during his tenure with the broadcast of major fights on satellite television, as well as the introduction of the pay-per-view market in this country.

Sam was always a hugely innovative character and it was he who led the floatation of the company in 1994. Those who retain shares from back then might like to raise a glass to Sam when you consider it is now valued at some £25bn in the light of takeover interest.

I certainly raise my glass to a genuine driving force of the television industry who did great things for the sport of boxing.

WORD SEEMS TO have got out that Terry Flanagan is the latest entry into the World Boxing Super Series in the super lightweight category.

Terry, of course, has only had one fight at the weight with his ultimately unsuccessful challenge for the then vacant WBO world title against Maurice Hooker, which he was deemed to have lost via a split decision.

He now has the opportunity to put himself right back in the fold against the champions and leading contenders of a division that became wide open following the decision of Terence Crawford to switch to welterweight.

It is the quickest route back for Terry, who is someone we have continually banged the drum for over the last few years. A successful series could make all the difference for him going forward and, fingers crossed, it does the trick.