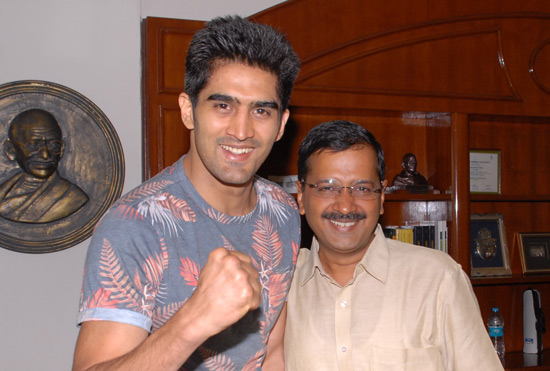 After meeting Vijender Singh said “It was an honour for me to meet Delhi Chief Minister Mr. Arvind Kejriwal and I personally invited him to my title fight scheduled to be held in the capital on 11th June. We discussed the scope of professional boxing in India and he assured me of his help and support for which I am very grateful. I look forward for Mr. Kejriwal to come and watch me live in the Capital on 11 June. I am happy to know that Mr. Kejriwal is following my professional fights”.

Vijender’s next fight is scheduled for Copper Box Arena in London on 30th April 2016 and the boxer will leave for Manchester to resume his further training early next week. Vijender, who took his record to 4-0 in Liverpool last month will now fight in an eight-round contest against an opponent to be announced next week.