India’s boxing superstar Vijender Singh is excited to fight in the city of his heroes for the first time on Saturday 13th February.

Undefeated middleweight Singh, who has won all his three fights by knockout inside three rounds, has his first fight of the year at the Liverpool Echo Arena and is looking to putting on another explosive performance at the birthplace of his idols – The Beatles. 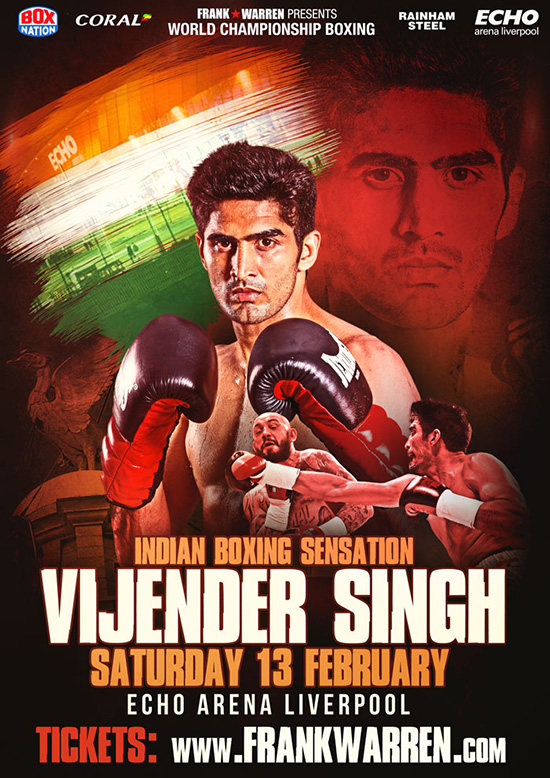 Whilst boxers usually look to the sport’s legends like Muhammad Ali and Sugar Ray Leonard or greats like Floyd Mayweather and Oscar De La Hoya for inspiration, the 30-year-old from Bhiwani, Haryana, says John, Paul, Ringo and George are his icons.

And while Singh is priming himself for action at the Echo Arena, his first port of call in the city will be the legendary Cavern Club on Mathews Street.

“When I turned professional in England I hoped that I would one day fight in Liverpool and fight at the birthplace of my heroes, now that dream will come true on February 13,” Said Singh.

“I love the Beatles music since I was a child back home and my parents are big fans of their music and I believe that my grandparents went to see them when they came to India in the late 1960s so growing up I remember all the hits Hey Jude, Yesterday, All You Need Is Love, Let It Be, Penny Lane, Here Comes The Sun, I love it all!”

“I can’t wait to get to Liverpool, I’ve never fought in the city before as an amateur so now I will get my chance to get down to the Cavern Club finally.  Madison Square Garden may be the home of boxing, but for me I have to get to the Cavern Club!”

“I admired boxing legends like Ali and Sugar Ray growing up, but they were never really my heroes, The Beatles however were the centre of my life growing up, I wanted to be a rock star! We’ll I’m rocking opponents in the ring now!”

Hotshot Singh aims to kick off his 2016 campaign in knockout style when he fights over six rounds in an international contest against an opponent to be announced and the 2008 Olympic Bronze Medallist is excited for the year ahead.

He added, “I ended the year in great style and now I’m looking to begin it in the same fashion by knocking out whoever is put in front of me.  This is an important year for me to continue developing and getting in more ring experience, but I’m looking to bring the excitement as well.”