On Saturday Vijender Singh will step out at the Manchester Arena for his professional debut as part of the supporting cast to the star turns at the World title double-header featuring Terry Flanagan and Liam Smith.

Playing second fiddle is not exactly familiar territory to the 29-year-old from northern India – even his Bollywood debut in the drama film Fugly saw him awarded a leading role. Vijender is not your average novice pro. 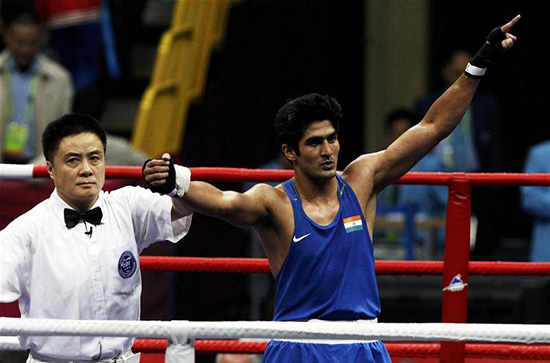 Both the Rajiv Gandhi Khel Ratna award – India’s highest sporting honour – and the Padma Shri – the fourth highest civilian gong – have been bestowed on the nation’s favourite fighter and only boxing Olympic medalist. Vijender won bronze at the 2008 Games in Beijing, where a certain Badou Jack was overwhelmed by a margin of 13-2 in the round of 32.

Even outside of boxing he is used to to bossing it, with his official profession at home being the long arm of the law.

After achieving stellar status on the subcontinent with an amateur career that also yielded two Commonwealth Games silver medals in 2006 and 2014, bronze at the 2006 Asian Games, 2009 World Amateur championships and 2010 Commonwealths, with a gold coming at the 2010 Asian Games. Vijender was rated as the No.1 middleweight in the unpaid ranks in 2009.

His standing in his home country is probably only usurped by the other sporting stars who fend off leather at high speed – the likes of Tendulkar and co, who will always dominate the hearts and minds of a cricket-mad nation. But with nearly 1.3 million ‘likes’ on his Facebook page, Vijender is hardly short of admirers as an individual sportsman.

How highly he is regarded by the Indian media was none-too subtly illustrated by the Indian Express outlet last week when Sonny Whiting was named as Vijender’s first professional opponent. ‘Scaffolder v Superstar’ was the provocative heading for the latest news bulletin on his transfer to Manchester, where he is being schooled in the professional art by leading trainer Lee Beard.

It did not come as a surprise to learn that news of our Indian takeaway was not enthusiastically received by all concerned when Vijender announced he was switching codes as well as countries at the end of June.

“It was mostly good from people who understand sport and know me and what I’m doing,” he explained. “They don’t all know about pro boxing so you get some bad comments, but there has been a good reaction. My family, my friends and my boxing coaches are all supporting me.”

A fair degree of the dissatisfaction with his decision most likely stems from the fact that he will not be flying the flag of his country at a fourth Olympics in Rio next year or future Commonwealth Games, where previously he has encountered names he could potentially become familiar with again.

In 2010 he defeated Frank Buglioni, before a controversial decision saw Anthony Ogogo emerge victorious after the home fighter was twice deducted two points in the final round after building up a 3-0 lead.

“Yes, that is the only thing,” said Vijender on extinguishing his own Olympic flame. “I have already fought at three Olympics. There were some permissions that I needed, as a policeman, before I was able to come into professional boxing. The media put some negative stories in the paper, but people who understand sport kept everything very positive.

“People don’t always want to see someone who belongs to a small town or small village go to England to take up pro boxing. Some people are happy, some people are maybe jealous.”

With his October 10 date in the diary, trainer Beard has been harnessing the undoubted amateur qualities of his new pupil with the aim of creating a champion-in-waiting. Lesson one appears to be the need for patience.

“It’s different, I can say that, everything is different. Pro boxing is hard work needing lots of calm, lots of patience. I am learning every day working with Lee and the team.

“Before everything was very fast, but now I need to learn the calm and patience to wait for the right moment. 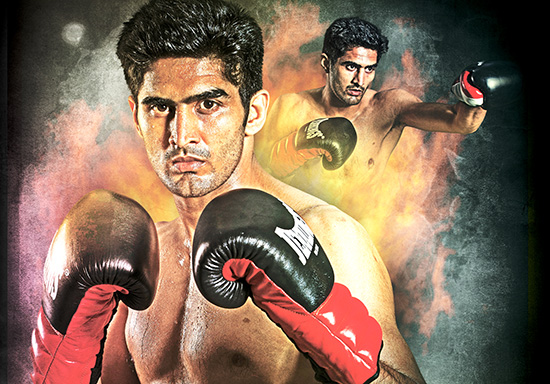 “It is all in the fights now, I know how to fight. I have done so much sparring in the last month and I am ready now,” added Vijender, who hopes to tap into Manchester’s Asian population for some early local support.

“There is a big Asian community so hopefully they will support me and come to see my fights. I am positive they will come, 100 per cent, because they have been messaging me on Twitter and Facebook saying that they are coming.”

With his Bollywood debut already in the bank – and a few more offers on the table, he revealed – Vijender does not rule out a grand movie-style ring entry if he makes it to title level.

“Yeah of course man, why not? I could go with the Bollywood thing of glamour and dance before enjoying the fight.

“I have only done one film at the moment, but I have two or three other offers. Right now though I just want to focus on pro boxing.”

With the climate at home currently souring, Vijender appears pretty content with his new life as a Singh in the Manchester rain. He is adapting and embracing local culture and, while the number of Indian restaurants has not gone unnoticed, he insisted he is sticking to his high-protein fight diet for now and soon intends to sample Manchester’s passion for football.

“It is very nice, I can say that, because India is very hot at 42 degrees sometimes and it is very peaceful in Manchester and I love it. It’s not a big town and I have been everywhere.

“It is raining sometimes, but it is nice weather for me.”

Diplomatically – and perhaps sensibly – Vijender avoids revealing which team in the city he is planning to adopt during his stay.

“I haven’t been yet, but we are planning to go and I am still waiting for the chance. I love football, I won’t choose a club because I just love football. Let’s see how it goes.”

The only match that really matters for him in Manchester is his own against Sonny Whiting on Saturday where, in his first outing, the punching policeman would probably settle for nicking a win.