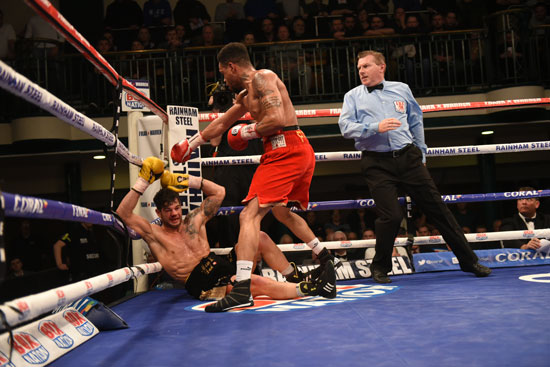 Both fighters looked in impressive condition and an equal match for one another in a cagey opening first round. Patterson landed a heavy right hook on Aston which clearly hurt him, the Dudley man retreated before gaining his composure. Patterson didn’t want to be drawn into a brawl and used his jab well throughout the first.

Aston was looking to make up for a poor first round and looked to land a big shot of his own. Ahmet sensed danger and threw his jabs from a safe distance. The contest began to heat up in the latter stages of the second round with both fighters missing some big shots.

Classy Patterson caught the Aston with another big right-hand at the beginning of the third round which was taken well. Aston replied with his own big right-hand and continued to press forward, neither fighter wanted to take a step back.

“Punch Picker” had his opponent up against the ropes in the fourth after landing a powerful headshot. Aston looked to be in trouble once more but came back into the fight again much to the delight of his travelling support.

Patterson began to take hold of the fight in the fifth round, demonstrating his punching power and he finally got his knock down, dropping Aston with a clinical right hook.

He could sense a win and came out looking for another knock down in the sixth round. The bloodied Aston bravely fought on looking to get back into the fight. Aston was floored for a second time and stayed down before rising to his feet once more. A three punch combination dropped Aston for a final time in the neutral corner and the referee had seen enough.

“I’ll fight anyone, I’ve shown everybody tonight what I’m all about. I know I’ve got what it takes to beat the best and I’m certain that I’ll be claiming my own world title some day.” Said Patterson afterwards.

Ryan Walsh made a stunning first defence of his British Featherweight title with a brutal fifth round KO against Aberdeen’s Darren Traynor at Bethnal Green’s York Hall. 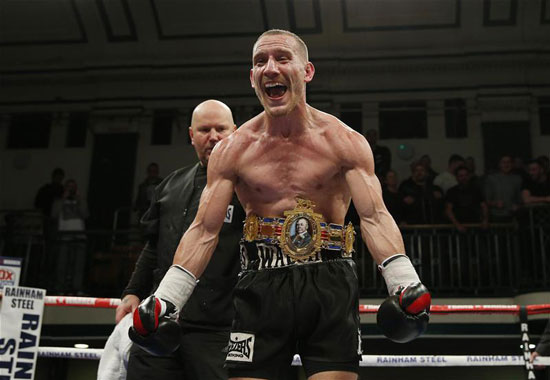 Roared on by hundreds of his loyal Farmy Army supporters, Walsh put on a stunning performance in the opening defence of the title he won against Samir Mouneimne last September.

Both fighters set a fast pace in the opening first round with no feeling each other out, both went straight into each other with relentless punches being thrown.

Walsh’s legs wobbled in the second from an over-hand right but the Norwich man laughed it off as he quickly regained composure. Both men were at each other’s throats throughout the second round with powerful jabs being landed.

The Cromer man began to take control in the third, inflicting a nasty cut on the right eye of the Scotsman. With blood streaming down his opponents face, Walsh upped the pace towards the end of the round, landing some good combinations.

The contest was settled in the fifth round with a sharp right hand followed by three left hooks, and then a dynamite right hand to send Traynor through the ropes with the referee waving it off at the count of 8 to send Walsh’s fans into a frenzy.

“It’s amazing to start the year off with a big win and a big performance. Darren was a tough opponent and put up a good fight for the first few rounds until my accuracy and power came through and I found myself landing at will and I knew then it was only a matter of time before I nailed him,” Said Walsh.

“In the fifth round I could see that I was hurting him and then I landed a beautiful combination starting with the right hand and three left hooks and a final right hand to send him crashing through the ropes and I knew he wasn’t going to be getting up, thankfully the ref called it off,”

“I’d like to thank my loyal fans for turning out as they always do to support me and I give them what they want; excitement. My dream is to win this beautiful Lonsdale Belt outright and tonight was the first of three defences, I cant wait for the next one.”