British hot shot Liam Walsh destroyed Brazilian puncher Isisas Santos Sampaio in six rounds to claim the Vacant WBO Intercontinental title at the Manchester Velodrome tonight with a devastating body shot.
The Cromer star was frustrated early on with Sampaio’s negative tactics, but he switched from orthodox to southpaw in the fourth round and started to find more success with his punches.
In the sixth round he landed a long left to Sampaio’s head and then with the same hand delivered a crunching body shot that left Sampaio rolling around on the canvas in agony unable to make the ten-count.
Walsh’s win sees him capture a fifth championship title and will now enter the WBO top ten rankings as he closes in a world title shot and Terry Flanagan could be a potential opponent if he beats Jose Zepeda in their WBO World title clash. 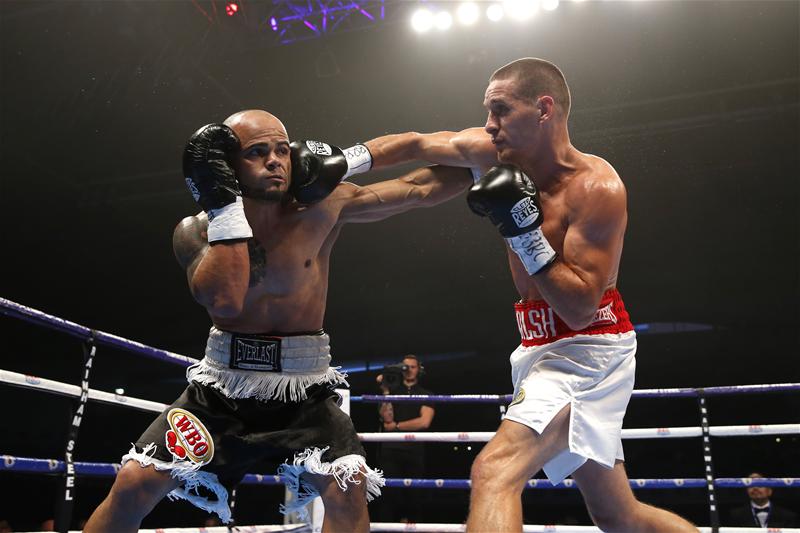 “Sampaio was a tough nut to crack, he wasn’t like I’d seen on video footage, from what I saw he was more aggressive and attacking, I was looking forward to seeing that tonight but he didn’t show it,” Said Walsh.
“It was frustrating because up until the fourth round I wasn’t at my best and then I switched to southpaw and I started landing more, that’s the thing I can adjust and change plans to overcome my opponent,”
“Although it wasn’t my best performance, it was one of my best finishes and I’m really happy with the ending, it was a beautiful shot and I knew that he wasn’t going to get up from that one,”
“I’ll sit down with my team and evaluate where we go next because I’ve got options at super-featherweight and lightweight.  If Terry Flanagan beats Jose Zepeda then that’s a cracking fight between two undefeated British fighters if he fights me, but we’ll see what happens.”