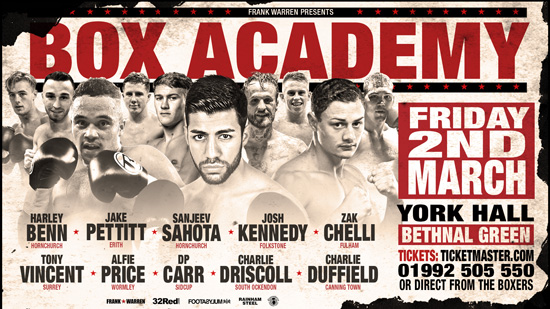 Some of Frank Warren’s brightest young stars are in action at Bethnal Green’s iconic York Hall on Friday 2nd March as part of his stacked Box Academy show.

All-action Hornchurch Welterweight Sanjeev Sahota (10-0, 3 KO’s) has enjoyed a rapid rise since turning over in early 2016 and continues to work towards his first professional title. Negotiations for ‘SSS’ to take part in his first title bout on the March 2 card are ongoing.

Undefeated English Super-Bantamweight Champion Josh ‘Handsome’ Kennedy (10-0, 5 KO’s) promises to start the year in style as he targets a shot at the British title currently held by Thomas Patrick Ward later in the year.

Fulham Super-Middleweight talent Zak Chelli (3-0, 2 KO’s) returns to the atmospheric hall for the first time since his pro debut win against Trowbridge’s Jacob Lucas in February 2017.

Tickets for Box Academy priced at £40, £50, £60 and £80 are available to purchase from www.ticketmaster.com and directly from fighters on the bill.

Media accreditation: Media and photographers wishing to attend the March 2 show can apply via the event page on the Frank Warren website.