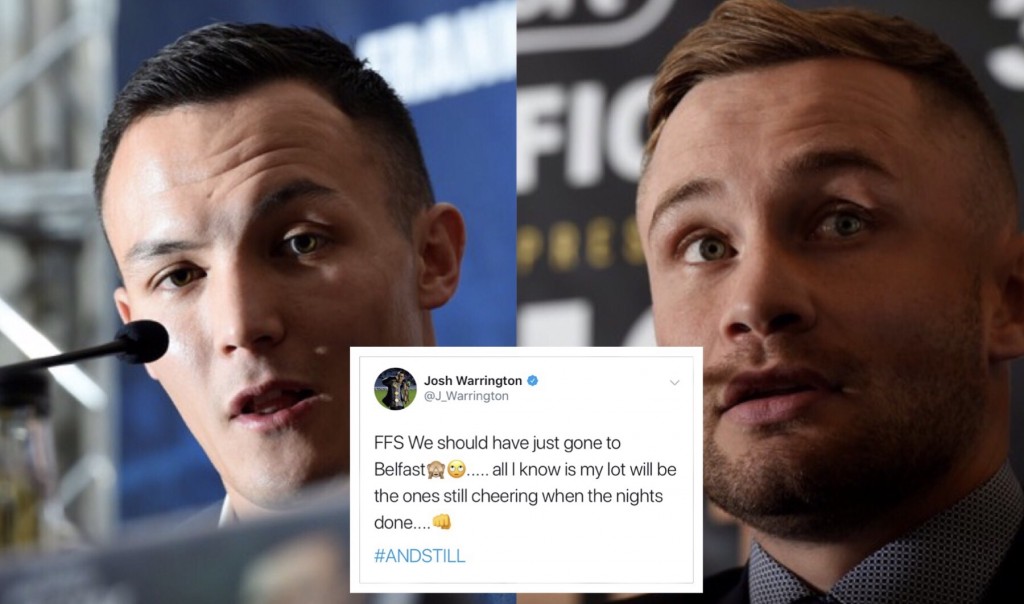 JOSH WARRINGTON AND CARL FRAMPTON were involved in a bit of social media back and forth earlier this week. Warrington reacted with a degree of dismay to the news that Carl Frampton will be accompanied by – at current count – three of his countrymen on the massive Manchester Arena show, headlined by the IBF world featherweight title blockbuster.

News broke this week revealing that former amateur superstar and now blue chip featherweight prospect Michael Conlan will head to Manchester for his tenth professional fight, having clocked up win No.9 with a seventh round stoppage of Nicola Cipolletta in Las Vegas last weekend.

Also on the card is another Irish Olympian, Paddy Barnes, who is bidding to get back on the world title track after coming up short against Cristofer Rosales for the WBC world flyweight title on the huge Windsor Park bill in August.

Then there is Frampton stablemate Steven Ward, The Quiet Man, who will be entering into his tenth fight at light heavyweight, having beaten Steve Collins jr at Windsor Park in his biggest win to date.

So, as the tweet from the Frank Warren account rightly pointed out, Belfast will very well represented in Manchester on a show that will be broadcast live on BT Sport Box Office and on ESPN+ in the United States.

This drew a cutting remark from the IBF world champion, who made the sarky suggestion that he might as well have just signed up for an away fixture. He added that his cast of thousands that will be making the trip over from Leeds will be the ones having the last laugh at the 21,000-seater arena.

“FFS We should have just gone to Belfast….. all I know is my lot will be the ones still cheering when the nights done…. #ANDSTILL” responded Josh to the increasing of the Belfast contingent.

FFS We should have just gone to Belfast….. all I know is my lot will be the ones still cheering when the nights done….#ANDSTILL https://t.co/w4ZF7IPlWI

Never short of a swift counter, Carl predicted double despair for the Leeds masses on December 22, a day when the city’s football team head to the midlands to take on Aston Villa in the afternoon. “Beat by Villa that day and you losing your title. Doubt they’ll be singing,” jabbed back the Jackal.

beat by Villa that day and you losing your title. Doubt they’ll be singing https://t.co/6BXtboqJhT

Warrington, who having started this particular exchange, landed the final blow this time, as he threw back at Carl Frampton to signal the end of the round.

The Twit-for-tat has started, watch this space.