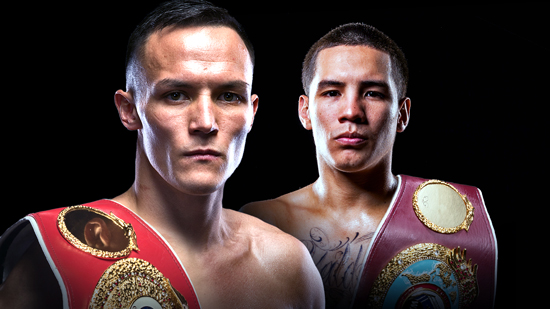 JOSH WARRINGTON is dreaming of hitting the boxing jackpot in Las Vegas so his friends can have a week of partying.

Promoter Frank Warren is lining up a unification fight next year against WBO champion Oscar Valdez for the winner.

If Warrington wins his first defence next month he wants it to take place in America. Warrington (27-0) is a huge ticket seller and would take thousands of fans if he boxed in the world’s boxing capital.

He said: “I would like to go to the United States – that gets me excited!

“It is for all my fans. After I beat Lee Selby, they were all asking me; ‘When is Las Vegas happening?’ They want an away day and an excuse to take a holiday..

“My boxing bucket list is unifying the division and to box there like a lot of the great fighters have.

“When I went to watch Carl fight Leo Santa Cruz in their Las Vegas rematch I made it my intention then that I wanted to fight there.”

Valdez says he wants the Warrington/Frampton winner and his promoter Bob Arum has discussed the clash with Warren, who promotes both boxers.

Warrington, 27, added: “Valdez is very exciting, a helluva talent, likes a scrap, known how to get guys out when they’re hurt but at the same time I have seen weaknesses.

“He gets caught pretty clean and sometimes uses his chin as his defence. He has beaten good names though and I wouldn’t take any credit away from him.

“Right now all I’m thinking of is Carl, and I’m sure he is thinking of me more than Valdez or any boxer.”

Warrington is still young enough to take his time in cleaning up the Featherweight division, but is in a rush to secure his legacy.

“When there is a chance to fight another champion you are going to grab that opportunity with both hands,” he explained.

“I am reaching my peak years. I’m fresh, I’m hungry, I’m determined. When you have momentum and confidence in yourself go for the big ones.

“Some fighters look at it like they have a chance to pad out their record and get some paydays under their belt.

“It is a short career and I don’t want to be boxing forever. If I can get the big fights one after the other I will take them.

“In my mid-career I was headlining Leeds Arena and I wasn’t fighting big names, but I was building myself up.

“Now it is the time to get big fights and all I want to do is be involved in them.”