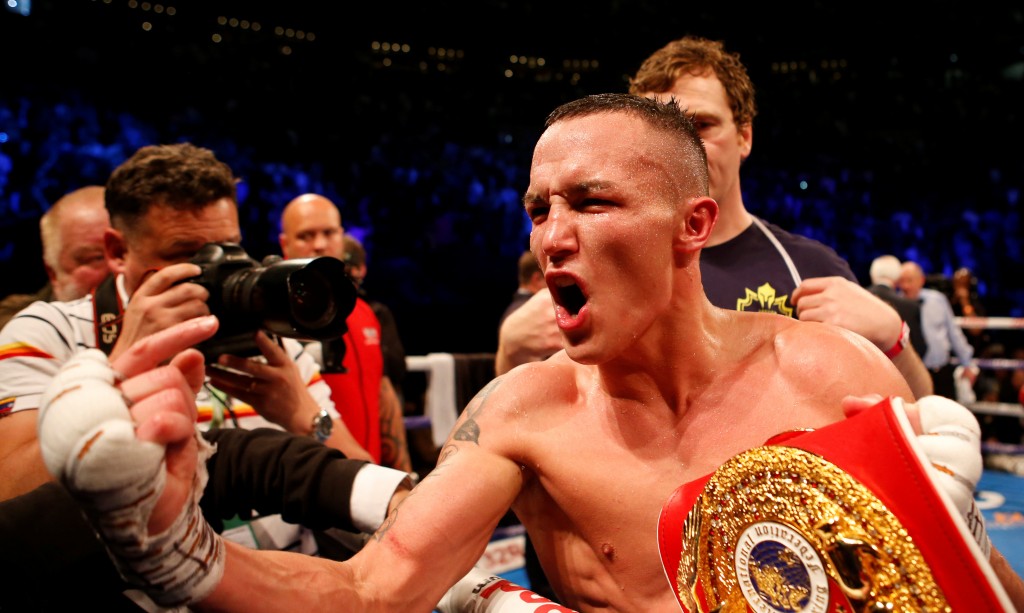 JOSH WARRINGTON RETAINED his IBF world featherweight title in his second defence at the FD Arena in Leeds on Saturday night with a split decision points win over mandatory challenger Kid Galahad.

The Yorkshire derby clash was one of three title fights to be staged on the card and below is a brief rundown of how the night played out.

THE IBF WORLD FEATHERWEIGHT CHAMPIONSHIP
12 x 3
Josh Warrington W pts (113-115 116-112 116-113) Kid Galahad
To write a blow-by-blow account of this world title fight wouldn’t be an extensive read because, for many of the rounds, probably a single shot by either man swayed the judges. It was a hard watch and Galahad was warned over holding, but continued to employed the tactic and the fight was dulled as a spectacle. World champion Warrington was the aggressor, but failed to extricate himself from the tangle of Galahad’s web. From ringside you got the impression that short bursts of work was winning rounds for Warrington, but Galahad did warm to his task as the fight reached the later stages. Warrington rallied and upped his work in the championship rounds and prevailed in a fight that was very hard to score. The end result is the Leeds man retained his title in his second defence in an amazing atmosphere on his home patch. Unifications now beckon for a fine and still unbeaten world champion.

THE VACANT COMMONWEALTH SUPER FEATHERWEIGHT CHAMPIONSHIP
12 X 3
Zelfa Barrett W pts (118-110 117-111 117-111) Lyon Woodstock
The Manchester man was the busier and sharper right from the off as his movement and snappy jabs presented a problem that Woodstock would struggle to find a solution to throughout the fight. The Leicester fighter did find his range in the second but the sharper work always came back from the now 20-1 Barrett. The fight followed a similar pattern across the 12 rounds, with Woodstock needing to close the distance and Barrett remaining elusive, although a thumb in the eye did provide some discomfort. Woodstock continued to stalk as the final bell neared, but it was hard to make a case for him on the cards and Barrett has now added the Commonwealth to his English title.

THE VACANT COMMONWEALTH SUPER WELTERWEIGHT CHAMPIONSHIP
12 X 3
JJ Metcalf W RSC 2.25 R8 Jason Welborn
The jab of the Liverpool man was established early in the fight to good effect, with only a single flurry from Welborn coming back in retaliation. The jab was, in fact, Metcalf’s pretty much sole weapon as he appeared reluctant to employ his right hand much at all, but so sharp was his left that he was able to pick off his opponent and gain authority in the fight. Welborn, unusually, was a little gun shy at times and appeared slightly vulnerable when Metcalf targeted the body. Metcalf had a point deducted for straying low in the eighth, but the rest was only a stay of execution for the Midlands man because a shot on target in the middle ended his night later in the round.

6 x 3 Middleweight
Shakiel Thompson W pts 59-55 Alastair Warren
The smooth operator Thompson, coming off a first round stoppage win at Wembley, was made to work considerably harder in Leeds against the redoubtable Warren, who always makes a fight of it. The skilful and rangy Sheffield man took his time and it wasn’t until the sixth round that Warren was forced to absorb some heavy punishment.

4 x 3 Middleweight
John Joyce W pts 59-56 Victor Edagba
Outstanding Irish amateur John Joyce made his debut on the card and appeared determined to make a statement to announce his arrival in the pro ranks. His London opponent wouldn’t allow himself to be bullied and made a fight of it, but Joyce’s work rate and aggression was always going to win the night.

8 x 3 International super bantamweight
Jack Bateson W pts 80-71 Bayardo Ramos
A fantastic combination from the popular Leeds man floored Ramos in the first round before the Nicaraguan was floundering on the ropes moments later. Bateson went for the jugular, dispatching some vicious shots as he chased a stoppage, but his opponent went into stubborn mode and the rest of fight followed a similar pattern. Bateson had to be patient and settle for banking the rounds.
6 x 3 International middleweight
Mark Heffron W pts 60-54 Daniel Urbanski
The Oldham man recorded win number 22, but made hard work of seeing off the challenge of the brave Pole. It turned out that Heffron sustained a hand injury in the second round while stiffening the legs of the battle-hardened Urbanski on several occasions. The handicapped Heffron ultimately settled for peppering his opponent for six rounds and claimed a shut-out points win.

8 x 3  International light heavyweight
Lyndon Arthur W RSC 2.25 R1 Andrzej Soldra
The relaxed and loose style of Lyndon Arthur proved too much for his Polish opponent, with his flicking jabs and jolting rights instantly placing Soldra on the back foot. A poleaxing right sent Soldra’s senses into orbit, with the referee slow to notice he was out on his feet before applying a rightful stoppage.

8 x 3 Heavyweight
Alex Dickenson v Kamil Sokolowski W pts 77-76
Sokolowski scored an upset of sorts, which won’t have surprised many, with a narrow points win over the Formby fighter, who can probably consider himself unlucky not have been awarded the decision himself, or at least a draw. It was a nip and tuck affair with not much in it, but Dickenson appeared to start the sharper and produced the cleaner work in the first half. He did fade a little in the home straight, with Sokolowski able to land and was obviously industrious enough to edge the win.

8 x 3 International middleweight
Troy Williamson W RSC 1.07 R6 Edwin Palacios
The Trojan moved to 11-0-1 in an impressive fashion against the durable Palacios, who holds a winning record that now stands at 12-9-1. It was a dominant performance by the Darlington man, who deflated his opponent with a right to the body early on, followed by a looping left around the ear. The Spaniard was beaten up, but remained defiant in the face of constant pressure, before a right hand floored him for an eight count in the fifth. A left hook sent him south again and he livened up enough during the count to convince Howard Foster to allow him to continue, but a right-left combination in the sixth put an end to his night’s work.

6 x 3 Light heavyweight
Kody Davies W pts 60-53 Harry Matthews
Welsh talent Kody Davies made a winning start to his career as a Frank Warren fighter with a landslide points win over the game Harry Matthews, who refused to be bullied by the light heavyweight bulldozer, who is now 9-0 as a pro. While not getting close to winning the rounds, Matthews made a fight of it until his resistance ebbed away in the final third when Davies worked to the body and a left hook saw him hit the canvas in round six.

4 x 3 Super welterweight
Jack McGann W pts 40-36 Kevin McAuley
Liverpool’s Jack McGann moved to 3-0-1 with a convincing points victory over the always competitive Kevin McAuley in the opener for the night. McGann, who is also an MMA star, dictated the pace and his standout moment was a blistering left in the third round that jolted the chin of the 216 fight veteran. McGann used his jab with telling effect to record his third win, no doubt aware that a stoppage was not likely to be on the cards.