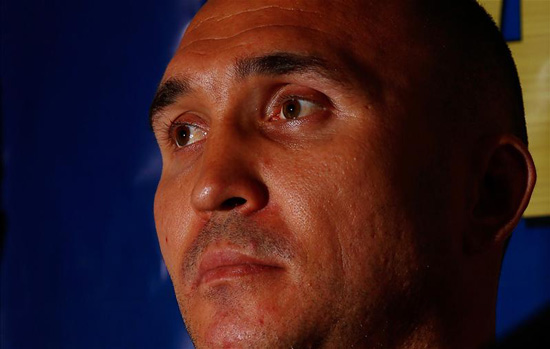 Ustinov’s opportunity has arrived after the WBA allowed Ortiz and Matias Vidondo to challenge for the Vacant title on October 17 in New York, which Ortiz won by third round stoppage.
The WBA stipulated that the winner must fight Bryan Jennings next, which Ortiz did and won by seventh round stoppage on December 19 in New York, and the winner was to face Ustinov within six months.
The promoters of Ustinov and Ortiz will be begin negotiations and if an agreement isn’t reached then the bout will go to purse bids with a 50/50 split.
Man mountain Ustinov, known as ‘Alexander The Great, born in Paustovo, Russia, but fights out of Minsk, Belarus, stands at 6′ 7½″ and has 24 knockouts from 33 wins, with only one loss, and is the two-time WBA International Champion.
Unbeaten Cuban KO king Ortiz, now fighting out Miami, Florida, has knocked out all but three of his 24 opponents, with 12 coming inside three rounds and has held the WBC FECARBOX, WBA Fedalatin, WBO and WBC Latino titles.