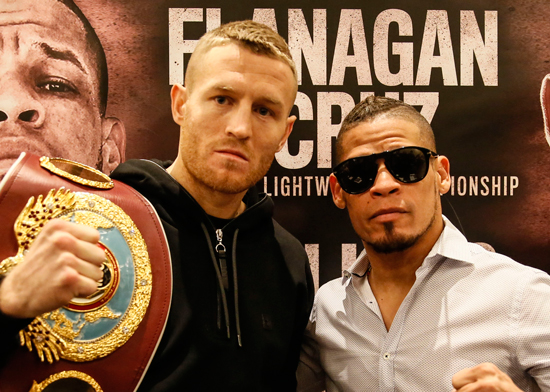 This Saturday at Cardiff’s Motorpoint Arena, WBO lightweight boss Terry Flanagan is promising to provide a refresher to anyone who doubts his standing as the planet’s premier 135lb prizefighter, writes Glynn Evans.

The 27 year old ‘Turbo’ from Ancoats, Manchester is acutely aware that he dipped beneath the lofty standards he sets himself when he plodded past veteran South African spoiler Mzonke Fana in a 12 round snoozer in the Welsh capital last summer.

But he intends to settle his debt to Welsh fight fans with interest this weekend.

‘I’ve been given a second chance to show Cardiff exactly what I’m about; an exciting southpaw, the best fighter on a good bill, the world’s best lightweight,’ says the 5ft 9 ½ in southpaw who makes a fourth defence of his belt against Puerto Rico’s Orlando Cruz, the world’s only openly ‘gay’ professional boxer.

‘Last time, I was sh** really. I make no excuses because it was probably the best camp I had – far better than when I destroyed Diego Magdaleno – and I made weight comfy. I really expected to put on a good performance but my head weren’t right. I was flat.

‘After the fight got put back, I just couldn’t get up for it. The atmosphere weren’t the best for my fight and, after 30 seconds, it was clear Fana had just come to survive. Then, I got cut through being daft.

‘Still, I completed 12 rounds at my pace and it was an easy night’s work. There was plenty to learn from and make sure in never happens again.’

Saturday’s defence represents the unbeaten Manc’s fifth world title fight in 16 months and victories over quality Yanks Jose Zepeda and Magdaleno (both second round stoppages) plus Scouse showman Derry Mathews (points) give credence to his claim to be considered the global leader at 9st 9lbs.

A demolition job over Cruz in Cardiff will pave the way for superfights at either 135 or 140 lbs in 2017.

‘Super-lightweight will probably suit me better,’ confides Flanagan who has won 31 straight with 12 stoppages (including six of his last eight).

‘I’ll carry my speed up plus I’ll be stronger and able to work that bit harder. But I’ll move up in weight when I choose to, not because I have to. It is getting harder but provided I eat clean and avoid ‘cheats’, it’s not an issue.

‘The names at 140 are no better than those at lightweight and I‘d definitely like to unify before I step up.  I’ve still got possible fights with Linares, Crolla and Felix Vardejo to take care of.

‘It’s heavily rumoured that Crolla and Linares will rematch in the new year. Me and Crolla in Manchester would be huge if he avenged Linares. But we’ve offered the fight to Anthony’s team before and I really don’t think they want it. His camp knows I’m all wrong for him, a superior boxer with a higher work rate. He’s made for me.

‘I’d prefer Linares any way.  He looked fragile when Crolla put it on him early doors and his corner seemed very worried. I think he’s ‘chinny’ and I’m confident I’d stop him if I hit him clean.

‘But if I can’t get that unification, I definitely intend to honour my mandatory against Verdajo early in the new year. I’ve heard he’s booked for St Patrick’s Day at Madison Square Garden and I’ll happily oblige him. He’s a decent technical boxer but I’ve a lot more to my game.’

The withdrawal of fellow world champ Billy Joe Saunders plus challenger Cruz’s highly publicised background story have combined to heighten the profile for a fight that might otherwise have slipped beneath the radar. Flanagan fully intends to capitalise.

‘Look, it was very brave of Orlando to come ‘out’ but I’m not interested in either his sexuality or his personal life. I’m only interested in him as a boxer; an opponent. He’s a good fighter but I’m going to deal with him,’ warns the ‘Turbo’.

‘I don’t look too much into his losses, I look at his wins, what he’s capable of at his best. He knocked out some kid who was 19-0 in the first round and he’s won his last five, three by stoppage. He’s got to be respected.

‘From what I’ve seen, he’s tricky and he can bang. Coming up in weight, he’ll be stronger than he’s even been before.

‘I do prefer to fight shorter lads who come on to me but Cruz has fought taller men his entire career. His got a wide stance, drops his hands, makes you miss with his head then attacks from low. He’s no mug.

‘I’ll need to keep it long, push him back, use my ‘step backs’, put it on him and ‘take him out’. Hopefully, it’ll be a great fight for the fans while it lasts.’