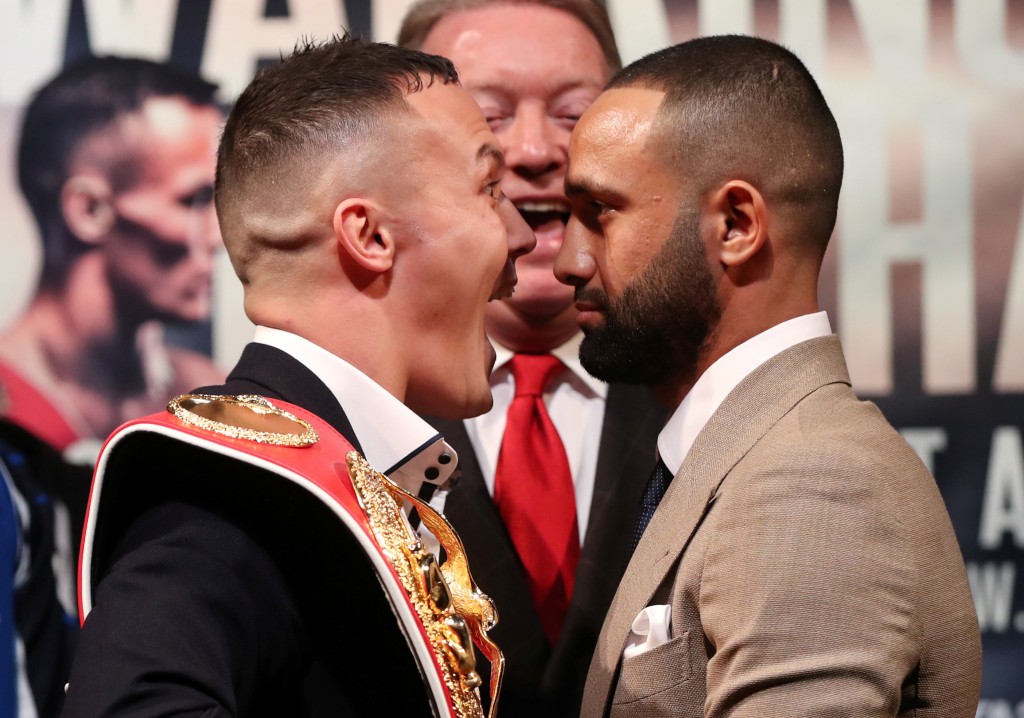 JOSH WARRINGTON AND Kid Galahad came face to face in Leeds today to formally announce their IBF world featherweight title clash, set to take place on June 15 at the FD Arena in the champion’s home city.

Below are selected extracts from the exchanges on the top table.

Josh has beaten real good quality, top line fighters and done it in style. There is no doubt in my mind after beating Carl Frampton and Lee Selby that he is the best.

Santa Cruz and Valdez are the fights that he wanted, then this fight was ordered by the IBF and Kid Galahad got there obviously by his winning record and winning an eliminator that gave him mandatory position and I’m sure he is going to give all he can to take that title back to Sheffield, but I just feel that in fighting Josh he needs to step up quite a few bars to get to his level.

When Josh fought Selby, many journalists were calling Selby the best fighter in Britain and his last fight against Carl was the best fight I have seen in a British ring for a long, long time. Josh has got this engine that is unbelievable, with the amount of punches he throws and his tremendous fitness levels.

He has come through in style and not just nicked fights, he has won the fights emphatically. Josh was probably the unfancied guy in the division and his dad has done a great job in bringing him through and deserves all the accolades. Everybody in the trade knows that and the job Sean has done is a brilliant one.

Everybody has got respect for Dominic Ingle and he is a fantastic trainer who has done tremendously well and looks after a few fighters I promote. But, he will have to pull every stop out to get Kid here over the line. He is going to have to be something very special to beat this guy, because he is a special fighter.

Naz (Naseem Hamed) had left the gym and we weren’t on particularly good terms with Naz, but he said to Barry that the only place to go if he wanted to become world champion was the Brendan Ingle gym in Sheffield – and that is where he ended up.

This fight on June 15 is going to represent 14 years of hard work we have put into it. Naz has been in to see Barry and made comments on Josh that I am not going to tell you, but he said some nice words to Barry and said to make sure he looks after his old belt when he gets it. I think Naz is going to be there on the night and it will be great if he is.

Did Sheffield United beat Leeds the other day? So it is one down, two to go – hopefully Leeds has got an ice hockey team we can beat.

We haven’t complained about the six week delay and we know he ain’t hurt his hand, but we don’t want to be beating a kid who is not fully prepared. He’s got an extra six weeks just to make sure he can get in shape. No excuses, no complaints, we want the best Josh Warrington on the night, that is what we want.

He’s got a good 12 weeks now and we know he’s been out and had a bit of a party and eaten a bit too much.

I met Naz in a local mosque and he said to become world champion I need to go and find the Ingle gym. It has been 14-15 years since then, training every day and being hard at it. We are finally here.

I knew the IBF are very strict so I knew this fight would be on. Frank said I was right at the bottom of the list, but look where I am now at the top of the list. There were a lot of complaints from his team about things and complaining about the 35 per cent split.

It doesn’t matter, does it? It is my destiny and I am here now and I am gonna rip that title from them in his home town. All the noise just comes with the territory. If you want to be a champion, this is what you’ve got to do.

I like him and I’ve known Barry a long time. We’ve crossed paths before and quite rightly because he is a professional but, to be fair, he should have stayed as an amateur. And I say that with the greatest of respect, I just think this is too big a step for him, I really do.

Saying that doesn’t mean we’ll be taking this lightly because we’ll be training like we are the challenger, like we always do. So we won’t hold anything back, we won’t be taking it lightly, we’ll just prepare as we always do and that is one hundred per cent focused and switched on. Then coming away: ‘And still’.

I promise you I will be bringing the very best Josh Warrington on that day.

We had some year last year, didn’t we, with two massive fights and two massive occasions. You’ve got to give it to Barry and how daft he is. B*ll*cks to his destiny. You make your bed and lie in it and you’re gonna get it on the night, simple as that.

I wanted to carry on with the journey and carry on winning belts and world titles by fighting the best in the division. Last year we had LEE SELBY and CARL FRAMPTON! Now we’ve got F**king Barry from Sheffield… You know what I mean. It just doesn’t have the same ring to it.

I want to go on and unify the division, I believe I am the best featherweight in the world and if you offered me Santa Cruz tomorrow I would take it, but as champion this is what you’ve got to do, you’ve got to defend your belt against all challengers and on June 15 Barry is in the way.

When you look at it and break it down, he is not as awkward as people make out, only if you give him the time. Look as his level of opposition – he is stepping up a level here and I won’t find him awkward.

Tickets for Warrington v Galahad go on sale via firstdirectarena.com at 12pm on Friday 22nd March and are priced as below: