Probably one of the most frequent comments you will see posted by the boxing Twitterati is that ‘politics’ prevent the big fights getting made. 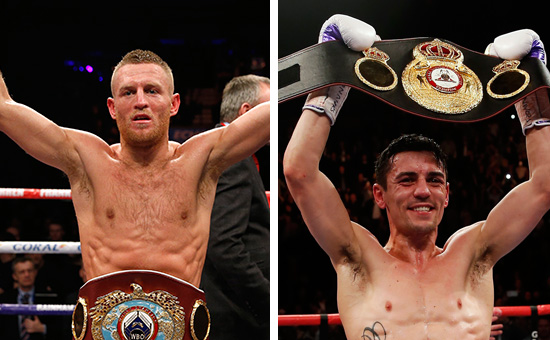 This isn’t entirely true as for most natural big fights there are titles at stake and, if agreements aren’t reached by respective parties, then purse bids come into play and the fight is promoted by the highest bidder.

Occasionally though, there is a fight that needs to be made by public demand. In the case of the potential Terry Flanagan-Anthony Crolla match, of course both fighters hold versions of the world lightweight title, which obviously brings with it some complications – such as them fighting for different promoters and rival networks.

I want this bout to happen. For my part, I am about delivering for Terry the showcase fights he truly deserves and, if I possess an ego, I am happy for it to go, out of the window. Can the Hearns do the same?

Since he joined up with us, we have developed Terry’s career on BoxNation, manoeuvring him into pole position for a shot at the world title, which he won following Jose Zepeda’s unfortunate shoulder dislocation. The Turbo then went into overdrive and silenced the remaining doubters with the destruction of the world class Diego Magdaleno, before negating the threat of the wily Derry Mathews with a mature display in March.

Flanagan vs Crolla needs to happen. The fighters want it and the fight fans want it. Now that gutsy Amir Khan, sadly if inevitably ko’d by Canelo, has made it abundantly clear that he won’t fight Kell Brook –and more about that tomorrow – this is the nation’s most natural and eagerly-anticipated domestic clash.

Two Manchester boys who attended the same school, one City-mad, one an avid United fan – all the ingredients are there. I happen to be an admirer of Crolla, but for Hearn to say this was the best performance ever by a British fighter is a ridiculous claim to make.

Has he forgotten Joe Calzaghe against Jeff Lacy or Ricky Hatton against Kostya Tszyu at the same Manchester arena – which according to Joe Gallagher sold over 10,000? He should have checked with the promoter first as they only claimed 7,000 were inside on the night.

So how could it be the greatest-ever atmosphere the ‘Skyperbole’ commentators were on about?

As I say I am a fan of Crolla but I am certain Terry has the beating of him.

The label of ‘the best lightweight in the world’, so freely bandied about by Crolla’s excitable promoter on Saturday night, is up for grabs and surely can’t be attached to either man until they have determined it in the ring.

Of course we would prefer the Turbo-charge to continue on BoxNation, but we are prepared to put the career of our man and the wishes of the fans first to get this done. He can come back and defend the two titles on BoxNation.

As you would expect, there would have to be certain provisos. An independently-audited joint promotion would have to be put in place, a 50-50 split of the proceeds and a joint undercard of four fights each.

Tickets for the obvious venue of the Manchester Arena would have to be sold by the Arena’s ticket partners, Eventim.

These small details are just common sense and fair play for the fans.

It is fights such as this that the fans want to see, it should also be one that Crolla’s camp want to make happen. I have cleared the path of the major obstacle – so there is no excuse for petty politics.

As the great American referee Mills Lane used to say: “Let’s Get It On!”

More from Frank tomorrow on that Khan ko and what the future holds for him and Liam Smith.