WELSH WIZARD JAY HARRIS: “SWANSEA SEEMS TO PRODUCE ONE TOP CHAMPION EVERY DECADE. PERHAPS IT CAN BE ME FOR THIS ONE!” 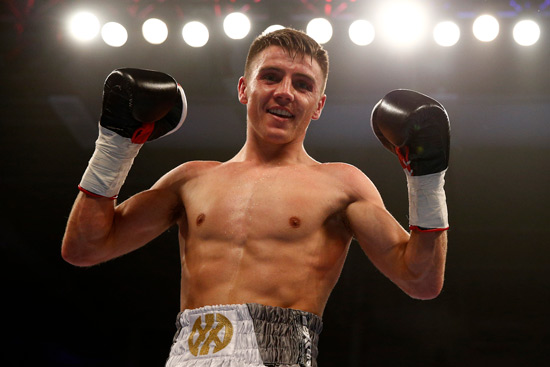 Explosive Swansea flyweight Jay Harris intends to advance the rich prizefighting traditions of both his region and weight class when he makes an audacious challenge for the Commonwealth title at the York Hall, Bethnal Green tomorrow, writes Glynn Evans.

With just 30 pro rounds on his slate, the 26 year old body snatcher confronts Cameroon champion Thomas Essomba in a scheduled 12 rounder that shall be screened live on BoxNation from 7pm.

‘The Swansea region has a good history for boxing since the war,’ states the 9-0 Gary Lockett managed starlet who is coached by his father Peter, a former British featherweight champion.

‘You had the Curvis brothers’ (Cliff and Brian) during the 1960s, Colin Jones and my dad in the 1980s, Floyd Havard in the 1990s, Enzo Maccarinelli during the ‘noughties’. We seem to deliver one top champion every decade. Perhaps it could be me for this one!

‘My dad was British featherweight champion in 1988 and my uncle Mike, dad’s brother, won two Welsh titles in the 80s. My dad regularly sparred Floyd and Colin Jones coached the Welsh squad when I was amateur so I’ve been brought up around our best boxers.’

The Principality, of course, has a fine heritage in the 112lb division which joltin’ Jay has chosen to make his championship bow. Rhondda’s Percy Jones and the incomparable ‘Tylorstown Terror’ Jimmy Wilde both ruled the globe in the second decade of the last century whilst Blackwood’s Robbie Regan boasted an IBF ‘interim’ world title in 1995.

‘Obviously, like all Welshman, I’m aware of the legend of Jimmy Wilde,’ acknowledges the shy, softly spoken and humble Welsh atom, who has wiped out his last six with some astonishingly savage body shots.

‘In time, I’d love to win the British title so myself against Andrew would be a good fight for the Welsh fans. But I leave all that to Gary and my dad. Maybe sometime in future. Let’s get this one out of the way first.’

This week Team Harris will navigate the M4 to mount their challenge at the hallowed East End fight hall where Jay previously sparkled – albeit for just 95 seconds – when ironing out Hungary’s Tibor Nadori in his sixth paid gig 19 months ago.

‘The York Hall is a famous boxing place and I really enjoyed fighting there,’ he recalls.

‘All the fans are very close to the ring so it’s very loud and there’s a real echo around the hall. We’re bringing up a bus load from Swansea and I guarantee they’ll make some noise. They always do.’

And come Saturday morning he intends to depart the capital with a welcome addition to this fabulous fighting family’s already extensive bounty.

He concludes: ‘Dad won the British and fought for the European and Uncle Mike won the Welsh and challenged unsuccessfully for the Commonwealth title in Australia (stopped in eight by Troy Waters in 1989) so, fingers crossed, this will be a new belt for the family cabinet.’