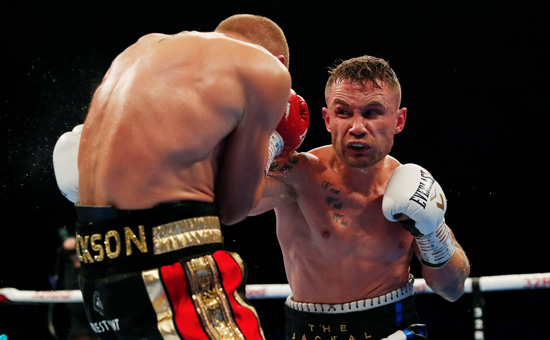 A FANTASTIC EVENING was had by nearly all on Saturday and it was one of those nights where we had our fingers firmly crossed that all the pieces would fall into place to pave the way for some spectacular fight nights before the end of the year.

Our headliner Carl Frampton, in front of his adoring Belfast public at Windsor Park, did his bit in some style against the very game Aussie Luke Jackson. Carl looked a class apart and quite possibly in the best nick of his career.

The ageing process doesn’t seem to have caught up with Carl at this stage of the game and he has lost nothing from when he was supposedly in his pomp against Leo Santa Cruz in July 2016.

He got the job done against Jackson with ruthless efficiency and proved that he has got plenty left in the tank.

He will now bid to become a world champion for the second time at featherweight when he goes in with the IBF king Josh Warrington.

It is a match that demands to be made because – and I’m sure there won’t be too many arguments on this one – it has all the makings of an absolute classic.

For me, it is the tastiest looking domestic showdown out there and when you factor in the amazing support enjoyed by the pair and the fact that they are both at their prime, the occasion will just be something else.

The atmosphere will be simply incredible and the chosen arena will just have to be carved down the middle. I couldn’t even offer up a prediction on the fight other than it will surely be a proper tear-up from start to finish.

Carl is more than back to his best, while Josh is right on top of his game and brimming with confidence after his dismantling of former champion Lee Selby in May, so the timing is just about perfect to put these two in together.

The timing is also about right for Tyson Fury to take the plunge and bid to win the WBC heavyweight championship of the world against the voluble but always charismatic Deontay Wilder.

It is true that the original train of thought was to have Tyson get his touch back over a sequence of three or four routine assignments. Tyson’s mindset has since altered and, after proving that he comfortably has the rounds in him against the capable and durable Francesco Pianeta, he sees no value in repeating the exercise.

Make no mistake, Tyson has got his mojo back and it is doubtful that he would learn more about himself – or us about him – by taking part in another couple of similar tune-ups just for the sake of it.

He believes he is ready to take his place in the biggest heavyweight clash – and toughest fight out there – and so do I. The undefeated lineal champion against the undefeated WBC champion – it just doesn’t get much bigger than that.

Warrington-Frampton and Fury-Wilder completes an unbeatable winter schedule for the soon-to-be launched BT Box Office, which has also secured exclusive UK rights to the biggest fight in world boxing on September 15 between Gennady Golovkin and Saul Alvarez.

Not bad for starters eh! These are the level of fights that we believe to be Box Office-worthy and it is a standard we will always strive to maintain. We have no annual quota to fulfil, it is about the fights being relevant and not possible to deliver via our usual programming.

The only downside on Saturday night was the defeat of Paddy Barnes in his bid to part the champion Cristofer Rosales from his WBC world flyweight title.

Paddy was going well in the first three but the right hook he sustained to the body in the fourth was one of those that five minutes wouldn’t be enough to recover from, let alone ten seconds.

Paddy backed himself in a big way in just his sixth fight as a pro and it didn’t work out for him, but he is a big enough character to come again and I’m sure he will.