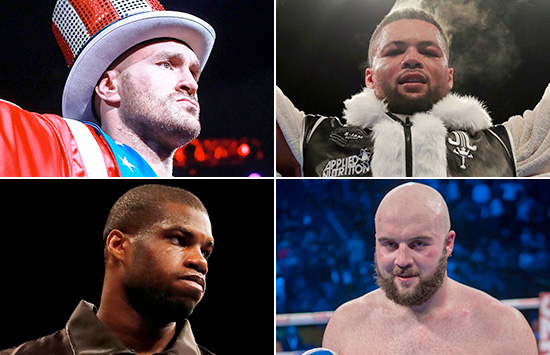 Literary wits and wags have a long been a part of the big time boxing scene, from George Bernard Shaw through to Damon Runyon, Norman Mailer and Budd Schulberg. Take this example from the famous Hollywood sage Dorothy Parker, celebrated for her crushing putdowns: “if all the British heavyweights were laid end to end – we  wouldn’t be surprised”

Nowadays Big Brits are ruling the ring roost and the future is draped in the Union Jack.

Okay so Andy Ruiz jnr upended Anthony Joshua and although he is based in the US he is proud of his Mexican heritage. And while Deontay Wilder retained his WBC title in his brisling about with Tyson Fury it was a highly dodgy draw. A heavyweight heist in Las Vegas.

Gypsy King Fury is the lead performer in a quartet promoted by Hall of Famer Frank Warren which form a sort of pugilistic pop group. You might call them Take That! Or Wham!

Wannabes Daniel Dubois, Nathan Gorman and Joe Joyce comprise the rest of the fearsome foursome All are unbeaten and feature on a highly watchable bill at London’s O2 on July 13. The first two are paired with each other in a rare domestic dust-up which promises to be the heavyweight corker of the year while Joyce, the Rio Olympic silver medallist, faces the American world title contender Bryant Jennings and promises it will be another occasion when a Yank is spanked.All three Englishmen  have their eyes on the prize – a future challenge for what is still the richest reward in sport

How times have changed for the good old USA.. As in the Olympics, too.

I am grateful to my mate Colin Hart,the Sun columnist, for assembling the hit list of heavyweights over the years of those who have sought, fought and often won world domination from the shores.

To unearth the last American world heavyweight champion who won an Olympic gold medal you have to go back 31 years to Seoul 1988 when fomer Army sergeant Ray Mercer knocked out every opponent en route to the Games heavyweight title. Three years  later he defeated the Italian Francesco Damiani to  become WBO pro champion. Otherwise his somewhat undistinguished career was pockmarked by an allegation that he once asked an opponent to “throw” a fight when he was out of condition

Before Mercer you have to turn the clock back another quarter of a century to the halcyon heavyweight days for American Olympians of Floyd Patterson, Muhammad Ali, Joe Frazier and George Foreman.

As Hart points out over the last quarter of a century home fans have celebrated the triumphs of eight Britons who have held versions of the world championship.

Among them are superstars Lennox Lewis, Frank Bruno, David Haye and Joshua.

But for 93 years our heavyweights were subjected to merciless ridicule and humiliation in the United States for failing to provide a world champion.

From the moment Bob ‘Ruby Robert’ Fitzsimmons, lost his crown to James J Jeffries, in 1899 in New York, it took almost a century before Lennox lifted the gloom of constant defeat.

In those miserable intervening years when America held an iron grip on the division 11 of our finest, including Henry Cooper, Brian London and Richard Dunn , tried to emulate Cornish-born Fitzsimmons.

With the exception of Tommy Farr and Joe Bugner, they were either knocked out or stopped inside the distance.

It gave cynical American scribes all the ammunition they needed to mock and sneer at the state of British boxing.

They constantly dismissed British contenders and called them “Horizontal heavyweights”.

And they also took delight in accusing them of having chins made out of extremely fragile bone china.

Much of this can be attributed to Phil Scott, briefly British champion between the two World Wars, who had several fights in the States, was mainly responsible for starting much of the derision and scorn.

His favourite ploy was to fall to the canvas, clutching his crotch claiming he had been hit low.

He found those dubious tactics worked well as no less than seven of his opponents ended up being disqualified.Because of of this was known in America as ‘Fainting’ Phil Scott.

His manager Jimmy Johnston declared: “Philip has earned more money lying down than most fighters have standing up”.

Welshman Tommy Farr was one of the few who earned respect across the Atlantic, for the heroic 15-round battle he gave the great Joe Louis, then in his prime, before losing a points decision in Yankee Stadium, New York, in 1937. As Farr was to say later:”Every time I hear the name Joe Louis my nose bleeds.”

And Don Cockell was grudgingly admired for bravely standing up to being brutalised by Rocky Marciano for nine rounds in San Francisco in 1955.

It is good old Lennox Lewis, the Brit who won the Olympic super-heavyweight gold for Canada we have to thank for changing the image of ‘horizontal’ British heavyweights by becoming the undisputed champion.