It was a question which stunned George Groves almost as much as the pile-driver punch thrown by Carl Froch at Wembley, leaving him speechless probably for the first time in his life.

It came during the build-up to last night’s world title fight in Las Vegas with Badou Jack. One of those feisty, right-on female interviewers who now seem to proliferate in boxing across the pond demanded to know:  “Would you have an issue fighting a transgender man who was once a woman?”

What?? She also posed the same question to Jack, who was similarly nonplussed.

When understandably no response came from either she persisted, stating it was relevant because “there some things happening now in  boxing and it looks like very soon there are going to be transgender fighters in the professional boxing ring.” 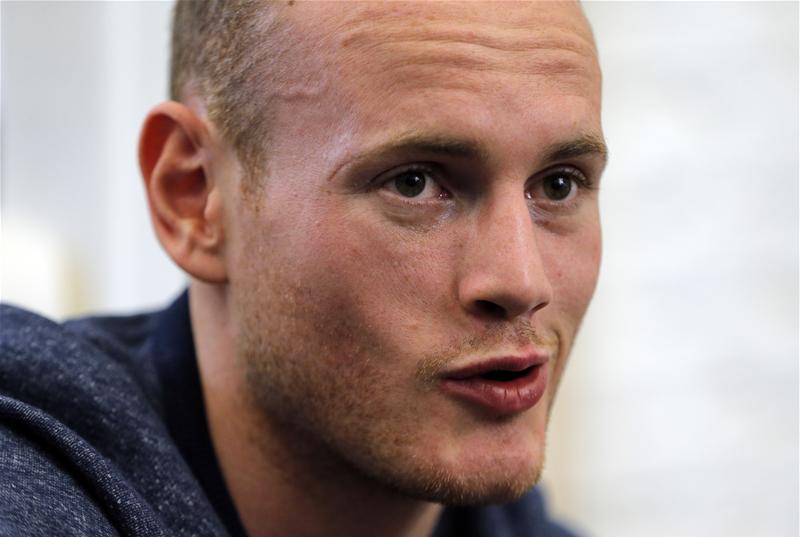 Well, that was clearly news to Groves and Badou, which is why neither proferred a view amid a feet-shuffling silence before the admirable Kelly Swanson, the promotion’s publicist who was conducting the media conference, came to their rescue. “We’re here to talk about the fight,” she  said. “They obviously need to get more background about this. They’ll have to get back to you.”

You can bet they won’t. Not before they’ve had a chat with Kellie (nee Frank) Maloney.

Well, we know of female boxers, and gay boxers. But transgender boxers? Apparently they are big in Thailand (now there’s a surprise) and one transgender person, 34-year-old Fallon Fox, is currently competing in MMA.

I believe there have been discussions  at Olympic level about how and future transgender folk should be categorised in sport, no doubt because of the conversion of 1976 decathlon champion Bruce Jenner to Caitlyn.

Just in case, one supposes, that Usain Bolt is in the process of becoming Una Bolt.

But transgender boxing? A whole new ball game, so to speak.

Winstone, 58, the archetypal screen tough guy, joined London’s famed fight academy Repton ABC as a 12-year-old and over the next 10 years, won 80 out of 88 bouts. He was London schoolboy welterweight champion three times, boxing twice for England.

But hard nut that he is, Winstone was certainly not alone when wetting himself when he met one of the notorious Kray twins. He reveals it was back in 1957 – and he was just six months old at the time.

Ronnie Kray had dropped in at the Winstone family home in London’s East End – his father had boxed with both Reggie and Ronnie at the Lansdowne Club in Hackney – and Ronnie picked up the young Winstone, who promptly peed all over his new raincoat.

“I’m told it kind of went quiet and then Ronnie laughed and everyone laughed,” he reminisced on Desert Island Discs. That must have been a relief! Especially for wee Ray

Winstone also says that as a youngster he had hard fights outside the ring as well as in it. “I’ve had many clumps as well, you know, black eyes. You don’t win all the time.”

That’s not all Whyte, Dillian

When Brixton heavyweight Dillian Whyte distastefully hoisted himself aboard the ticket-selling bandwagon to build up a prospective fight with Olympic champion Anthony Joshua, who he floored and defeated when they were novice amateurs (both appeared on last night’s O2 show) he  labelled Joshua a ‘scumbag drug dealer from Watford.’

A reference to Joshua’s arrest and conviction in 2011 as a teenager for possessing cannabis with intent to supply.

But isn’t this the same Dillian Whyte who a year later was himself banned from boxing for two years for using an illegal substance?

Never was the phrase pots and kettles more appropriate.

Smith has the X-factor

My vote has just gone in for Britain’s Best Young Boxer of the Year, as awarded by the Boxing Writers’ Club. The choice has been a tough ‘un in a year in which youthful talent is there in bundles, but I’m nominating Mitchell Smith.

He’s brash, he’s flash but he can box and bang and he entertains. ”The new Naz,” Frank Warren calls the undefeated super-featherweight from the unlikely boxing citadel of Harrow, where he headlines at the leisure centre against George Jupp on October 30.

I rather hope not, Frank. One Naz was more than enough for anyone.

British boxing certainly has talent, but for me young master-blaster Smith has the X-Factor.

Some sad news from the media front. Mike King, an award-winning sports photographer, and one-time colleague of mine who for many years was a familiar and friendly face at ringside died suddenly this week, aged just 53.  An unassuming, immensely popular figure with boxing people; a brilliant snapper who worked for The Observer, Telegraph and Getty Images.  He will be sorely missed.

Quotes Of The Week

I respect Golovkin and I think he is a great fighter but I am not here to be be his friend, I am here to be his opponent. I promise you, there will be blood.

“I’m a little scared. I am a regular guy, I’m not a crazy guy – maybe one per cent – because I understand my situation. This is a sport, not a game. This is scary.”

Gennady Golovkin, WBC and WBO champion obviously appreciates how tough it will be against a fellow fearsome puncher.