“WHEN I GET TO WOODSTOCK IT WILL BE AN EASY EARNER AND I WILL END HIS CAREER,” blasts Bowen 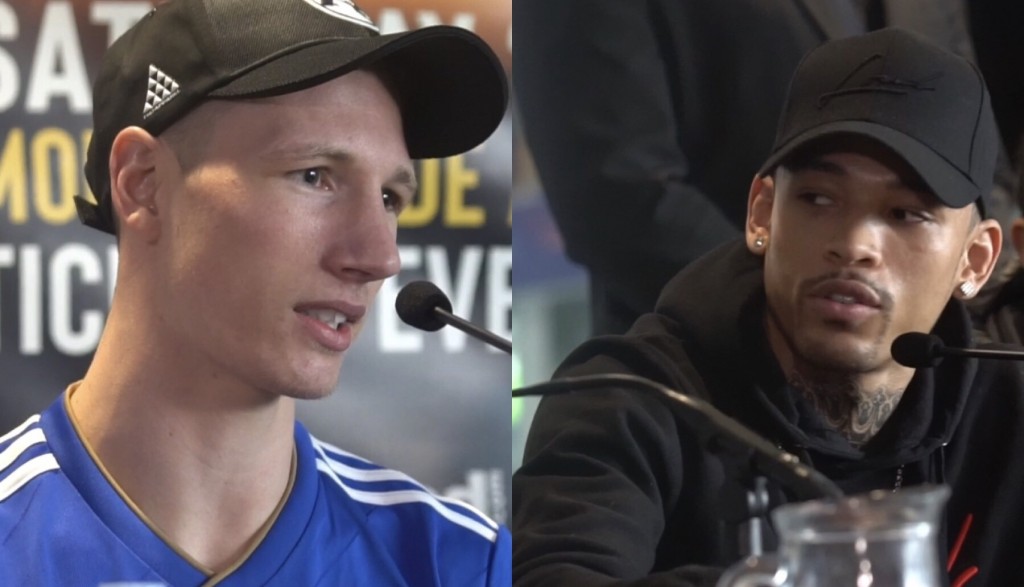 SAM BOWEN came face-to-face with big fight rival Jordan McCorry ahead of his British super-featherweight title defence against the Scot at Leicester’s Morningside Arena on Saturday, live on BT Sport.

Lyon Woodstock plans on returning to winning ways on the bill against Spaniard Sergio Gonzalez. after his first career loss, against Archie Sharp. He is eyeing up the winner of Bowen v McCorry.

Here are a selection of quotes from today’s press conference.

SAM BOWEN: “I’m very excited to be defending my title in Leicester. It is literally on my door step and I have a vast amount of support coming. I have a lot respect for Jordan. He has taken a fight when others wouldn’t. He is fit and can use a few different styles. I have to get the win and will do what it takes. I want a Lonsdale belt for keeps, but it depends on how long it takes to get it. I am happy to fight Woodstock whenever he is ready. It is an easy earner and it will finish his career.”

JORDAN McCORRY: “I bring more than aggression now Craig Dixon is training me. He has installed something different and I don’t go forward like I used to. It would be dynamite to win and I am doing it in the lion’s den. I don’t know if Sam is hype. He hasn’t fought anyone that good, but he does seem an avoided fighter. I’m a Celtic fan and I haven’t got a problem with Sam wearing a Leicester City shirt, but I have with Brendan Rodgers. He is snake.”

NATHAN GORMAN: “Kevin knows his way around the ring and I will just have to do my best even though it is four days’ notice. I was preparing to fight someone totally different. Kevin has only been stopped by Anthony Joshua and on a cut by Petar Milas. My friend Daniel, Vitali Klitschko, Tyson Fury and Kubrat Pulev couldn’t stop him. He is probably the most durable fighter on the planet.” “If it was down to me I’d fight Daniel Dubois this Saturday truly, but I reckon it will probably be end of the year. Whenever he is ready. My style beats Dubois 24/7 and if I can’t see his punches coming I’m not a gifted boxer.

SAM MAXWELL: “I have been asking for a title fight, Frank Warren and MTK have delivered. Some of my peers on Team GB are superstars and it looks like I am further back. I want to be where they are. By the end of the year I will be better known to the public. Sediri boxed at a high level as an amateur and is tricky. He will test me and people will see me at my best. I will have to work and this contest will propel me. I will be looking at Ohara Davies, Jack Catterall and the WBO champion Maurice Hooker by the end of the year. I want Ohara. I have the beating of him.”

LYON WOODSTOCK: “I would fight Sam Bowen for free. He says he will fight me whenever I want it. I want the British title whether Sam or Jordan has it. The loss to Archie wasn’t a setback. Those who makes mistakes progress further in life if they have character and that is what boxing boils down to. It wasn’t a reality check. It made me approach things in a different way.”

CJ CHALLENGER: “This is the same as every fight and there is no extra pressure because we are both local fighters. It’s an honour to be involved in a fight like this. Kyle is a good guy and no mug.”

KYLE HAYWOOD: “People in Leicester are going mad for this fight. It is a 50-50 fight and brilliant for the fans in Leicester. CJ is a good fighter, good mover, has good skills. It is up to me to close the gap and operate at my pace. It will be so exciting. There isn’t animosity, but he is standing in my way.”

Remaining tickets are available via Eventbrite