WHEN MY RIO PLAN BIT THE DUST 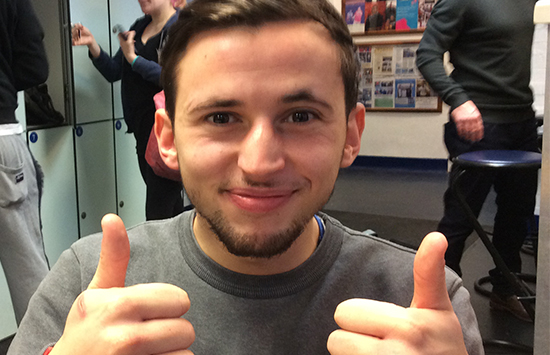 Harvey Horn’s opening night as a professional at the Copper Box is fast approaching on December 9. Here, in his first exclusive Fighter Diary, the former outstanding amateur reveals the story behind his Olympic omission and subsequent nudge towards the pro game…

I WAS ON the GB team in Sheffield for three years and it probably felt like longer because I got on at a young age and I had a lot of fights – in the three years I had something like 30 fights.

When you are part of the squad you go up there on the Monday and train twice, train three times on Tuesday, same again on Wednesday, twice on Thursday, then home for the weekend. We had digs up there where we stayed, so it was a little bit like going to university without the drinking and revelry… I suppose!

We were well behaved up there because we were there to do a job, even though there were a lot of characters on the squad. I really enjoyed it.

The carrot with being on GB is the Olympics and it was always in my head that I wanted to compete in the Games. I always thought I had the ability to go to the Olympics.

I got on at 18, then hit 19, was winning a few fights but had people like Ashley Williams and Ollie Simpson in front of me. I carried on winning for another six months so half way through the year I thought it was a real possibility.

I won a European silver medal at 19 in 2015 with just a year to go to the Olympics and I thought ‘hold on, I am in the No.1 spot’. I was the first pick for the WSBs, I was winning nearly everything I was sent to and I really thought for about a year that I was definitely going. There was nobody there to threaten me and nobody that I felt was in the same league as me.

Then January 2016 came around and I went to Miami to box the American Hernandez – who won a bronze at the Olympics – and I boxed really well over there, handled him quite comfortably and got the win in his back yard.

Galal Yafai had just got on – for about two or three months – and he got a bronze out in Brazil in a test event before going to a tournament in Hungry in the February.

Now, all of a sudden, I felt like I had someone on my toes and a bit of pressure – not as clear cut as a thought. I went to a tournament out in Bulgaria and I boxed a Korean in the first round.

I didn’t box great – the coaches said I did alright – but I lost on a split decision. It was a gutter, but I still didn’t think my Olympic dream was in jeopardy.

It was strange that the next week they said we were going to Germany and I thought they must be pitting us against each other and giving me another chance to perform.

I went out there, drew a German in the first round. I won the first two rounds, had a point taken off me in the last and it was ridiculous. I remember the ref and everything about it. As soon as that point was taken off me I knew they were stitching me up.

I lost the fight there but even then I still didn’t think the Olympics was gone for me because Galal had won a gold and a bronze in two tournaments, while I won four golds in major tournaments. I was 13 in the world rankings and he wasn’t in the top 16.

So I thought it was definitely going to be me flying to Rio and then he got sent to the qualifier, which I was gutted about – totally gutted.

It certainly felt like they had already made up their minds who was getting the place at the time. I was very angry because there wasn’t any facts that I could see which would have you choose him over me.

Even Sunny Edwards – who was doing alright, but on development – I thought was more of a threat to me because he had a bit more about him. More skill and more slippery.

They said to me that selection wasn’t going to be based on sparring and would be all on international performance. As far as I was concerned, I’d had two stinkers, but I didn’t think that should take away from over two and a half years of wins.

They obviously had their reasons and it didn’t go too well for them.