WHEN THE PIRANHA MET THE JACKAL 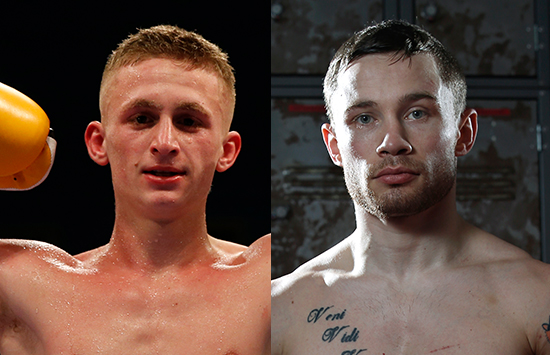 NEW: Our fighting talk feature on what’s said and done inside – and outside – of the ropes, this week featuring some fishy talk from Carl Frampton, Jamie Moore setting the record straight and Martin Murray making his point…

CARL FRAMPTON DIDN’T need his memory jogging one little bit when the name of a previous young sparring partner was put to him.

Elite level fighters such as Carl see plenty come and go during camps, but this one made quite an impression while he was preparing for his second encounter with Leo Santa Cruz.

He also now happens to be a current stablemate, who goes by the name of Piranha – and he was far from a fish out of water mixing it with a two-weight world champion.

The name in question, of course, is Ryan Garner.

“Yes, a very, very good fighter,” Carl instantly responded. “I did a lot of sparring with Ryan when I was with the previous outfit and he is a nice kid, who is very, very physically strong.”

The pair’s promoter Frank Warren has put it out there that Ryan reminds him of a ‘young Naz’, but Carl differs and likens the Southampton snapper to another icon of the noughties.

“A similar style to Ricky Hatton – relentless and comes forward a lot. Ricky kind of, not being disrespectful to someone who was an amazing champion, could be a bit reckless and jump in. That was what won him fights because he could overwhelm people.

“Ryan Garner is like Ricky Hatton with a little bit of finesse about him as well.

“The kid could do a lot, I genuinely believe that. He is a big lump as well for a super featherweight, with big, big legs! He was telling me he makes super feather pretty easy, but everyone says that…

“I think we will see him moving up the rankings pretty soon,” added Carl, who doesn’t rule out drafting his young friend in for a further stint of summer work experience.

“He was wrong for Donaire, but he would be good for Valdez, for example. So if it someone like Valdez next then of course, I would love to have him in.”

JAMIE MOORE RECENTLY experienced a boxing weekend that, in his own words, left him feeling on ‘cloud nine’.

Carl Frampton recaptured his sparkle with a masterclass performance against Nonito Donaire in Belfast, where his teammate Steven Ward also tasted victory, although Conrad Cummings suffered defeat after an epic confrontation with Luke Keeler. Over in Liverpool, another of his charges, Tommy Coyle, claimed the Commonwealth crown with a sixth round stoppage of Sean Dodd. 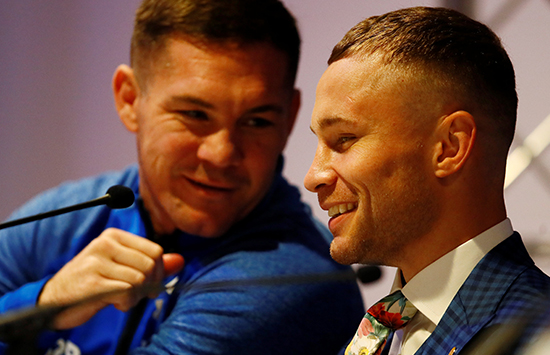 Despite his obvious and well deserved elation, the Manchester-based trainer still felt compelled to issue a couple of missives on Twitter pointing out that, while photographic and video evidence might suggest otherwise, his talented group work bloody hard at their craft and are entitled to let off a bit of steam during occasional downtime.

The perception by some is that a training camp in Tenerife took on the appearance of a stag weekend, but Moore insists it was nothing of the sort, although he is more than happy for his squad to work with a smile on their faces.

“I think a lot of the old school members of the boxing fraternity will have frowned over the way we go about the job,” reasoned the former British champion. “Social media is making people much more aware of what goes on in camps and it can make it look like something it is not.

“The reason I put those tweets out was to point out to people that the images were just a little tiny snapshots of moments in time. It is not how we go about our business all the time.

“I am one of the biggest jokers you will ever come across and I am like a big kid, but when I get in that gym or I am sat down at home on my own watching videos of opponents and setting out tactics and gameplans, or speaking to lads – that is when I am being serious and mean business.

“Either side of that I am the world’s worst for having a laugh, but I don’t see a problem with that because I think it takes an edge off and allows the lads to relax.

“It makes the training easier in the sense of, while physically it is so hard, if you can take minds off it and have a giggle, it just makes the job so much easier.”

That being said, Moore knows more than most that he is in a results business and there would have been a few ‘I told you so’s’ aimed in his direction had his practices not been vindicated in such a fashion.

“Let’s have it right though, I’d have looked a right fool if my fighters didn’t perform the other weekend and I would have proved all the naysayers right who say that is not how you do it.

“That is why I put the tweets out as well because no doubt, over the next couple of years, we will do the same thing again and one or more of my fighters will lose. It is going to happen because it is part and parcel of life and boxing.

“I wanted to document it now because when you get the people who are critical of what you do who say ‘see, that is not how you work’, I will pull those tweets up and point out that it is not the case and the lad didn’t perform for whatever reason.

“Not because we have a bit of a giggle in training camp when we are not in the gym.”

NORMALLY THE VERBAL jousting commonplace at fight press conferences is designed to gain a psychological advantage over the opposition.

Martin Murray adopted an alternative approach at the Landmark Hotel last week and aimed his early fire at the promoter.

The St Helens man raised his objection when Frank Warren ventured into mentioning potential future opponents for Billy Joe Saunders, who defends his WBO world middleweight title against Murray at the 02 Arena on June 23. 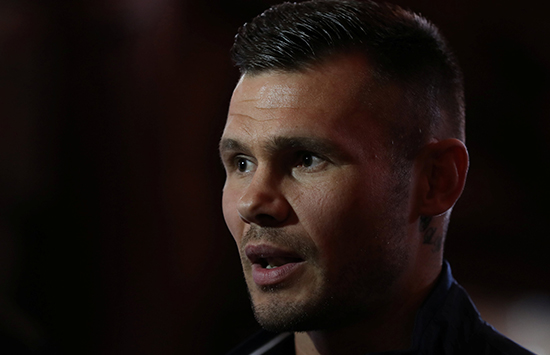 Murray was having none of it when the likes of George Groves and James DeGale were touted as possibilities and pointed out that these should also be options for him should he unseat the champion.

“The thing is, I’ve got respect for Billy and I know he is not overlooking me – me the same with him – and I know that Frank has had his back from day one,” explained the 35-year-old.

“But, with them going on about it all the time, I just had to say something because it was doing my head in! It never bothered me before but when they started going on about it I just wanted to get my point across.

“What happens when I win? I am with Frank now and I am his fighter. I know he is loyal to Billy because he has been with him a long time, but it was just pi**ing me off a bit and I had to say my piece.”

Murray, however, does get why Billy Joe’s future prospects are a hot topic following the Canelo capers and the likelihood of a match with the Mexican or Gennady Golovkin being delayed further.

“I do understand the reason behind all the talk, but at least it made it interesting and was something different!”