WHO WILL BE CROWNED FIGHTING KING OF MEXICO?

As Britain catches its breath before the next clutch of major fight dates – including the visit of Floyd Mayweather protégé Gervonta Davis to London on May 20 – the attention of the boxing world turns to Las Vegas this weekend for an all-Mexican affair that has captured the imagination.

It is a huge fight of significant global interest, so naturally BoxNation will be delivering it for UK fans, with coverage from the T-Mobile Arena beginning at 2am on Sunday morning.

Around the time this fight was made, there was consideration given to Billy Joe Saunders being in the opposite corner to Canelo, but the fact it is on a national holiday resulted in Golden Boy opting to stage an all-Mexican showdown.

Canelo, having resisted taking the plunge at middleweight for so long and therefore delaying a confrontation with Gennady Golovkin, for this fight is happy to go over the limit to accommodate Chavez.

Chavez has had issues with the scales in the past in making super middleweight and it is widely reported that a large chunk of his purse depends on him making the agreed catchweight of 164.5 pounds.

It will be good to see Canelo pick on someone his own size for once – although I wouldn’t be surprised if he is still the heavier man come the first bell – as the disparity in bulk between himself and opponents at super welterweight was extreme.

Taking weight out of the equation, I believe Canelo will simply be too rugged for Chavez. Macho pride will come into play, which should make it a decent scrap, but I do predict Canelo forcing a stoppage and being crowned head honcho. 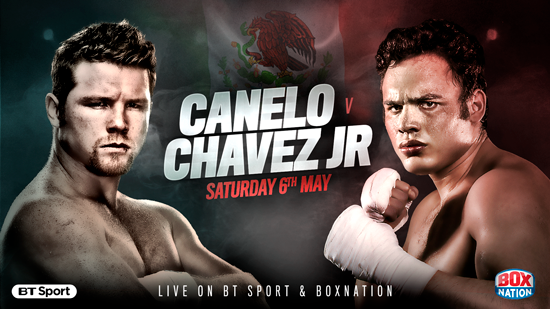 I am delighted that BoxNation continues to be the UK home for the big hitters of the sport, such as Canelo, Golovkin, Lomachenko and the other world leaders of the ring.

The Channel of Champions has consistently delivered the world’s elite and we intend to carry on doing so, adding the biggest, most intriguing fights to our bumper schedule.

The fact that we are also raising the bar with our domestic content in our alignment with BT Sport sees us making a huge contribution to what is a booming sport in this country.

The channel having the massively increased audience of BT subscribers gives these fights and events the showcase they deserve and we are delighted with this development.

Boxing is on such a high in the UK with top shows being put on across the board on various platforms, as well as the biggest fights being broadcast from overseas. If you are a boxing fan right now it must be some sort of utopia.

Boxing is a thriving, exciting sport that is currently silencing the knockers – along with the odd vitriolic columnists – who have done their best to sideline the fight game over the years.

It is becoming a success story in all areas – from people of all ages punching in the gym as a hobby, to boxing training be employed just for fitness, to assisting people therapeutically and solving social issues.

Even Prince Harry recently revealed that he turned to boxing to help him with his troubles. There would be a massive void in a lot of lives without the various levels of participation in this sport.

Boxing has a role in society and it is now reflected in its popularity in all walks of life.

The Royal seal of approval is a further endorsement which represents the ripple effect of a feelgood factor engulfing the game.

And long may it continue.