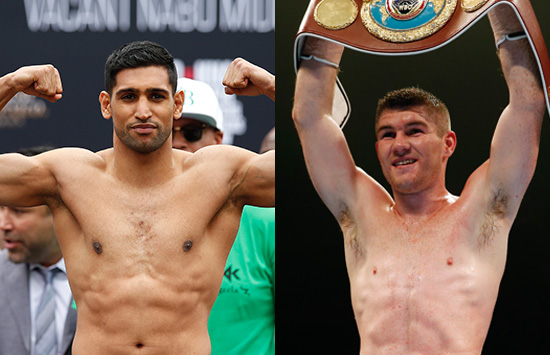 The image many will retain of Amir Khan’s courageous but abortive excursion to Las Vegas last weekend is of him lying flat out on the canvas, ko’d by a Canelo clout that would have felled the proverbial ox.

But we can be sure of one thing. As the song goes, he will pick himself up, dust himself down and start all over again.

Amir insists there is still plenty of fight – and fights – left in him at 29. Obviously these will not be at middleweight. That ship has sailed.

He says he plans to continue back at welterweight – he is mandatory for Danny Garcia’s WBC belt. But I am not alone in wondering if this is wise.

It is always harder to shed weight than to put it on and Khan, who was Olympic silver medallist at lightweight, world champion at light-welter and latterly boxing at welter and middle, will find it difficult to sweat back down and operate efficiently again at 147lb.

There is also the risk that Garcia, although by no means as thunderously devastating a hitter as Saul Alvarez, will be sufficiently boosted by seeing Khan, brilliantly as he boxed for five rounds, so brutally chopped down when his chin was exposed, to repeat what he did to him back in July 2012.

Moreover Khan may well find he is a much harder sell in the US after such an emphatic defeat.

Which is why I hope he means what he says when he tells us he would like his next fight to be back in Britain.

If so, it certainly won’t be against Kell Brook. He has made it abundantly clearer he is not going to give a man he dislikes so much a mega-meal ticket.

His attitude has echoes of Ricky Hatton’s terminal unwillingness to allow the ever-needling Junior Witter a shot at his title.

However there is one appetite-whetting contest that would not only be a terrific attraction but might suit Khan to take.

I suspect he would now be more comfortable at 154lb where the WBO super–welterweight champion (that’s light-middleweight in old money) is Liverpool’s Liam ‘Beefy’ Smith.

As Frank Warren has intimated, this would be a fantastic match-up and one that Khan might fancy as the unbeaten Scouser, while craftily aggressive, is not quite as venomous a single puncher as Canelo.

It is a bout which seems to make sense – providing of course Smith comes through unscathed against the man from Montenegro, Predrag Radosevic, in Liverpool next month.

An autumn or December date in Manchester, Liverpool or Bolton would be a surefire blockbuster, one I believe the Khan camp are giving serious consideration.

A Briggs too far?

David Haye said last week that he ‘thinks’ Shannon Briggs has been given a Board of Control license for the ancient American’s scheduled appearance at London’s the O2 next Saturday.

Maybe the Hayemaker should think again for my understanding from the Board’s general secretary Robert Smith is that they are still awaiting details of 44-year-old Briggs’ medical history and that so far no license has been issued in this country.

Curious, too, that Brigg’s named opponent, the very useful Alexander Dimitrenko, Russia’s German-based former Euro champ, has no knowledge of fight, according to his lawyer, one Lukke Moerschner. 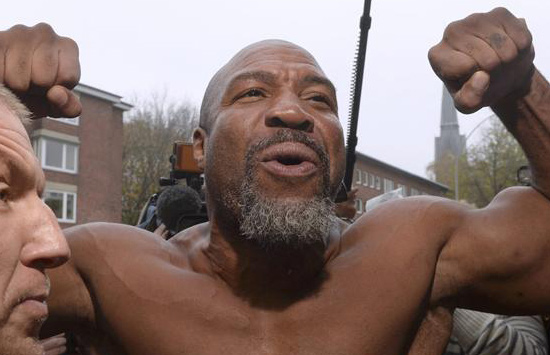 He says on the German website boxwelt.com that his client has never been contacted about fighting Briggs on the undercard of Haye’s second comeback contest against Arnold ‘The Cobra’ Gjergjaj from Kosovo (which again will be screened on free-to-air lads’ channel Dave).

Dimitrenko has also tweeted that he was not fighting Briggs, who has declared he is lined up for a future bout with Haye. Perhaps breath should not be held.

Back in December I suggested fight fans should note the name Jordan Thompson.

On Friday night BoxNation viewers were able to see why when the gangling 6ft 7in cruiserweight from Manchester, known as ‘Troublesome’, swiftly and sweetly dispatched Poland’s Mateusz Gatek for his third one-round ko victory in a row.

Thompson’s impressively brief encounter was an appetizer for ‘Cracker’ Jack Catterall’s superbly slick defence of his WBO Intercontinental super-lightweight title against the willing but outclassed Joe Hughes over 12 rounds on Queensberry’s Bolton show.

I confess a vested interest. I have watched Jordan grow up as his dad, Geoff, MBE, is not only a pal of mine but one of the few black sports administrators in the land, and one of the most able, if understated, as executive chair of the award-winning Manchester-based Youth Charter for Sport. Among other things, this helps keep potentially wayward kids on the straight and narrow.

Moreover, the 6ft 6in Geoff is a a former multi-times world karate champion, as is Jordan’s mum, Janice.

Interestingly the 22-year-old, whose sister Francesca is making her name as a ballet dancer in London, has made the transition from the tennis court, where he was a highly promising junior international.

But he found competing on the Men’s Tour too costly for him to develop further and that there were certain barriers in tennis (“I doubt I would have been allowed to become the next Arthur Ashe”) that don’t exist in boxing.

After a short spell on unlicensed shows he is now under the expert tutelage of Lee Beard, who believes he has the potential to go all the way.

I agree, and expect Jordan to grow into a 16-stone plus heavyweight over the next couple of years.

As BoxNation commentator John Rawling said: “Something tells me we’ll be hearing a lot more about this lad.”

He’s on his route, I’m on my route, and we just don’t agree with each other. Basically, I don’t like him and I’m not going to give him the fight. Eddie Hearn can keep saying that he’s massive, he’s this, he’s that, he’s a big name: he’s not.

He’s not just a demolition artist, he’s a heartbreaker.

BoxNation’s Steve Lillis sums up the clout of Canelo

We Mexicans don’t f*** around. I don’t fear anyone

After the fight, I rang my promoter Frank Warren the next day and told him that he had to make this fight. He’s doing everything he can to put it on, but I think Crolla’s team are trying to con the public…I don’t think they fancy it. I don’t think it’s anything to do with (Anthony) Crolla but I think the two reasons are that his team –– and mainly his trainer Joe Gallagher –– doesn’t believe that he can beat me or that they want more money.

Everybody in America has sat up and took heed of Anthony Crolla. He’s gone to another level now.That fight [against Flanagan] would be fourth or fifth option. He’s got two fights being put to him at the moment so that’s not one that’s up there. A Las Vegas night against Linares is one and Old Trafford is another. Those two nights are before anything else.