Why boxing matters –even in your dreams! 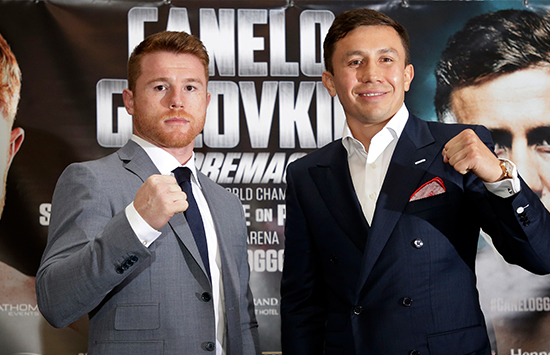 There are some fights you can only dream about. Mythical match-ups that happen in the imagination but you wish had been reality.

Would Muhammad Ali have been too artful and speedy for Mike Tyson when both were at their peak, or in their prime? Who would have been the sweeter of the Sugar Rays – Robinson or Leonard?

Whose jab would have been more devastating – that of Joe Louis or Larry Holmes?

Who would have been left standing had the similarly savage styles of Rocky Marciano and Joe Frazier waged inevitably brutal and bloody warfare?

These – and dozens more pairings that make one drool as well as dream – can be fought only in the mind and not the ring.

But now one ‘dream’ fight is about to become reality with the confirmation that the two finest fighters of the age, Saul ‘Canelo’ Alvarez and Gennady Golovkin, are to battle it out for multiple world middleweight belts in Las Vegas on September 16.

What a night that will be, and what a coup – the biggest in the channel’s five-year history – for BoxNation who will screen it live on their newly-established pay-per-view outlet.

The exclusive TV deal that brings together into UK homes the Mexican whose fists are as fiery as his flame-coloured barnet and the ever-smiling assassin from Kazakhstan, considered by many the ultimate pound-for-pounder, was made public at a media-packed London hotel ballroom this week.

“The perfect match” was how Golden Boy promoter Oscar de la Hoya described it. And there’s no argument with that.

Forget the over-hyped let-down between Floyd Mayweather jnr and Manny Pacquiao, and the upcoming hybrid freak show featuring the Money Man and UFC’s Conor McGregor; this one can’t fail to be an edge-of-the seat humdinger.

When it was first mooted I believed Triple G would win. Now, on recent performances, I am wavering. It is a contest that has divided the boxing fraternity. Neither has the inclination to faff around.

Bernard Hopkins describes it as potentially the best fight in the history of middleweight boxing.

That’s quite something to live up to in the light of some of the classics that have gone before. Such as Sugar Ray Robinson and Jake La Motta, Robinson v Carmen Basilio or Marvin Hagler and Tommy Hearns.

It certainly gives fight fans something to talk about.

And by coincidence, that is exactly what my good friend and verbal spar-mate Colin Hart and are doing on BoxNation’s Boxing Matters to be screened next Monday evening at 7pm.

Although I say it myself, it is an intriguing watch. Refereed by the estimable Alex Steedman, Harty and I debate, discuss and sometimes disagree over the Fantasy Fights we wish could have been made and we would have loved to cover.

One we did concur on was that Ali would beat Tyson, psychologically and physically out-maneuvering the easily-riled Iron Mike, taunting and mesmerising him as he did boxing’s biggest bullies, Sonny Liston and George Foreman.

Our judgement was based on them both being at the zenith of their careers, the pre-exile Ali of 1967 when he achieved heavyweight perfection against Cleveland Williams and Zora Folley. And the awesome Tyson of the late eighties in his early years of world championship domination.

Others may demur, as they might our combined view that Joe Calzaghe would have beaten Carl Froch and that Robinson would have outboxed every welter and middleweight including Leonard.

Marvin Hagler v Carlos Monzon would have been a mouthwatering clash. At 160lbs, Hagler, next to Ali my all-time favourite fighter, is my pick.

Colin goes for the murderous Argentinian (he actually did time for committing one, too), and prefers Holmes over Louis.

Not me. I go for the young Brown Bomber to have licked them all save Ali.

On the domestic front, would Henry Cooper’s ‘ammer have exploded on Frank Bruno’s vulnerable chin as it memorably did Ali’s?

And what a scraps they would have been had another of my favourites, pugnacious lightweight Dave Charnley pitted his southpaw fists against British world beaters Ken Buchanan, Jim Watt or Terry Flanagan.

Unquestionably the fight I would have re-mortgaged my house to watch is Ali v Tyson; Colin says his would have been between the greatest-ever Mexican, Ruben Olivares, and thunder-punching bantamweight compatriot Carlos Zarate. No Mexican stand-off there.

Their ko percentages were such that it might have gone only one round either way; but what a momentous round that would have been.

Unquestionably Mayweather has been the best of his generation, but perhaps not the best of the respective generations of the two Sugar Rays.

I believe both would have outpointed him at welterweight.

And after Canelo v Golovkin, how about other ‘dream’ fights that might yet be: Fancy Gervonta Davis and Vasyl Lomachenko? Or Terence Crawford v Errol Spence. Me too. But you’d neeed to form a queue behind me for those sizzlers.

Incidentally, weve also pitched both Canelo and Golovkin into boxing’s generation game matching them hypothetically with Hagler and/or Monzon.

Pick ‘em fights, those. If only…