Why can’t Amir Khan win over the sceptics-and the racists?

Just what does Amir Khan have to do to win friends and influence the British fans?

Last week he remarked via a website, that he believed Floyd Mayweather jnr was ’beatable’ and had ‘chickened out’ of fighting him. Of course he is entitled to his view with which we may, or may not, agree, but the response was positively vitriolic – more hurtful even than any blows King Khan has taken in the ring. 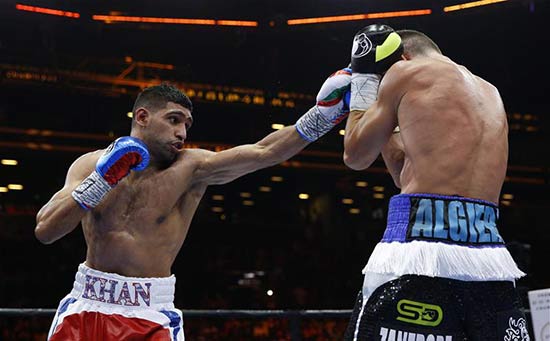 “Glass-chinned halfwit!” was one of the more restrained observations from the actual halfwits who stalk the social media airwaves.

I happen to like Khan, whom I have known since even before he won the silver medal at the Athens Olympics as GB’s only ring representative.

But by and large he has struggled for genuine support in this country and some of the vile abuse he receives via Twitter and websites responses is disgraceful.

I suspect this is one reason why he has preferred to further his career in the US.

I hesitate to think such reaction to the former world champion is racist but unquestionably there seems an element of it here. You only needed to be in earshot of those who taunted him and his family after his loss to Breidis Prescott seven years ago on one of Manchester Arena’s less auspicious nights to understand that.

Yet there are few sports personalities who genuinely have done more to assist good and charitable causes in recent years – or as a Muslim, to take a defiant stand against those extremists who defile his religion.

I also feel sorry for Amir because his career seems in limbo at the moment.

He hasn’t fought since defeating Chris Algieri in May and now it seems that not only Mayweather but an equally reluctant Manny Pacquiao are out of the picture as prospective mega-money opponents.

Like putative politician Pacquiao, Khan has been in Qatar for the AIBA world championships but they failed to meet socially and there now seems no prospect they will do so in the ring next year.

It is unlikely Khan will fight again in 2015 but we hear there is a growing possibility he will face one of his three conquerors, Danny Garcia, in a return in January, by which time he will be 29 and five years beyond the date by which he once told us he wished to retire.

But the media malaise goes deeper than that. As a former sports editior of two national newspapers and long-time boxing scribe I am dismayed at the way the sport has become marginalised in the press generally,

You struggled to find more than an odd paragraph about the Manchester bill – before and after – even in the tabloids.

As the promoter points out this is at a time when British boxing is on a high, with now eight world champions and crowds filling big and small arenas all over the country.

And having covered a multitude of sports, including a dozen Olympics, I can say that none are more accessible to the media than boxing.

It seems it is not only the national press that are footy-obsessed these days. Liam Smith’s big brother Paul tweeted his displeasure at how the Liverpool Echo, once a great all-round sports newspaper, made the city’s first world champion in 23 years a relatively minor downpage story beneath two football pieces.

Back in Minter condition

After Manchester’s showpiece, the sport had another fabulous night on Monday with a record turn-out at the annual dinner of the Boxing Writers’ Club where Mitchell Smith picked up his Best Young Boxer award before an audience which included more than three fistfuls of world champions, past and present. 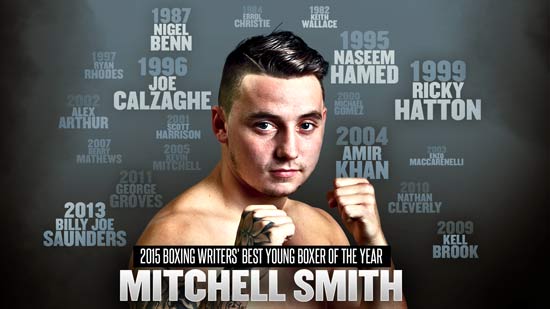 McGuigan was even grabbed for one by the new sports minister, Tracey Crouch, one of my guests. She’s a genuine fight fan, which is good news for the sport.

As always, the inimitable Lloyd Honeyghan was dressed more for the South Pole than the Savoy, resplendent in an ankle-length white fur coat which he insisted on wearing all night – as he did his titfer.

Good to see 64-year-old Alan Minter looking so well, too. The former world middleweight champion has been having a depressing time healthwise of late but his ex-boxer son Ross ’The Boss’ has become his personal trainer, getting his old man in the gym and back in Minter condition, you might say.

Bronze was not the colour artist-on-canvas Joe Joyce wanted to put himself in the Olympic picture in Rio as Britain’s super-heavyweight successor to Anthony Joshua.

Joyce required a gold medal in the AIBA world championships in Qatar to qualify for the Games, but had to settle for losing in the semi-final.

His bronze was the only medal for six-strong Team GB, though there are two more opportunities to book an Olympic ticket.

Unfortunately so tough is the opposition it is already looking as if the glory days of London 2012 won’t be be repeated.

One feature of the championships was the introduction by AIBA head honcho Dr C KU Wu of a programme labelled ‘Heads Up’, with combatants encouraged to concentrate on a more upright stance now that headguards have been removed.

Wu claims that losing headguards actually reduces the likelihood of cut eyes. I am not convinced.

There were still five cut eyes in the tournament and unfortunately one of the worst was sustained by one of Britain’s best young prospects, the iconically-named Bradford flyweight Muhammad Alii, which cost him the contest.

Not quite what the doctor ordered.

On the subject of what used to be amateur’ boxing, over the years I have seen scores of boxers make the transition to the pro game – but few more impressively than India’s Vijender Singh. 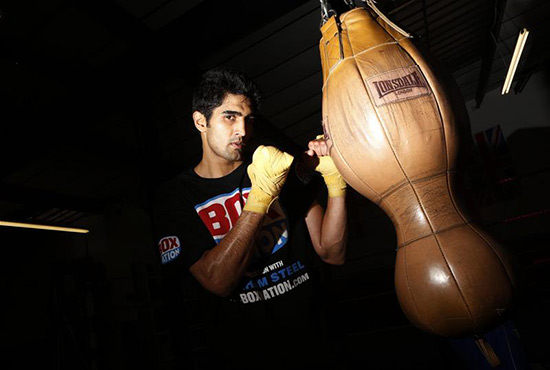 The first Indian-born boxer ever to turn pro, multi-medalled Vijender certainly looked the business in his middleweight debut in Manchester with his brisk stoppage of Sonny Whiting.

Like our favourite curry vindaloo, Vijender is vindaloo-strength hot and we look forward to a second helping at the Harrow Leisure on October 30th where he is sure to have strong local support from the Asian contingent in nearby Southall, where it is said you get the best take-aways in the south.

You can catch my old ringside sparring partner Colin Hart and myself looking back on the greatest scrap we have ever witnessed, Ali v Frazier III, in BoxNation’s enthralling ‘A Fight to Remember’ series tomorrow evening.

We were both present for ‘The Thrilla’ on that morning Manila 40 years ago (there aren’t that many of us left whom were) and have some fascinating tales to tell about when on not only in the ring but out of it.

Coming after the Golovkin–Lemieux set-to exclusively screened by BoxNation last night, it is certainly a weekend for fight fans to remember.

If I didn’t stay boxing I’d have gone and done other stuff like smoke weed and other bad stuff. I’d be out every weekend on the ale. This is not another ‘oh, boxing saved me story…I’m not saying I don’t go out. I do when I’m allowed but boxing has kept me on the straight and narrow

Liam Smith, Britain’s latest world champ is an example of why discipline and dedication pays off 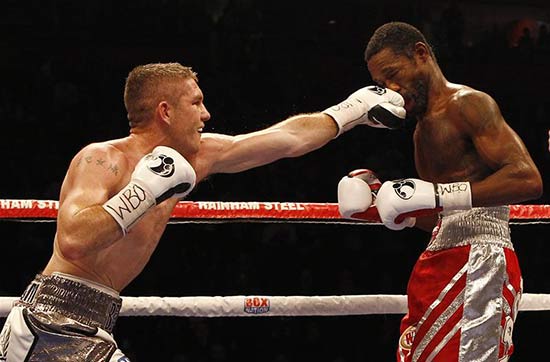 I’m going to be very rough on you because you’re fit, you’re young and you should apply yourself… it was all over the place. It was crash, bang, wallop, but the paso doble lacked total artistry

I feel like an old boxer making a comeback