Why does boxing produce so many Bible punchers?

Religion and I may have parted company some years ago but I respect those who have the faith, whatever that might be.
So I hope I do not cause offence when I say I wonder if boxing is now suffering from surfeit of Bible punching.

Understandable, perhaps, as it was bit of a miracle!

Fervent believer Fury had even wanted to name his son after the Messiah, but was dissuaded by his wife.

The post-fight scenes seemed more akin to a religious convention with a multitude of Fury’s family, friends and acolytes crowding the ring and chanting ‘Amen’ to his every utterance.

Fury’s much-trumpeted Christian faith does seem to sit somewhat uneasily alongside his recent profanities and past distasteful intemperate tweeting. Not least his admitted views on homosexuality and abortion and a new threat to get one of his mates to ‘annihilate’ and jump on the head of the British journalist who published them.

I feel fortunate that he only told me to ‘eff-off’ when I once remonstrated him for the foul language he was using before an audience which included women and children.

The confessional box on Sundays must have made fascinating listening at times during his tempestuous career; but who knows maybe that is all behind him now he has found his heaven on earth with his deservedly-won status as a world champion.

Maybe it because of the very nature of the sport with its inherent dangers that so many of it protagonists turn to religion.
The fight game seems to be littered with Born-again boxers whose constant proselytising seems more suited to the pulpit than the ring. They certainly appear to fear God more than they do their opponents.

I am not decrying it. Each to his own, but I just wish there was a little less wearing of religion on the sleeves of their dressing gowns.

British cinemas have rightly decided that theirs was not the place for religious advertising and I respectfully suggest the same should apply to the boxing ring – indeed any sporting arena.

Not that this is really a new phenomenon. Boxing and religion have gone hand in glove for years, arguably more so than in any other sport. You certainly do not hear Wimbledon winners expressing their religious devotion on the Centre Court, or FA Cup-winning captains thanking God as they collect the trophy at Wembley.

From Muhammad Ali’s conversion to Islam to Manny Pacquiao’s avowed Catholicism, boxers have rarely been shy about proclaiming their religious beliefs and Fury is no different. 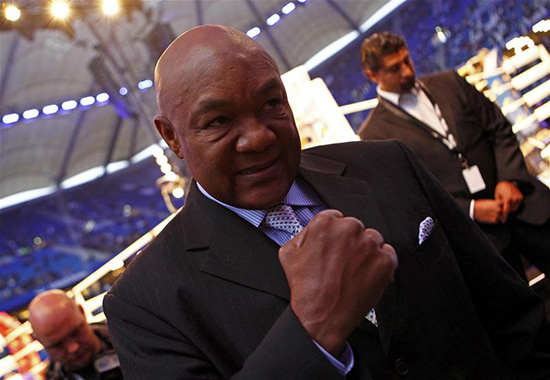 Punching preachers have been with us since the days of the Rev Henry Armstrong, aka ‘Hammerin’ Hank’, the only man to hold three world titles at the same time before being ordained as a Baptist minister. Another ring Rev, George Foreman said he heard God speaking to him in the dressing room the night he lost to Jimmy Young 40 years ago.

He now has his own church in Houston and still preaches there regularly.

Tiger Flowers, world middleweight champion inthe 1920s, was known as the Georgia Deacon, always reciting the same passage from the Bible (Psalm 144 – ‘Praise be to the Lord, my rock, who trains my hands for war, my fingers for battle.’) as he walked to the ring.

Latterly Nigel Benn saw the light to be become a minister with his own parish first in Majorca and now in Sydney, where he lives.

The word of God was never far from Evander Holyfield’s lips, either.

And Pacquiao is on record as saying that he stopped his womanising ways after God has spoken to him personally and told him he was being a bad lad.

He repeatedly talked of his Born-again conversion in interviews leading up to his fight with Floyd Mayweather, even telling the Money Man, himself a Believer, he hoped the pair could study the Bible and pray together after the event. There is no evidence this has happened.

Never mind punching the Bible – they hardly punched each other!

Deontay Wilder, Timothy Bradley and Terence Crawford are among a host of devout American world champions – past and present – whopublicly give thanks to their God from the ring.

Audley Harrison and Frank Bruno were other British heavyweight boxers who displayed religious commitment. Bruno famously genuflected around 30 times before meeting Mike Tyson for the second time in Las Vegas –and still lost. Most religious boxer are either Christian or Muslim. I have yet to hear a fighter give thanks to Buddha for his victory.

Ali’s religion continuously shaped his image and career. He missed three years of fighting in his prime by refusing the draft for his beliefs, which he continued to express despite the controversy behind the Nation of Islam group to which he formerly belonged.

In fairness to Ali, after his initial outburst when winning the title from Sonny Liston, apart from briefly praying in his corner, he never invoked Allah from the ring.

Nor does Amir Khan, unlike Naseem Hamed who, when he fought Marco Antonio Barrera in Las Vegas, was preceded into the ring by an incense-spraying, prayer-chanting mullah.

Naz had told us he could not lose because Allah was in his corner. Unfortunately he seemed to have done a disappearing act, along with Hamed’s skill and stamina that night.

By contrast Khan once told me: ”I don’t take religion in the ring with me. Religion should be private.”

I agree. So please can we have a little less of the Hallelujah chorusing. I think most fans would say Amen to that.