Why Dubois versus Gorman is bound to be a belter 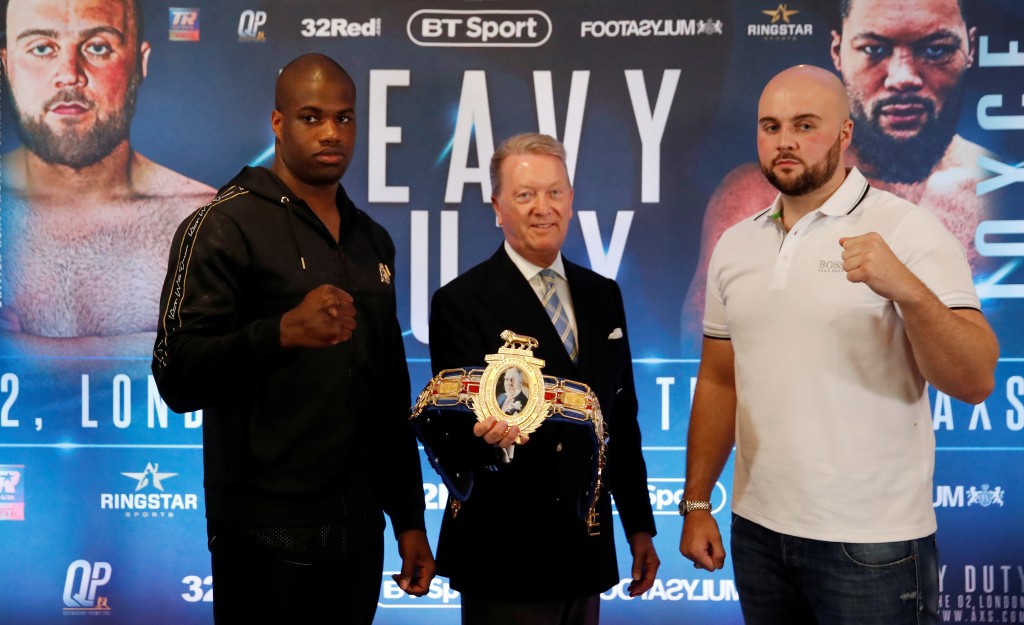 “And the winnah is…” When BT’s mellifluous American ring announcer Thomas Treiber proclaims the victor of the pick’em collision between youngsters Daniel Dubois and Nathan Gorman for the vacant British heavyweight title at London’s O2 next Saturday night (July 13) there is only one certain outcome.

And that is that within moments the President of the British Boxing Board of Control, Charlie Giles will have stepped into the ring to buckle around the new champion’s waist the most glittering prize in boxing – the Lonsdale Belt.

Among the host of rewards in global sport it may not be the richest but it is surely the most beautiful and ornate and is universally revered because it represents a huge slice of sporting history.

It is, as the former Board secretary John Morris says:”Arguably the finest individual trophy in world sport.”

It certainly ranks up there with the FA Cup, the Ryder Cup, Wimbledon Challenge Cup and the Superbowl.

The belt was first presented by Hugh Lowther, the fifth Earl of Lonsdale on behalf of the National Sporting Club, of which he was president, in 1909 to be awarded to all British boxing champions. Lightweight Freddie Welsh on the first holder and 11 times champion, Bombardier Billy Wells the first heavyweight to win one two years later.

Wells’s successor in heavyweight title longevity, Sir Henry Cooper, was the first and only boxer to win three Lonsdale Belts during his 17-year professional career. He made nine successful defences.

In 1929 the BBBofC assumed responsibility for awarding the belt which now costs just under £10,000 to manufacture. Six boxers have won two Lonsdale belts each outright since 1934, which led to the BBBofC introducing more stringent rules of attainment in the 1980’s and 1990’s.

The last winner of two belts was Clinton McKenzie in 1987.

The belt is a coveted prize with great monetary and sentimental value, finding homes in private collections, museums and has been auctioned for large sums of money. Belts have been stolen on numerous occasions, none of which have ever been found. Since 1909, only 161 boxers have won a Lonsdale belt outright across all weights.

In 2013 the BBBofC, in a move to further acknowledge the esteem held for outright Lonsdale belt winners, introduced the Lonsdale Badge, which outright winners of the belt are now entitled to display on their boxing shorts during bouts.

In 1987, the Board had decided to award only one belt to any boxer in each division. A boxer can, however, win belts outright in different weight classes.

On 1 September 1999 the BBBofC changed the criteria for winning a belt outright; boxers must now win four — rather than three — championship contests in the same weight division. The rule also stipulates that one of the four wins must be a mandatory. The then general secretary Morris cited the rising costs of making the belts as the chief reason for the rule change.

The Lonsdale belt won by Bombardier Billy Wells in 1911 is now kept at the Royal Artillery Barracks in Woolwich and is not on display to the general public.[ Johnny Brown’s Lonsdale Belt was donated to the Museum of London in 2010. In 2000 the belt awarded to middleweight star Randolph Turpin in 1956 was auctioned for £23,000.That won by the welterweight Jack Hood in 1926 fetched £36,000.

The belts have attracted theft over the years. The first recorded was Don Cockell’s, which was stolen in 1952 from a glass cabinet at his home in London. Promoter Jack Doughty said: “This is  best belt a boxer can win. It is better than those for world title fights, gold plated with a portrait of Lord Lonsdale in the middle.”

From the contest in the smoke-filled Covent Garden headquarters of the NSC over a century ago, the Lord Lonsdale Challenge Belt remains as tantalising and desirable a prize as any in organised sport. There may be bigger prizes on offer in terms of World and Continental titles, purse and sponsorship, but to win a Lonsdale belt for keeps is the dream of all British fighters.

As the boxing historian John Harding wrote: “Like an Olympic Gold medal, its lustre remains long after the cheers have died down.”

This is what either a jubilant Dubois or Gorman will discover next week when the domestic heavyweight title is disputed for the 111th time.

Unless of course, it is a belting draw, when they will have to do it all over again….