Why Hearn should dry up about Canelo’s ‘rehydration’

Maybe he’s peeved about Amir Khan opting to fight Canelo Alvarez rather than Kell Brook, but Matchroom’s Eddie Hearn seems to have a bee in his bonnet about Amir moving up two weights to challenge for the Mexican’s WBC middleweight title without a ‘rehydration’ clause (whatever that is?) in his contract.

I assume he means a weight limit for Alvarez. Such a clause would limit how much poundage the 25-year-old Canelo can gain after the weigh-in for their May 7 catchweight contest in Las Vegas. Hearn says he sees Canelo ‘rehydrating up’ to at least 175lbs – 20lbs over the weigh-in. 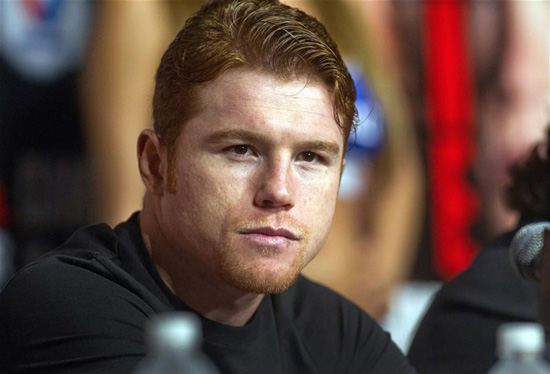 That’s a lot of heavy water, obviously any weight gain is mostly attributed to food intake.

But hang on a minute. Rehydration? Isn’t this the same Eddie Hearn who a few years ago tweeted that his dad Barry was sitting in a sauna with welterweight boxer Lee Purdy, who was trying to make weight a day before his proposed IBF world title the fight with Devon Alexander in Atlantic City by sweating off excess poundage?

That’s called dehydration, which everyone in boxing knows is a major cause of brain damage among fighters who struggle to make the weight.

It is far worse in my view than rehydrating and putting weight on as it takes all of the fluid out of the boxers, especially that in which the brain sits.

If you lose that it can be the cause of head injuries and is one of the reasons the Board of Control don’t allow it, stemming from the days when some boxers needed to train every day in plastic bin liners and such like to sweat out the weight. It’s a nonsense.

And going to a sauna to shed unwanted pounds or ounces, particularly at the 11th hour, is a strict rule breach.

So what was Barry Hearn doing sitting in a sauna alongside one of the Matchroom fighters who was doing exactly that?

No wonder all concerned, including Purdy and fellow boxer Darren Barker, who was in his pal’s corner, were subsequently hauled before the Board and were severely reprimanded and punished following an inquiry.

Maybe Eddie should dry up about rehydration.

As it happened, Purdy, a late replacement for stable-mate Kell Brook, still failed to make the 147lb weight limit and looked so badly drained that he hardly threw a punch, being retired after seven rounds in what became a non-title fight.

Who is running the boxing show at Matchroom?

In his column in The Sun last week, Barry Hearn wrote that he had made an offer of £6m to Khan for him to fight Brook.

I thought Junior did all the deals!

George Groves also said that the negotiations for his own recent fight were conducted with Hearn snr.

It seems nothing has changed there. Eddie Hearn may be at the Matchroom wheel but his old man is still the back seat driver. Sat Nag?!!