WHY MY MAN WINS – TONY BORG 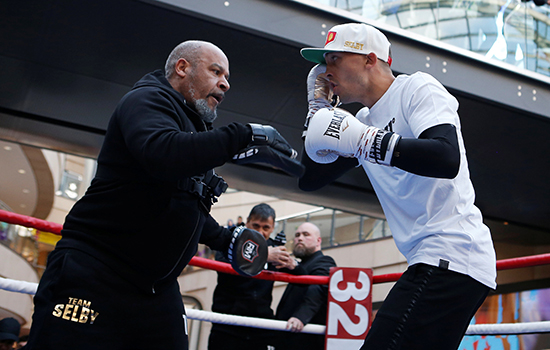 “When Lee’s dad brought him to me, to look after him as a pro 10 years ago, he was already possibly the best technical boxer at the gym. But he was a long way from the fittest.

Lee came from an area where kids hung around doing nothing, drinking lager. He told me he didn’t do circuits! He just wanted to punch the bag, spar his brother Andrew then go home. No hard graft.

Among my small squad, Lee came sixth or seventh in the ground work drills but he dug in deep and within nine months had pulled himself to the front of the pack. Now he can’t wait to get to the gym. He loves his training. It’s a fact that he’s not drunk alcohol since he had a bottle of lager to celebrate defending his Commonwealth title against an African in Newport six years ago. Now he celebrates his title wins eating cheesecake!

Believe me, Lee is anything but cocky. He’s pretty serious, very laid-back. However, in the changing room for an hour before he fights, he becomes very ‘edgy’, a bag of nerves, constantly repeating himself, doubting himself. Then when the call comes to fight, when the lights go on and the music starts, he completely changes. Suddenly, he’s in the ‘zone’, buzzing with confidence, a true gladiator. He just looks cocky!

And he’s going to thrive on walking out at Elland Road to all the hostility. He can’t wait. He loves attention. He always trains hard but if a stranger walks into our gym he instantly ups his game to impress.

I remember taking him to Belfast to defend his British and Commonwealth titles against Martin Lindsay. Martin was from the Falls Road and his fans were proper tough, hard guys; very intimidating at the press conference and weigh-in, and during Lee’s ring walk. But when Lee ducked between the ropes, he just winked at me and with this huge grin he says: ‘This is wicked!’ The Belfast boys booed him into the ring, whistled at him throughout the fight but gave him a big ovation afterwards.

Whereas I view Lee as an elite world class fighter, Josh Warrington is just a very good British level kid. I see Josh’s strengths – his fitness and determination – proving his downfall against Selby. He’ll keep coming. For the first four or five rounds, Lee will use his height and reach, capitalise on his excellent jab and start to mark Warrington up. He’ll then aim at those targets. By the time Warrington gets close, when we allow him to get close, he’ll be very sorry he got there!

Lee has fought these super-fit, strong men types many times before and seen them all off. Stephen Smith fell in eight, Corey McConnell wilted in round five, Evgeny Gradovich round eight, Joel Brunker stopped in nine…All viewed Selby as a tall, skinny boxer-type but he can be a spiteful, nasty b*stard. Latterly, he’s not needed to engage in hard wars because he wants a long career so he can unify all the titles. But if Josh Warrington’s team think he can’t dig deep and hasn’t got gears, they’ll be painfully mistaken.

If the fight ‘kicks off’ from the start, it’ll be to Lee’s advantage, not Josh’s. Selby’s very sharp and very accurate. Warrington’s dad works his corner and he’ll not want to watch his son take a hiding.

Lee wins because he’s super strong and extremely naturally gifted. He’s got the speed, accuracy and movement to sting Warrington twice then move round the corner while Warrington flaps at fresh air. We’ll make him miss, make him pay…..painfully!”