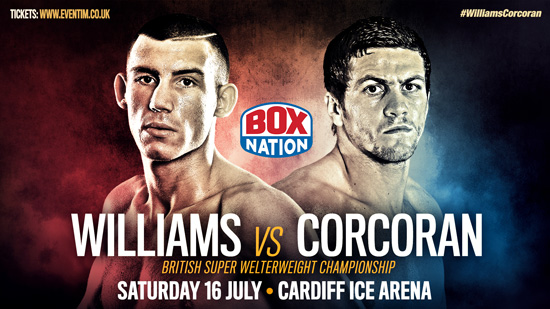 Ex WBU middleweight king Gary ‘The Rocket’ Lockett then explains why his ward from the Rhondda will wake up on Sunday morning with the British 11stone titles still in his custody.

WHY GARY CORCORAN WINS BY PETER STANLEY: “WE EXPECT IT TO BE HOSTILE. WE’LL RISE TO THAT.”

“This is one of the best domestic showdowns that could possibly be made. Styles make fights and this is a real natural. When was the last time you had two boys in their mid 20s, unbeaten in 30 fights between them, clashing for the British and Commonwealth titles?

‘This isn’t a mandatory so we have to thank Mr Williams and Mr Lockett – hat’s off to them for taking this risk – but once Ahmet Patterson was unavailable we jumped straight in and agreed to travel to Cardiff. That’s how confident we are.

‘Gary’s developed nice and quietly, under the radar. After turning pro at light-welter, he’s matured into the strongest of light-middles and, now he’s 25, the timing is perfect for us to take the shackles off.

‘He’s been training for a year solid now and in that time he’s won three quality 10 rounders against Rick Gooding who was unbeaten in 22, Rick Skelton who was undefeated in 13, then he won every round against Danny Butler in a fight everyone said was 50-50, going in.

‘During those 12 months, Gary hasn’t shirked a single challenge in the gym, in sparring or in his fights. Remember, he also accepted to fight Joey Selkirk twice when everyone else was swerving it. We’ve had him away sparring world champions like Kell Brook and David Avanesyan – who beat Shane Mosley recently – plus the likes of Tommy Langford and Bradley Skeete.

‘Mr Williams gets maximum respect from us as the reigning British and Commonwealth champion and, look, maybe he is the big deal. But he’s only had four fights and done eight rounds in the last two years. This is his first real test, every bit as much as it is Gary’s. Ronnie Heffron (beaten by Williams on a sixth round retirement) was just a blown up welterweight. Everyone was queuing up to fight him.

‘There’s no pressure on Gary going into the lion’s den in Wales. He’s a travelling boy, utterly fearless. We’re really looking forward to it. We expect it to be hostile. We’ll rise to that.

‘Technically, Gary’s not that ‘Hellraiser’ tearaway that he used to be. He doesn’t steam forward in straight lines. He’s matured mentally, lost a bit of the rawness. He’s always been very strong with a great engine but his technique has improved immeasurably and he’s a lot more thoughtful.

‘He holds an edge over Mr Williams with regard to his motor and his determination. Gary wins because of the year of hard work he’s put into preparing, plus his will power.

‘Whatever circumstances dictate on the night, Gary will be more than up for it. He’s groomed for every possible scenario.”

WHY LIAM WILLIAMS WINS BY GARY LOCKETT: “LIAM WILL MAKE CORCORAN PAY FOR EVERY MISTAKE.”

‘Firstly, I want to say I have the utmost respect to Gary Corcoran and his team for coming to Wales and accepting this fight. Sometimes things become fraught before a big fight but I expect to shake hands and maybe share a drink with them afterwards.

‘They’re both unbeaten in 15 apiece so it’s a fight that’s gripped everybody. We’re expecting a huge crowd. Liam is a big personality in the valleys, the first British champion from the Rhondda since Tommy Farr in the 1930s. He’s personally shifted 1100 tickets. A very popular boy.

‘Gary trade’s on his toughness but tough isn’t a tactic. Besides, he’s never been in with anyone who can punch. Go on You Tube, and check out the last 30 seconds of round five of Corcoran’s fight against Rick Godding and he gets shaken to his boots ….by a fighter with just three stoppages in 24 fights.

‘Gary doesn’t look to place his shots, he just swings. He’s open to be hit and Liam Williams will make him pay for every mistake. Gary’s not fought opposition of Liam’s level, or who hit as hard as Liam.

‘Liam’s blessed with everything you could want in a boxer. If someone was outfighting him, he has the technical tools to adjust and box rings around them. I see it in sparring all the time and Liam is one of the few fighters who always performs better under the lights than in sparring.

‘And if someone was out boxing him, he has the mindset and arsenal to outfight them. Study photos of those old Rhondda miners and they had rock hard physiques and hands like shovels. Liam’s from that breed. He has that bone structure, looks hard.

‘My most ideal scenario would be for Liam to get a good few rounds under his belt before closing out in sensational style, and he certainly has the capacity to do that.

‘We 100% expect Gary to meet us in the centre of the ring because he can’t outbox Liam. But the minute Liam hits him clean, Corcoran will back off. He’ll certainly not be offering his chin to Liam, as he boasts he will.

Yes, he’s improving but this is a step too far. Trust me, it’ll take someone very special to beat him, and that’s not Gary Corcoran I’m afraid!

‘Liam’s too talented, a far better boxer who hits too hard. It’s been murder taking him on the pads and body bag when he’s wearing those Grant’s gloves. I’m very, very confident Liam stops him.