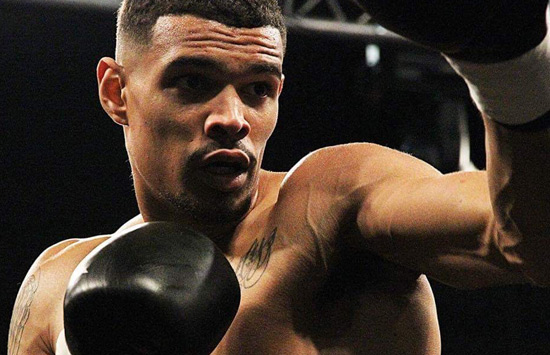 In boxing, fighters’ fathers can be a pain in the posterior. Particularly if they have done a bit themselves. You need look no further than Eubank & Son for confirmation of that.

Geoff Thompson MBE is the latest to join the ranks of lads’ dads. His boy Jordan is one of Frank Warren’s talented newbys, a 6ft 6in, 23-year-old five-and-o cruiserweight with dynamitein his fists. That’s why they call him ‘Troublesome.’

But troublesome is exactly what his old man promises not to be. Like Chris Eubank snr he is a former world champion –though his fighting forte is karate, not boxing. But unlike Eubank snr he vows not to meddle in his son’s ring career.

In this week’s remarkable Big Interview here Jordan revealed how he converted to boxing from tennis – where as a teenager he was one of Britain’s top ten- because he felt his face didn’t fit. He maintains it was the wrong colour as he is of mixed race.
I have known Geoff his lovely family for years. He is one of the best and most honest sportsadministrators I have ever encountered.

For almost well over two decades now he has run the Manchester-based Youth Charter for Sport, non-Government funded body which does admirable work in taking sport into communities which are often the exclusive domain of the underprivileged and unruly.

In my view he has done more than anyone in Britain to make sport an antidote to the culture of guns and gangs in troubled areas such as Moss Side and Liverpool’s Toxteth.

There they call him ‘Mr Heineken” because he gets to the parts others cannot reach.

Five times a world karate champion, there’s no one you’d feel safer with walking the meanest of streets.

Geoff should have been head of Sport England or UK Sport but his face didn’t fit, either. Not because it is black, but because he speaks his mind and asks awkward questions. And that oursporting Establishment do not like.

Thompson knows his son won’t encounter prejudice of any kind in boxing. Nor has the 59-year-old original Karate Kid any need to get his kicks vicariously through his son.

Jordan has his first fight under Frank’sstewardship and new trainer Haroon Headley on the massive Manchester Arena card April 8th which heralds the union between BoxNation and BT.

While Thompson snr will be as visible at ringside as Eubank snr always is – that’s because at 6ft6in himself he is as tall as his son – he certainly won’t be in his corner. At least, not physically.

“Yes, I’ll be cheering him on but I won’t be telling him what to do,” he says. ”That’s not my job. It is not my style to interfere. He now has a great promoter in Frank and an excellent trainer inHaroon, who I first encountered through the Youth Charter.
I’ll leave the boxing matters to them.

“I know how fit and strong Jordan is because I’veworked out with him in the gym – for my benefit, not his.

“Would I spar with him? You must be joking –there’s no way I’d risk taking a right hander frommy son!”

Mum Janice will be at the Manchester ringside too. She is also a former world karate champion which surely accounts for Troublesome’s inbuilt fighting instinct.

Such is Jordan’s punching power – since he turned pro last year four of his five opponents have lasted just five rounds between them – that you might say his boxing career is already shaping up to what he had hoped to achieve in tennis: A Grand Slam.

We are looking forward to seeing you too. Liam Walsh is ready. We are ready. #LetsGetItDone#DavisWalsh @LEllerbe @FloydMayweather
Frank Warren (@frankwarren.tv) 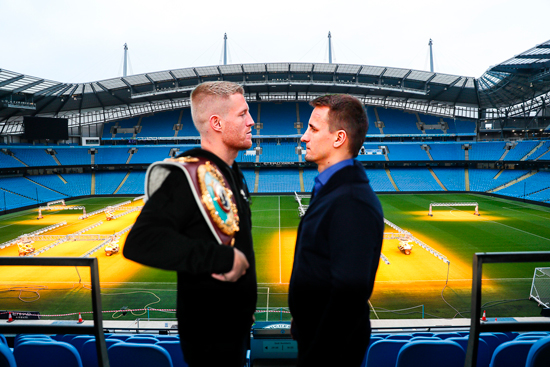 If Golovkin was a tough assignment then Spence, arguably the jewel in the crown of Al Haymon is not far behind. Spence is a terrific puncher, knocking people out from long to middle range

Come fight night, Beefy just switches on. Pundits are always commenting on how he snarls and smiles at opponents, goads and baits them, whilst remaining calm himself. If anyone tries roughing it, drops the nut in or lands a bollockshot, they can expect one back immediately. Beefy just relishes fighting. He’d spar every day if I’d let him. He’s got a natural fighting mentality.

Tony Blair is yesterday’s man. He’s like the heavyweight world champion who needs to come back and make some money but gets knocked out first round. At the end of the day Blair will be on the canvas!

It is total and complete bullshit

Veteran promoter Bob Arum disses a report that Manny Pacquiao and Amir Khan will fight each other in Manchester or Bolton. Though he later acknowledges that talks are ongoing for a possible multi-million dollar coupling in the UAE

Coming up next: The Big Interview with Sunny Edwards