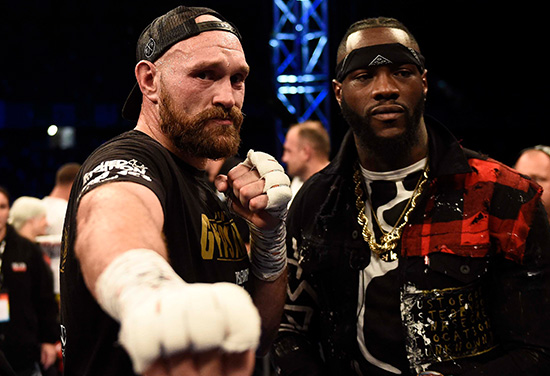 IT IS THE QUESTION on every fight fans’ lips, certainly the one I am asked most frequently whenever I talk boxing with my mates.

I confess I don’t know. I am unashamedly fence-sitting on this one but what I do know is that I wouldn’t put anything past the cantankerous Gypsy King.

Ignore the ‘fake news’ being put about by those, Fury’s British promoter Frank Warren terms ’green-eyed monsters’ to the effect that the blockbuster bout won’t happen.

Both Wilder and Fury insist that it is on. ”One hundred per cent,” says Warren, who has secured the most intriguing, contrasting  fistic collision of styles for exclusive screening in the United Kingdom  by BT Sport, who are now going shoulder to shoulder with Sky in the pay-per-view battle.

It is a massive ask for even a slimmed-down Fury, who has shed around 10 stone since his boxing hiatus, to overcome the thunder-punching spindly-legged American on his home patch later this year.

But then, I did not give Fury a hope in hell of beating Wladimir Klitschko in Germany three years ago but he confounded us all and in the end we were left with more egg on our faces than the Ukrainian had blood on his.

Wilder is a much taller order, not so much physically but in terms of destructive power. Fury has never faced anyone who hits more venomously.

True, Klitschko could punch but his attacking technique was predictable. Fury never allowed Wladimir’s fists near his face, having it away on his toes whenever the long-standing champion cocked those mighty mitts.

Wilder, however, comes at you like a gale-driven windmill, his roundhouse punches smashing through the most impervious of guards, as one-round victim Audley Harrison and the 39 others he has despatched with terrifying ruthlessness since turning pro after winning a bronze medal in the Beijing Olympics will testify.

Fury says he will have to catch him first but for all his skilled footwork he can be vulnerable. His backside has visited the canvas as a professional but he has always got up to win.

No one can blame Fury for taking the chance he has been offered, one that has put Joshua’s nose out of joint without a blow being landed

As a subscriber to Boxing News, 30-year-old Fury doubtless would have found the piece last week by another giant British heavyweight, the 6ft 6in Richard Towers, of considerable interest.

Towers has sparred with just about every heavyweight of note, including Wilder, Fury and current multi-belted world and Olympic champion Anthony Joshua.

He reckons Wilder has a type of power he has never experienced from any other heavyweight. “It felt like a horse kicking me.”
He adds:”No disrespect to Tyson, but I have to be honest and in my opinion this is the wrong type of fight to take right now. It really is.”

Well, we shall see.

It has always been my view that the Fury who out thought, outfought and outfoxed Wlad would beat Wilder and Joshua too.

But time and history may be against him now. We do not know how much of that fabulous Fury is left.

Muhammad Ali tried something similar nearly 50 years ago and failed.

After being in exile for three years and seven months, he came back and stopped two top-ten fighters — Jerry Quarry and Oscar Bonavena.

The Greatest, five months after coming back, thought he was ready to take back his title from Joe Frazier.

But he found he was taking on too much, too soon.

He was unanimously outpointed and his unbeaten record was gone.

In total, it took Ali four years and 17 fights before he reclaimed his title by knocking out George Foreman in the Rumble in the Jungle.

Foreman took much longer to regain a version of the crown.

It was seven years and 29 fights after he came back following a ten-year retirement before he KO’d Michael Moorer.

No one can blame Fury for taking the chance he has been offered, one that has put Joshua’s nose out of joint without a blow being landed.

Even if he should lose to Wilder it won’t lessen the box-office appeal of a domestic grudge-match with Joshua.

And if he should return from the US with the WBC belt, AJ and his promoter, Eddie Hearn, who have refused a Wilder fight, would be scraping the egg off their faces too.

With the ever-enigmatic Fury it is always the tale of the unexpected.

He says that in his mind he is the best heavyweight who ever lived.

Those of us fortunate enough to have witnessed Ali, Joe Frazier, George Foreman, Sonny Liston, Larry Holmes and Lennox Lewis in their prime or at their peak would strongly demur.

But should he surmount Mission Impossible and unseat both Wilder then Joshua as comfortably as he did Klitschko then he certainly would be hailed as the greatest heavyweight of his time, and rightly so.

TALKING OF TYSON FURY – and indeed who isn’t – he seems to have been minding his language of late, but I smiled to hear Fury give thanks “to the Lord Jesus Christ” for his points victory over Pianeta before promptly labelling Anthony Joshua, a “s**thouse”. 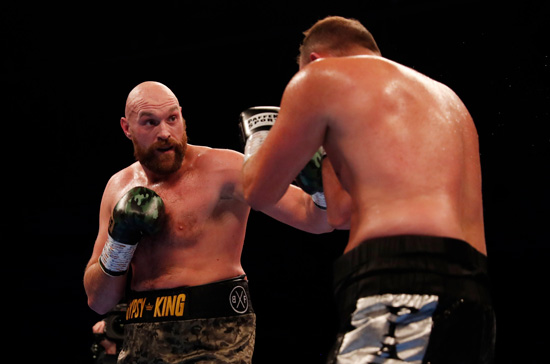 He then told the onlooking Wilder: “I’m going to knock you the f*** out.”

It reminded me of another occasion when I covered a fight in Belfast a few years back and afterwards was asked by my newspaper if I could interview the volatile, fire-breathing cleric, the late Rev Ian Paisley.

I tracked him down to a church hall in the suburbs where he was giving a typical hell-and-damnation sermon. When I gingerly approached to ask if I might speak to him he bellowed: “Can’t you see I’m on God’s business? Now f*** off!”