Will Amir’s snub lead to split with Big Al?

Amir Khan has spent most of his career trying to avoid getting hit on a vulnerable chin (not always successfully) so it seems ironic that having done so in his last few fights he should now get kicked in the teeth. By Floyd Mayweather Jnr. 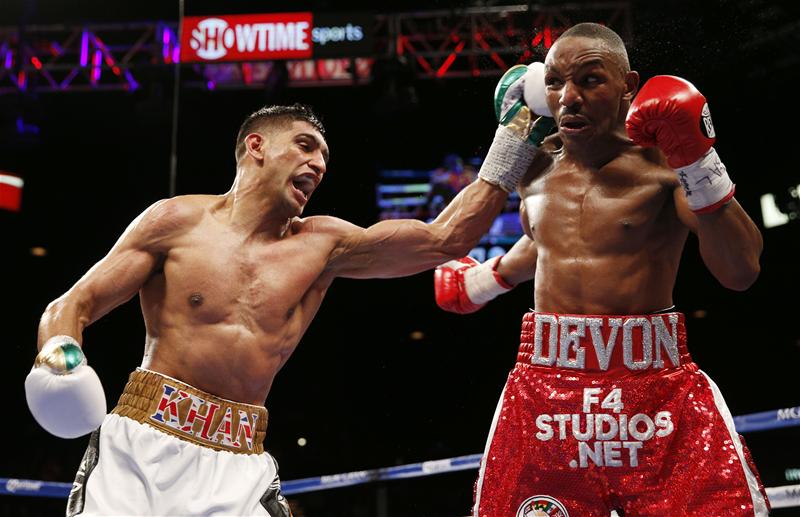 Mayweather’s widely-expected choice of fellow American Andre Berto for what he claims will be his ring swansong in Las Vegas at the MGM Grand Garden Arena on September 12 understandably has left the boxing world somewhat underwhelmed, and Khan more than a little peeved.  It suggests there may be some credence in the growing theory that Mayweather, at 38, believes the decade-younger Khan may be too fast for him.

Khan’s adviser is the new Mr Big of boxing Al Haymon, who is Mayweather’s man as well as the Godfather figure to a whole host of other top fighters. Including Berto.

The Twitter telegraph buzzes with rumours that Khan is so irked at again being gazumped, this time by a fighter from his own stable- Berto is also trained by Virgil Hunter – that he might well walk away from Haymon and do his own thing.

Being by-passed by Manny Pacquiao is one thing, by Berto another.

Despite 31-year-old Miami-born Berto being a two-time welterweight world champion, he has lost three of his last six contests since 2011. It is an odd match-up at best, although there have been many worse in boxing.

The man billed as The Beast is widely seen as an easy touch for Mayweather; a go-forward fighter of diminishing ability who will be vulnerable to the welterweight champion’s cute counter-punching.

So why has Mayweather picked him for his 49th appearance, the last of a six-fight deal with broadcaster Showtime? Simply because he knows he can do what he likes at this stage of his career, and Berto presents a reasonably low risk to his reputation.

As a resident of the world’s most famous gambling citadel, the Money Man always wants all the chips stacked in his favour.

Mayweather says this will be his valedictory performance but I seriously doubt this will see the last of him. Didn’t he say the Pacquiao fight was to be his finale? 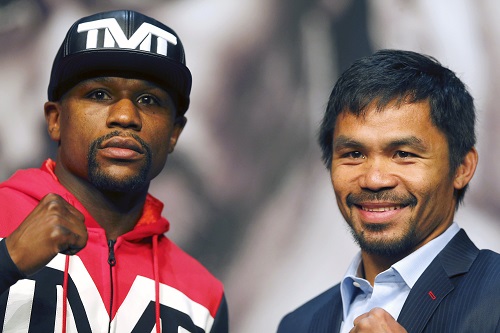 His ego is such he will want to be remembered as the man who actually broke Rocky Marciano’s record, and not just shared it. We will see him back next spring – possibly against Khan but far more likely in a return with Pacquiao, who he knows he can beat, and maybe then go out in a blaze of glory as the record-breaker. You can bet on it. Mayweather certainly will.

For the record, Rocky Marciano’s 49th fight was against Archie Moore on September 21, 1955 when Moore went up in weight to challenge The Rock for his heavyweight title.

Moore briefly dropped Marciano in the second round (only the second  time Marciano had ever been knocked down), but Marciano recovered and floored Moore five times, stopping him in the ninth round to retain the undisputed title and create the record.

As for Khan, as he says there are plenty of big fights for him out there – Keith Thurman, Timothy Bradley, Shawn Porter, a return with Danny  Garcia. And Kell Brook, of course, which he says definitely will happen next year.

Unless Mayweather calls of course.  But Khan’s breath will not be held.

The influence of Al Haymon is ominously spreading across the Atlantic.

The IBF featherweight champion Lee Selby is the latest British fighter to team up with the reclusive American music industry mogul who is rapidly becoming the dominant global force in boxing.

The Welshman has signed a three-year deal to work with the Haymon organisation, which also now advises other British world champions James DeGale and Carl Frampton as well as Amir Khan.

Selby says Haymon can take him  to ‘a different level’  though he will still be managed by Chris Sanigar.

But it now seems he will be fighting mainly out of the US, and the word is certain other British fighters are considering taking the same route.

Among those believed to be thinking of joining up with Haymon is Chris Eubank Jnr. If so, won’t it be be fascinating to see how Big Al deals with his dad?

A young Yorkshire flyweight currently boxing for Britain in the European  Championships in Bulgaria certainly has a name to live up to. It is Muhammad Ali.

This Ali, aged 19, is part of a seven-man British team squad competing in a tournament that acts as qualification for this September’s World Championships in Doha. I hear he really is the business.

In April, little Ali won an ABA title in only his third senior bout. But his ring hero is not his namesake –it’s actually Amir Khan.

Like Amir, Ali is a product of Bury Amateur Boxing Club, where he is trained by Khan’s old mentor Mick Jelley.

Jelley believes Ali has the talent to emulate Khan by qualifying for the 2016 Olympics in Rio, before making a successful pro career. “I’ve only ever told one lad to turn pro and that was Amir Khan,” says Jelley, who also trained current WBA super-bantamweight champion Scott Quigg.

“But Mo wants to go pro eventually and I think he’s good enough to go all the way.”

Muhammad Ali. It’s a name to watch, and certainly one easy enough to remember.

Nothing sheepish about Jim

Ubiquitous is a word that might have been invented for Jim Rosenthal. Whether its presenting two-fisted boxers on BoxNation or four-legged boxers at Crufts, he is the smoothest of operators. As The Sun’s TV critic said this week he is’ the ultimate TV professional, master of every sporting brief (no matter how crackers).’

How true. You can now catch him doing the commentary on ITV’s latest celebrity wheeze called Flockstars, a sheep-herding competition. ’ Even for the man who can turn his voice to anything this latest gig is a bit bizarre. Or should we say baa-baa? .

“I’m a domestic fighter at best, that’s it. He’s a class act.

Tommy Coyle acknowledges he knows his place after losing the battle of Hull to Luke Campbell.