Will boxing’s tale of two cities have a twist in the tail? 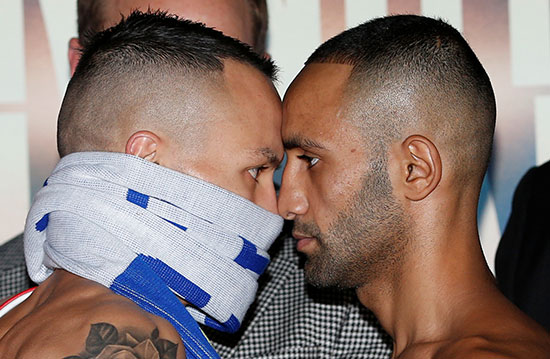 HUBBARD’S CUPBOARD
By Alan Hubbard
In January the headline over this column predicted: “A happy New Year for Josh Warrington but a shock defeat for AJ.”
That was my thought for 2019 and without any excessive trumpet blowing I predict that this Saturday night will see double success for the Queensbeery men in boxing’s tale of two cities. In Leeds I see Josh Warrington, who along with Tyson Fury tops of the poll for Britain’s favourite fighter, emerging victorious in his IBF world featherweight title defence against the sleek and slippery Kid Galahad.
While a little later over in Las Vegas at Tyson  Fury seems certain to put on another eye-catching display against the unbeaten but worryingly unknown heavyweight from Germany,Tom Schwartz.
But of course you never can tell. Virtually anything goes in boxing these days as the old game knows only too well after Anthony Joshua’s Rocky horror show at Madison Square Garden recently.
That seismic shock –number ten on the ring’s Richter scale will be uppermost in the minds of the two favourites as they go to work with their contrasting styles and personas.
It is a certainty of course that both will produce entertaining performances and in Warrington’s case I expect him to box equally forcefully as he did to vanquish both Lee Selby and Carl Frampton ag against the bookies’ odds.
Of all the current top quality of British fighting men I rather like the redoubtable and resource for Warrington best.
Sheffield’s contender in this  all out war of the White Rose has both skill and impudence he reckons he will outspeed and outbox the the hugely supported Leeds warrior who rarely takes a step backwards.
However I think this is not only a war of fists but of wits and one that will be decided in the corners as much as mid ring..
Respective game plans will have been worked out by two of the most astute coaches in the business. Warrington’s dad, the ebullientt laugh a minute Sean O’Hagan who, according to Josh does his best thinking on the loo with his Ipad,notebook and a packet of ciggies, and . Galahad’s trainer ominic Ingle, son of boxing’s much loved and lamented Brendan who changed the fighter’s Islamic name from Abdul Barry Awad in the hope of making him more saleable to the public. Ingle, who prefers to draw up his boxing blueprint in the old school Wincobank gym will tell Galahad to concentrate on what he does best, jab and move and try and force Warrington onto the back foot.
He may have some success in the early rounds but I do not think he has a pedigree to keep off the swarming Warrington over the distance. Nonetheless there could be drama for the those watchingh BT’s  live telecast at home. I see Warrington taking another unanimous points decision.
Over in Vegas Fury we will be looking to turn on the style as usual and then stop Schwarz around halfway in a contest that will be live on BT box office in the early hours of Sunday.
Tyson is likely to want to up the tempo just to flush out another warning to Deontay Wilder with whom a reprise is anticipated next year. Personally I believe that with his new found inner strength and of peace of mind Fury could beat any heavyweight in the world at the moment. st as most think he did Wilder when engaged in that highly dubious draw. We simply do not know enough about Schwartz except that he is young, fit. has a digand seems confident enough of upsetting boxing’s well laden apple cart.

It seems well worth settling down foir the night and tuning in for what could be a veritable feast of fisticuffs and, who knows, it there might well be another twist in the tale of two cities