Will Liverpool fans be singing ’Derry Cross The Mersey?’

We are barely into 2016 but I have a hunch that a contest we are about to witness as early as February will end up being one of the great fights of the year.

Terry Flanagan v Derry Mathews really whets my appetite. It has all the portents of a classic, an intense and fiercely-contested a domestic derby at least in the same league as those football counterparts from respective clubs in Manchester and on Merseyside.

Funny, but fascinating old game, boxing. Less than three years ago, before Flanagan and Mathews became renowned as the Turbo and Dirty Derry, they scrapped for a few quid in Prizefighter.

I don’t see how this can fail to be a memorable encounter with all the pride and passion involved.

While at this stage I take Flanagan to win it could be a pulsating punch-up much in the mould of Saunders and Lee, and just as close.

But should Mathews prevail, no doubt his legion of Liverpoool fans will be serenading him with ‘Derry Across the Mersey….’

Boxers are renowned for pitching in with charitable work, helping out good causes and responding to requests from fans.

So it was no surprise to learn new WBO world middleweight champion Billy Joe Saunders gave up one of his days to make the day of a yong Nottingham schoolboy who yearned to meet him, and said he wanted to become a champion just like him. 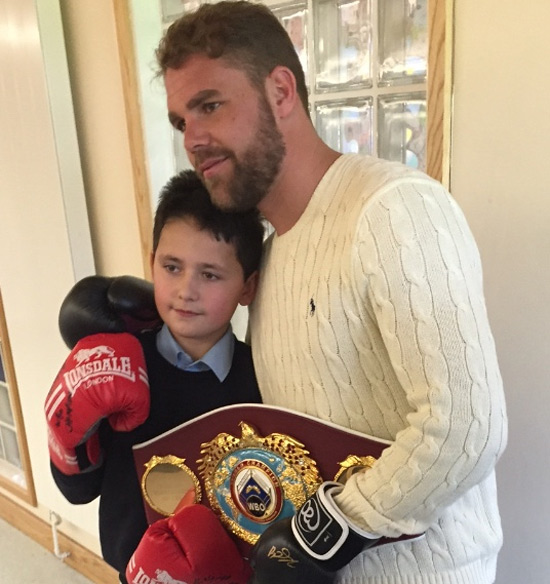 Saunders had received a hand written letter from nine-year-old amateur boxer James Dean who said he was s hero and invited him to the Bishop Alexander LEAD Academy in Newark to give an inspirational chat to the kids in his class.

At the time Saunders was deep in training in Marbella for his title challenge a but promised to go and see James after he’d beaten Andy Lee and that he would take the WBO title belt along with him.

He duly obliged last week, turning up at the school as a surprise to meet a shocked James and chat to his classmates for over an hour.

He spoke about how and why he got into boxing; the dedication and training he had to put in to become, at 18, the youngest member of the 2008 GB Olympic boxing squad; the transition into professional boxing and becoming a British, Commonwealth and European champion and ultimately a world champion, and the importance of dedication and perseverance, before taking questions from the children and then tucking into a roast dinner alongside them in the canteen!

“Just coming to the school and meeting James and the other children in the class gave me such a lift, knowing that I can inspire at least one of these kids’ to succeed then I know I’ve given something back,” said Saunders.

“Being world champion isn’t just about money, cars and flash things, which are nice, but it’s a position of responsibility and to kids like James, he looks up to me as a role model.

“I said to them, you can achieve anything in life as long as you work and work and work at what you want to achieve and you will succeed, you need to have drive and ambition and never take a knock- back as a failure but as a stepping stone to your goal.

“Whether you want to become a world champion boxer, a Premier League footballer, a doctor or a lawyer or plumber or builder, you need desire, commitment and hard work, that’s what was driven into me to succeed and it has proved true.”

As for star-struck James, he declared: “It was unbelievable seeing Billy Joe , who I’d only ever seen on TV, walking through our school gates and come and speak to me.  It’s a day I will never ever forget.  I’ll be a world champion like him one day.

Good for him – and good for Billy Joe.

An intriguing interview by Steve Lillis with veteran US promoter Bob Arum on BoxNation last week which showed there is plenty of life in the old fox yet. Uncle Bob that is! 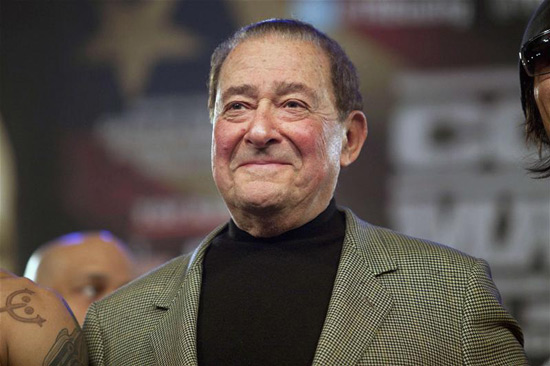 The indomitable octogenarian talked fascinatingly of great fights and fighters he has promoted and known and of his relationship with promoters includuing Frank Warren, Harry Levene and, of course, Don King, of whom he said: “He’s an old dinosaur but we now call each other friends.”

If you missed it, no doubt there will be a repeat. Well worth watching out for.

Beating Manchester lads for big titles is nothing new to me, I remember seeing off Steve Foster and Anthony Crolla. Next month I’m going to make it a hat-trick of Mancs and this time it’ll be for a full genuine world title.

No doubt in the mind of Derry Mathews who will emerge victorious when he meets Terry Flanagan.

“This business is not fair and it has never been fair. I have beaten men that have gone on and won British titles. I have pushed contenders really hard and never got a shot at a bigger title. Anyway, that is different now because my face fits. I’m not the outsider any longer.

Irish welterweight champion Peter McDonogh (25-28-1) has emerged from shadows of journeymanship at 38 to be a serious contender.

*****************
You can say what you want about Tyson Fury, make fun of him, but there’s one guy in the US named Michael Gerard Tyson who’s so proud he has my name. He is the best heavyweight champion of the world since myself. He is the man, I don’t care what anybody says.

Praise from Caesar – or rather Mike Tyson – for the new champ.

Wonder if Chris Eubank still feels the same way after learning that his boy’s tussle with Nick Blackwell is to be staged in a Kent shopping centre?