WILL MANNY STILL PAC A PUNCH IN VEGAS ? 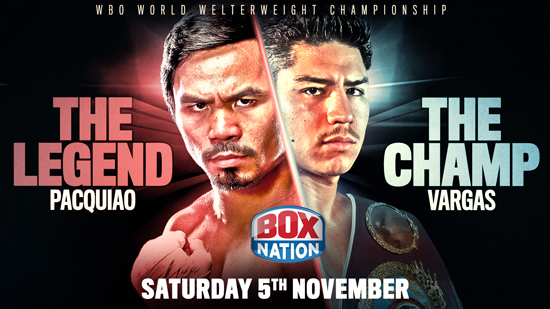 BoxNation viewers will need to top up the coffee pot on Saturday, or whatever else gets you through the night, as we have a marathon stretch of boxing that dedicated fight fans will not want to miss.

When the cameras have stopped rolling at the Titanic Exhibition Centre in Belfast, we switch over to Vegas and the Thomas and Mack Center for a world title feast headlined by one of the genuine legends of the game.

Eight division world champion Manny Pacquiao is seeking to bag another belt by taking on the WBO welterweight champ Jessie Vargas. While, at 37, the curtains must be drawing in on his magnificent career, word has it we aren’t about to see the last of him just yet.

The word retirement was bandied about after his last fight against Timothy Bradley in April, but his wise old promoter Bob Arum was having none of it and always insisted he was expecting the call to begin negotiations for a 67th professional career contest.

Despite being elected as a senator in his native Philippines, where he will serve a six-year term, Pacquiao clearly still has that fire in his belly and perhaps even some unfinished business to attend to.

Rumours of a return fixture with the ‘retired’ Floyd Mayweather jnr refuse to go away, even though the first didn’t exactly have us teetering on the edge of our seats.

Some people might imagine it would be a tough sell second time around, but look at it this way. If it does only half as well numbers-wise as it did last time, it would still generate an incredible amount of money.

There will still be an appetite for it and it will be more about what didn’t happen last time, what Pacquiao couldn’t do with all the talk about a shoulder injury.

If Bob wants to keep it in-house then the potential fight against Terence Crawford has got people talking, while the Top Rank guru threw another one into the pot this week when he dropped in that Pacquiao v Vasyl Lomachenko is the fight he would most like to make.

All of this is assuming he can negotiate the threat of the rugged Vargas who, amid all the fanfare, people shouldn’t forget is the champion with ambitions of his own.

Vargas will need to find a way to counter the snappy flurries of punches that are the trademark of Pacquiao as he has only forced one stoppage since July 2007.

Pacquiao hasn’t triumphed via KO since he stopped Miguel Cotto in the 12th round in 2009, so we can probably see the method of victory likely to come about on Saturday night.

It should be a fascinating watch and well worth staying up for, especially with three other world title encounters on the card.

Coverage from Vegas begins at 1am