WILLIAMS BACK TO HIS HAPPY HUNTING GROUND 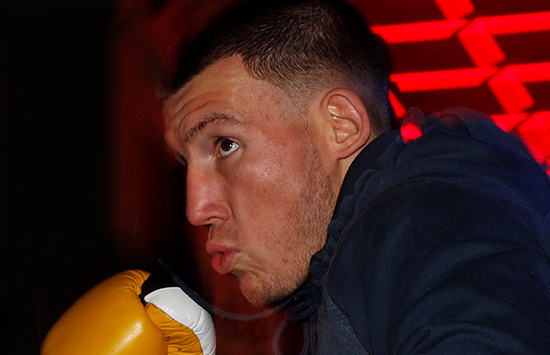 Around 18 months or so ago, competing for a world interim title was probably the furthest thing from the mind of Liam Williams. His thought process at the time was plagued with nagging doubts over whether his hand would stand up to the rigours of heavy punching again.

Two operations on his right hand kept the Clydach Vale native out of the ring for a year, a period of time where the prospect of seeking alternative employment did begin to loom close.

Once the pain had eased and confidence was restored in his favoured weapon, Williams took the plunge at the same Manchester Arena where he will on Saturday take on Liam Smith for the WBO Interim world title, with the likely prize for the winner being full world champion status – given the unlikelihood of Canelo Alvarez operating at super welterweight again.

He went straight back in at the deep end, defending his Commonwealth title and also challenging for the vacant British title against Kris Carslaw in December of 2015.

Double surgery did not result in any power failure for the now 24-year-old. Carslaw was dismantled with a thudding jab and the Williams show was back on the road.

Three fights later and he is now on the brink of the big league, fully appreciating how far he has come in such a short space of time.

“Yes, it is one of those where I thought I could have been finished,” he conceded. “To come back and achieve what I have in just a few fights is amazing really.

“I thank my lucky stars each day because I am in a great position now.”

The first appearance of Williams at the boxing Mecca of Manchester ran true to form, with his fifth fight as a pro lasting just over a minute.

The venue also played host to his first major examination and his breakout night in July 2014. Similar to this Saturday when Williams and Smith usher in the ‘New Era’ of boxing on BT Sport, the Welshman entered the arena not the favoured fighter with the bookies.

He turned the formbook on its head.

“The Manchester Arena is a good venue for me and I’ve put on good performances there. It is where I took apart Ronnie Heffron, done him in six rounds, when again I was the slight underdog going into the fight.

“I was expected to lose and look what happened there when the pressure was on.”

Heffron, whose brother Mark makes his first appearance under the Frank Warren banner on the same card this weekend, retired at the end of the sixth round after Williams made a statement of future intent. 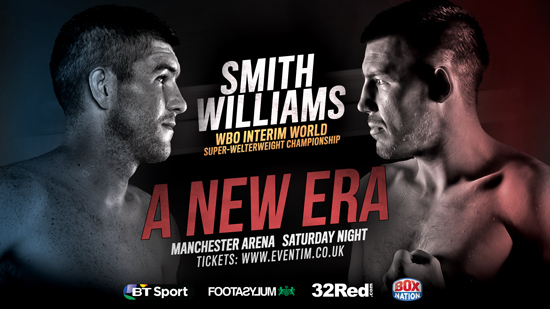 “I am a slight underdog again now and it is a fight where I feel the same way as when I was going in with Heffron. I was up against it but I knew, if I performed, I would get a good win.

“I believe this is going to be the same kind of fight.”

Williams v Smith is a match made by public demand, but it now has significant bling attached to it in the shape of the Interim title.

It is a big prize on the line and Williams believes it is fight deserving of such a reward.

“It means a little bit more, don’t get me wrong. I think the fight needed that bit of something, to be honest with you, because it is a great fight and everyone is really excited by it.

“I think it gives it a bit of extra excitement and provides something for both of us to come out of it winning – something to show for the fight.”

Williams agrees that waving around his WBO European title after a victory in this one wouldn’t have fitted the bill.

“Personally, if this title wasn’t on the line, I didn’t really want it to be for any title because, to put a British or WBO European on it, kind of downgrades the fight and takes the shine away from it.

“The fight is a lot better than that so I would have rather it been for no title. It is now a big bonus that this has now been thrown into the mix.”

For the winner there can be no turning back as elite level fights will soon be in the pipeline, with Miguel Cotto in pole position for a tilt at the full title.

Williams is convinced over his readiness to operate full-time at the super welterweight top table.

“Yes, 100 per cent. I have got myself to this stage and after this, you can’t say you want another one or two learning fights.

“I wouldn’t want to do that because I believe I’m ready. In hindsight, I would probably have liked to have been at around 20 fights at this stage, but I am still confident in where I am at now and the experience I have gained to win these fights.”

First up is Saturday’s job in hand and the hands of Williams are working just fine now.